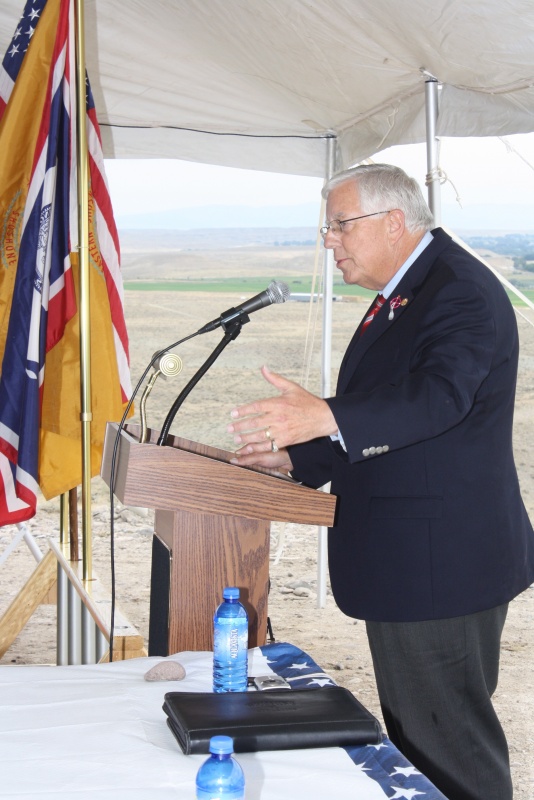 Draft legislation by Enzi, and supported by Sen. John Barrasso, R-Wyo., would eliminate the reservation status of a significant portion of Northern Arapaho and Eastern Shoshone homeland in central Wyoming, according to the news release.

Enzi’s Washington office, however, said the bill clarifies the boundaries of the Reservation as established in law in 1905. “Senator Enzi is not proposing to withdraw any lands from the Wind River Indian Reservation,” Press Secretary Daniel Patrick Head told County10.com Wednesday morning in an email.  ”Senator Enzi doesn’t want to change the current reservation boundaries. He wants to make sure they stay as they have been for decades. The delegation’s legislation would keep things as they are, neither adding to nor taking away reservation land.”

Head said there has been misinformation spread about the legislation.  ”Senator Enzi and the Wyoming delegation continues to work on legislation with the tribes, state government, Fremont County and the City of Riverton.  The bill is being drafted to allow the EPA to treat the reservation as a state for purposes of air quality monitoring, but with the boundaries of the reservation as they were established before the EPA’s erroneous decision that Riverton is part of the reservation,” he wrote.

The bill, according to the release, is a response to the U.S. Environmental Protection Agency’s decision to treat the Wind River tribes as a state under the Clean Air Act. A detailed legal analysis in the EPA decision concluded that the town of Riverton is part of the Wind River Reservation, a position the tribes have always held.

“Wyoming Gov. Matt Mead has asked the federal courts to determine whether the EPA analysis is correct. Enzi has decided instead to change the law. In doing so, Enzi has turned his back on his approximately 15,000 tribal constituents in Wyoming, Northern Arapaho leaders said,” again quoting a news release.

Northern Arapaho leaders traveled to Washington, D.C., last week to confront members of the Wyoming’s delegation about the bill and their opposition to the tribes’ treatment as a state application.

“We asked them to reconsider, to open their minds and work with us in good faith,” said Councilman Al Addison, “but they were not interested.”

Head, however, said the tribes were invited to comment on the draft legislation, which he said was sent to them in advance for review and comment. “As far as status, we sent it to the tribes last week and asked for comments by the end of this week.  Depending on comments the delegation may or may not introduce the bill next week,” he said.

Tribal leaders made a call Tuesday for support and prayers from Native American people and governments everywhere. Tribal people must work together to prevent the loss of any more of our precious homelands, Chairman O’Neal said. “If the Wyoming Delegation can do this to us, they can do it to any tribe in the nation,” O’Neal added.

Enzi was part of a similar anti-sovereignty campaign during the Northern Arapaho Tribe’s successful effort to secure gaming more than a decade ago. Once again, Enzi has demonstrated he is no friend of the tribes, tribal leaders said.

“We’ve seen these kinds of tactics from Senator Enzi before,” said Northern Arapaho Business Council Co-Chairman Ronald Oldman. “They didn’t work in our gaming case, and they won’t work here.”

By The Ranger staff reports

The Arapaho and Shoshone tribes and the Department of the Interior, through the Bureau of Indian Affairs and the Bureau of Land Management, signed a memorandum of understanding Feb. 25 in Fort Washakie.

Through the MOU, the parties said they will engage in a cooperative environmental program to promote compliance on oil and gas properties by lessees and operators on the Wind River Indian Reservation.

“This MOU is a good opportunity for all of us to start fresh, to be on the same page and to work toward the same goals,” said BIA acting Rocky Mountain regional director Darryl LaCounte.

Specifically, the MOU outlines a process and timelines for the parties to:

– review all ongoing oil and gas operations on the reservation with tribal ownership interest to identify actual or potential adverse environmental effects;

– identify prospective sources of federal funding to the tribes to support monitoring, inspection and enforcement;

– develop an environmental plan for oil and gas operations; and

– formalize a structure for future communications between the parties regarding environmental concerns arising from oil and gas operations.

“We look forward to working collaboratively with the Arapaho and Shoshone tribes, as well as with the BIA, to manage oil and gas activities on the Wind River Indian Reservation,” said BLM Wyoming state director Don Simpson.