As part of Sonic Drive-In’s strategy to develop new franchises in rural markets, the company has reached an agreement with the Wyandotte Nation, an Oklahoma-based Native American tribe, to open its first unit in Seneca, Mo.

“The Wyandotte Nation brings an appetite and acumen for operating businesses with high consumer appeal that create new jobs and stimulate business growth. They know the community desires the Sonic experience, and with our unit economics, Sonic is the perfect business opportunity,” said Cliff Hudson, chairman, CEO and president of Sonic Corp. “We also feel a personal connection because both Sonic and the Wyandotte Nation have their roots in Oklahoma. Native American tribes represent a very important part of our community here in the heartland, a significant business driver in our region and a contributor to economic activity and job creation nationwide.”

The new restaurant is slated to be built and open for business at 2314 Cherokee Ave., by the fall, adding to a portfolio of small businesses developed by the Wyandotte Nation. These businesses span multiple industries including foodservice, telecommunications, information technology, precision manufacturing and entertainment.

“We have looked at several concepts. What eventually brought us to Sonic was the opportunity to become part of a very recognizable brand,” said Kelly Carpino, CEO of the Wyandotte Tribe of Oklahoma. “The effectiveness of Sonic’s media and promotional strategy along with an amazing product line drew our attention to the franchise. The decision was solidified by Sonic’s new small building prototype that is a perfect fit for smaller, secondary markets.”

This marks the first development agreement with a Native American tribe for the Sonic system. 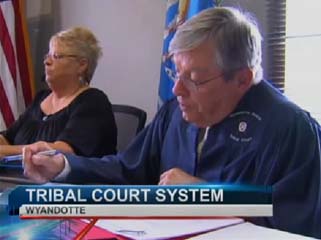