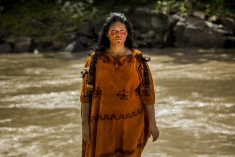 Ruth braided quick steps over the edge of the long boat and jumped off onto the beach of the Ene River. Other Asháninka women and children also got off and climbed the high riverbank. We had stopped at Saborochari village to get food for the long river journey ahead. Delicious boiled manioc and smoked fish wrapped in plantain leaves were distributed to all on the boat. We went on to Pamakiari to attend the XIV Asháninka Congress.

This was early in 2010. It was my first time on the Ene River and my first time meeting Ruth Buendía Metzoquiari. Some months before, Ruth had sent me an email asking for support, after she had learned about plans to build the Pakitzapango Dam on the Ene River in the Peruvian Amazon. I went to meet Ruth and other representatives of the Central Asháninka del Rio Ene – Asháninka Center of the Ene River – (CARE) to better understand the threats posed by the dam. It was clear at this meeting that the Asháninka felt threatened by the construction of the dam.

The health of the Ene River is crucial for the Asháninka indigenous people who depend on its fish resources, the fertile soils of its floodplains, and the many foods and other natural resources the forest provides. The dam would block the passage of sediments and the migration of fish and other aquatic organisms. Pakitzapango Dam would also negatively impact the lives of close to 10,000 people. 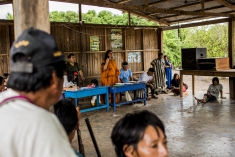 Later that year, Ruth and CARE were successful in stopping the Pakitzapango Dam through a legal action presented by CARE. The Brazilian dam builder Odebrecht then announced that it was no longer interested in building the Tambo 40 Dam, another project proposed for the Ene, Tambo and Ucayali river basin. Both of these stalled dams represent a great victory for the people who worked so hard to protect their rivers and cultures.

Yesterday International Rivers was honored to welcome Ruth Buendía to the Bay Area – on her first trip to California – as part of a special Women Water Guardians gathering. Indigenous leaders from California welcomed Ruth, me, and an intimate group of local and international water guardians with songs for the waters of this place and the healing of the waters of the world. 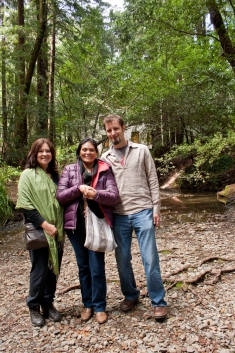 Monti, Ruth and Jason after the Women Water Guardians ceremony in Mill Valley on April 27, 2014.
Photo by Shaun Sakya/International Rivers

And today I’m overjoyed to announce that Ruth has been awarded the 2014 Goldman Environmental Prize for Central and South America for her work to protect the Ene River and stop the Pakitzapango and Tambo 40 dams. Working alongside her to protect the Asháninka people and the rivers of the Peruvian Amazon is a great honor. I’m able to continue along my path as a woman water guardian because of the strength and inspiration of women like Ruth. Felicidades hermana.