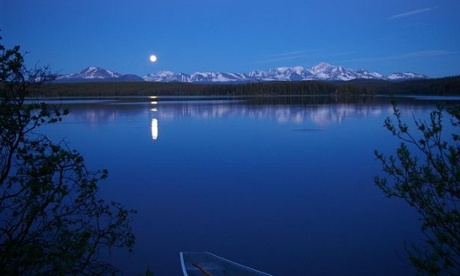 Fish Lake on Tsilhqot’in territory in British Columbia, where the Indigenous Tsilhqot’in nation has prevented a copper and gold mine from being built. Photograph: Friends of the Nemaiah Valley

By Martin Lukacs, The Guardian

The unrest is palpable. In First Nations across Canada, word is spreading of a historic court ruling recognizing Indigenous land rights. And the murmurs are turning to action: an eviction notice issued to a railway company in British Columbia; a park occupied in Vancouver; lawsuits launched against the Enbridge tar sands pipeline; a government deal reconsidered by Ontario Algonquins; and sovereignty declared by the Atikamekw in Quebec.

These First Nations have been emboldened by this summer’s Supreme Court of Canada William decision, which recognized the aboriginal title of the Tsilhqot’in nation to 1,750 sq km of their land in central British Columbia – not outright ownership, but the right to use and manage the land and to reap its economic benefits.

The ruling affects all “unceded” territory in Canada – those lands never signed away through a treaty or conquered by war. Which means that over an enormous land mass – most of British Columbia, large parts of Quebec and Atlantic Canada, and a number of other spots – a new legal landscape is emerging that offers the prospect of much more responsible land stewardship.

First Nations are starting to act accordingly, and none more so than the Tsilhqot’in. They’ve declared a tribal park over a swath of their territory. And they’ve announced their own policy on mining – a vision that leaves room for its possibility, but on much more strict environmental terms. Earlier this month they erected a totem pole to overlook a sacred area where copper and gold miner Taseko has for years been controversially attempting to establish itself; no mine will ever be built there.

And the Canadian government’s response? Far from embracing these newly recognised indigenous land rights, they are trying to accelerate their elimination. The court has definitively told Canada to accept the reality of aboriginal title: the government is doing everything in its power to deny it.

Canadians can be pardoned for believing that when the country’s highest court renders a decision, the government clicks their heels and sets themselves to implementing it. The judiciary directs, the executive branch follows: that’s how we’re taught it works. But it doesn’t always – and especially not when what’s at stake is the land at the heart of Canada’s resource extraction.

The new land rights ruling is now clashing directly with the Canadian government’s method for cementing their grip on land and resources. It’s a negotiating policy whose name – the so-called Comprehensive Land Claims – is intended to make your eyes glaze over. But its bureaucratic clothing disguises the government’s naked ambition: to grab as much of indigenous peoples’ land as possible.

This is what dispossession by negotiation looks like. The government demands that First Nations trade away – or in the original term, to “extinguish” – their rights to 95% of their traditional territory. Their return is some money and small parcels of land, but insidiously, as private property, instead of in the collective way that indigenous peoples have long held and stewarded it. And First Nations need to provide costly, exhaustive proof of their rights to their own land, for which they have amassed a stunning $700 million in debt – a debt the government doesn’t think twice about using to arm-twist.

Despite the pressure, most First Nations have not yet signed their names to these crooked deals – especially when the supreme court is simultaneously directing the government to reconcile with First Nations and share the land. But the supreme court’s confirmation that this approach is unconstitutional and illegal matters little to the government. What enables them to flout their own legal system is that Canadians remain scarcely aware of it.

Acting without public scrutiny, prime minister Stephen Harper is trying to shore up support for this policy – now 40 years old – to finally secure the elimination of indigenous land rights. The process is led by the same man, Douglas Eyford, who has been Harper’s advisor on getting tar sands pipelines and energy projects built in western Canada. That is no coincidence. The government is growing more desperate to remove the biggest obstacle that stands in the way of a corporate bonanza for dirty fossil fuels: the unceded aboriginal title of First Nations – backed now by the supreme court of Canada.

A public commenting period opened during the government’s pr blitz has created an opportunity for the indigenous rights movement and concerned Canadians to demand a long-overdue change in the government’s behaviour. Recognising aboriginal title, restoring lands to First Nations management, would be to embrace the diversity and vision we desperately need in this moment of ecological and economic crisis.

“The land is the most important thing,” Tsilhqot’in chief Roger William told me. “Our songs, our place names, our history, our stories – they come from the land that we are a part of. All of it is interrelated with who we are.”

The few days I spent in Tsilhqot’in territory five years ago made that vivid. It is a land of snow-capped mountains – Ts’il-os, who in their stories was a man transformed into giant rock after separating from his wife. Wild horses stalk the valleys. Salmon smoke on drying racks. The Tsilhqot’in carefully protect and nurture these fish – running stronger in their rivers than anywhere else in the province.

That’s why the habit of government officials, of media and even of supreme court judges to call the Tsilhqoti’in “nomadic” bothers William so much: his people have lived on these lands for thousands of years, while it is non-natives who are constantly moving and resettling. And what could be more nomadic and transient than the extractive industry itself – grabbing what resources and profits it can before abandoning one area for another.

As Canadians look more closely, they are discovering that the unceded status of vast territories across this country is not a threat, as they’ve long been told. It is a tremendous gift, protected with love by indigenous nations over generations, to be seized for the possibilities it now offers for governing the land in a radically more just and sustainable way for everyone.

In this battle between the love of the land and a drive for its destruction, those behind the extractive economy have everything to lose and indigenous peoples everything to win. The rest of us, depending on our stand, have a transformed country to gain.