TACOMA, WA (October 15, 2013) – After 13 days of costume sales at 29 Goodwill stores in Tacoma Goodwill’s 15 county region, non-scary costumes are topping the list for adults and children this year.

In a straw poll of 1,500 costume purchases from Oct 1 – 13 where cashiers asked customers their costume choice(s):

The poll reflects the imagination of Washington residents this year as the vast majority of Goodwill costumes are assembled from a non-Halloween base product that is accessorized.  (For example, a fairy would be centered around tights, a leotard, a tutu and slippers accessorized with wings, a wand and make up.  A “ghost bride” would consist of a real wedding dress with a white hat, parasol and makeup for accessories – and all for 20% of original cost).

“By culling through 8,000 truckloads of household, estate and community donations each year, we create a Halloween shopping experience similar to visiting a wardrobe department in a movie studio,” said John Nadeau, Director of Retail Sales for Tacoma Goodwill.

“Pirate coats, boots and belts are real.  And the same for pilot, soldier, fireman, doctor and nurse attire.  Now a “She Devil” can wear that fantastic red dress AND Prada,” said Nadea.

Goodwill is teaming up with local community colleges and area businesses to help high school seniors succeed. Our new, two-year program provides students a smooth transition through their senior year in high school on their way to a career in aerospace.
To “launch” the program, the Goodwill is hosting a Meet and Greet on Thursday, April 25 from 5 – 7 at the Marysville Job Training and Education Center. 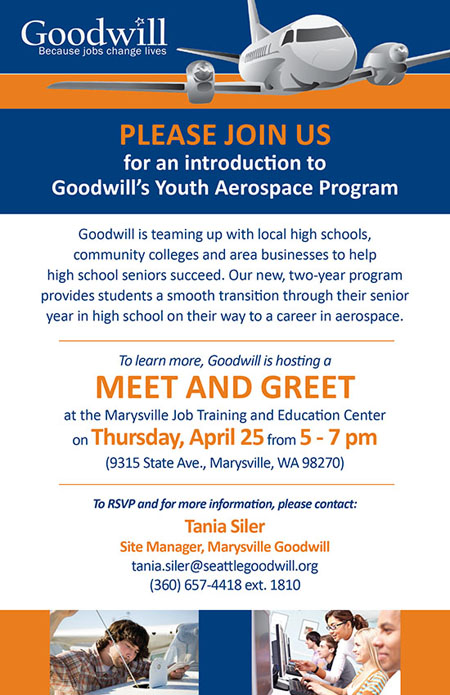 A Native American vest donated to Goodwill was passed on by sharp-eyed staff to Seattle’s Burke Museum of Natural History and Culture, where it is now in the museum’s permanent collection.

You just never know what you might find at your local Goodwill store: something old, something new — and sometimes, treasures worthy of a museum collection.

So it was with a beaded American Indian vest dropped off at the Dearborn Goodwill at South Lane Street in Seattle. Sharp-eyed staff thought it might be something special, and an independent appraiser estimated its value for Goodwill at $5,000.

Now the early 20th-century Plains Indian-style beaded vest has just been accepted by Seattle’s Burke Museum of Natural History and Culture for its permanent collection.

“It is just gorgeous and we are thrilled to have it,” said Julie Stein, director of the museum.

Goodwill donated the vest to the museum so that it could benefit the entire community, said Katherine Boury, communications manager for Seattle Goodwill.

Usually, items are sold by Goodwill through its stores, or to other users with the proceeds used to run its free job-training and education programs. The nonprofit will take just about anything, for which it will find a recycler or buyer, Boury said. But sometimes, only a museum will do.

The vest was dropped off in a trunk back in 2006, and Goodwill has been working all that time to find out what it was, and what the best disposition for the item would be, Boury said. The Burke, with its Native American collection, made sense, Boury said.

The front of the vest is delicately beaded with Italian glass beads sewn onto hide. It is lined with cotton, and has a buckle cinch decorating its black velvet back. Seams give it a perfect drape and its colors, including a rosy pink, are rare, said Justin McCarthy, Burke ethnologist. Beads accenting the shoulders have a white core covered with red glass, giving them a special glow.

The vest, probably of Flathead, Gros Ventre, Kalispell or Fort Belknap origin, is an adult man’s garment that might have been made to sell, or been reserved for use on special occasions, said Katie Bunn-Marcuse, director of the Bill Holm center at the Burke.

Think you might be sitting on something special that you would like identified? The museum’s annual artifact day is open to the public from 1 p.m. to 3:30 p.m. Feb. 9. Items of all types, from fossils to carvings, will be evaluated for free by Burke staff. Come early, the line of curious collectors often forms all the way down the sidewalk.