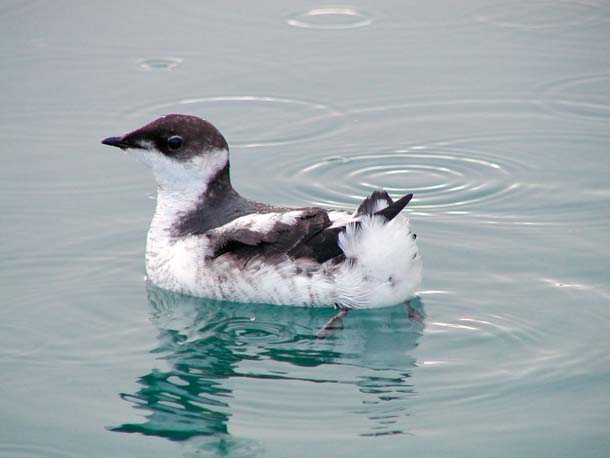 The marbled murrelet, a federally protected seabird that nests in the coastal forests of Washington, Oregon and Northern California. | credit: U.S. Fish and Wildlife Service

SEATTLE — The Washington Board of Natural Resources voted unanimously Tuesday to approve the sale of 200 acres of the Olympic Peninsula that are home to the threatened marbled murrelet. The money from the timber sale will go to the University of Washington.

200 acres might not seem like that big of a deal, but not if you ask Peter Goldman, director of the Washington Forest Law Center.

“These 200 acres are extremely important,” he said. “These lands around these timber sales are heavily used and officially mapped as occupied by the marbled murrelet.”

Goldman was referring to a rare seabird whose numbers have plummetted to the point that it’s listed as threatened under the Endangered Species Act. It nests in old-growth coastal forests of Washington, Oregon, British Columbia and California.

Goldman is working with several environmental groups, including the Sierra Club, Seattle Audubon Society, and Olympic Forest Coalition, who oppose the timber sale because it will mean clearcutting in murrelet habitat. The tracts are known as the “Goodmint” and “Rainbow Rock” timber sales, and are located on the western part of the Olympic Peninsula.

There are roughly 2,000 murrelets left in Washington and the population has been declining by up to 8 percent each year over the past decade. The birds can fly upwards of 50 miles to forage the ocean for food. For timber cutters and marbled murrelet alike, coastal forests on the Olympic Peninsula are highly desirable, and harder to come by.

Last year the University of Washington received $1.35 million from timber sales on state lands, according to the state Department of Natural Resources.

“So the question,” Goldman says, “is whether the University of Washington is really saying they want to log the last remaining habitat for the marbled murrelet for approximately $600,000.”

In an emailed statement, a spokesman for the University of Washington said: “This is the Department of Natural Resource’s decision. Some people may disagree but it is their call.”

Tom DeLuca, the director of the University of Washington’s school of Environmental and Forest Sciences, is the vice chairman of the state Board of Natural Resources, which makes decisions about timber sales. DeLuca did not vote on this particular sale and did not respond to requests for an interview.

Peter Goldmark (not Goldman) is the chairman of that board, and the commissioner of public lands for the state of Washington.

“The opponents make an emotional issue that these are the last acres available when in fact they’re not,” Commissioner Goldmark said.

These 200 acres may not be the last remaining marbled murrelet habitat but they’re part of it.

In a report released in 2008, the Department of Natural Resources identified key habitat that should be protected for marbled murrelet throughout the state. The 200 acres that are now up for sale were included in that report.

When asked about the report, Goldmark downplayed the findings.

“This is a science team report only,” he said. “It’s not proposed as a plan because, first and foremost, our major responsibility is a fiduciary interest to supply revenue for the trust beneficiaries.”

Goldmark added that the DNR has refrained from logging on thousands of acres elsewhere in the area, at a significant cost to those “trust beneficiaries” — like the University of Washington, Washington State University and public schools throughout the state, which received almost $175 millionfrom timber sales last year.

The 200 acres will be put up for sale in April. Environmental groups have indicated they will to file a lawsuit in the next 30 days.