By Chetanya Robinson, The Daily of University of Washington 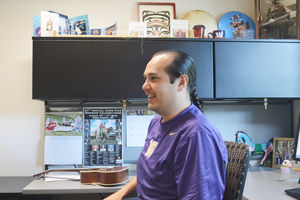 Almost a month to the day that the Intellectual House celebrated its grand opening, Ross Braine celebrated a quieter, but no less powerful victory.

On a day that coincided with the First Nations at UW’s annual powwow near Husky Stadium, Braine saw the Intellectual House being used as a gathering place. Students from Lummi Island and Crow powwow dancers met in the large meeting hall, while at the same time students cooked for Native elders in the Intellectual House’s kitchen.

The Intellectual House -— a modern, 8,400 square foot longhouse-style building — had become the gathering place the UW Native community had dreaming about for almost 40 years.

“That was an awesome day,” Braine said. “That’s what this building has already become, and what was needed for all these years.” But, he added, it was just one day out of many.

Even though it’s been open for a month, the Intellectual House still has a few finishing touches to go before it’s fully complete, Braine said.

“It seems like we could have used a little more time, because we’re still going through punch lists,” he said.

His punch list is full of needs like paint sanding, making sure the right locks are on the right doors, and ordering microphones. Despite the little challenges, the Intellectual House has been in demand for bookings. It gives priority to events with an indigenous focus, said administrative coordinator Casey Wynecoop.

The space has already been used for a variety of events. On April 16, UW Interim President Ana Mari Cauce spoke about racism and equality before an audience who packed the large hall. The space has been used by a campus alliance for minority students in STEM fields who showcased their research projects. Upcoming bookings include an event focused on indigenous food and ecological knowledge, and a camp for at-risk high school students from migrant families.

The Intellectual House will also host many graduations, said Wynecoop, including the first annual Raven’s Feast graduation appreciation for native students, held for the past 20 years at the Daybreak Star Cultural Center in Discovery Park. Now that the Intellectual House is open, Wynecoop said, it can be a focus for cultural events on campus.

The Intellectual House has provided a space that has brought the community closer together, said Andrea Fowler, of the First Nations at UW student group.

“We know it’s a privilege to have that space here at such a large university, and it’s really supported the students,” Fowler said. “So far I’ve noticed a change this spring that we’re a lot more community-oriented and together and really getting more grounded in the culture …. I think that’s going to be a great support for them, that’s something that they need to be grounded in to succeed.”

Braine said he would have benefited from a place like the Intellectual House when he was a student.

“I think if I had had a house like this when I was an undergraduate it would have been easier to find where I was,” he said.

In Braine’s office is also a framed print by Marvin Oliver, a retired professor of American Indian Studies at the UW and Adjunct Curator of Contemporary Native American Art at the Burke Museum, showing longhouses by the water near what is now Husky Stadium, a common sight before European arrival in Seattle.

From the beginning, Braine said, the planners of the Intellectual House project intended for there to be a second longhouse building next to the current one, focused on teaching and learning, which might hold classrooms or conference rooms. Half of the estimated $8 million budget for that second building will need to be raised before planning can start. However, plumbing and electricity are already installed.

Even with phase two of the project in the distant future, the completed building constructed of sturdy cedar has been inspiring people.

On April 24, the Intellectual House was host to Deconstructing Earth Day, a roundtable discussion organized by Sean Schmidt of the UW Sustainability Office. About a dozen people sat in a circle in the large, cedar-scented room to talk about sustainability and how it relates to diversity and social justice.

Pennsylvania House of Representatives member Brian Sims, the first openly gay elected state legislator in Pennsylvania and the first openly gay college football captain in the NCAA, was one of the guests who told his story. He said he struggles sometimes to find authenticity in city life, and wondered how urban Native Americans find authentic spaces in the metropolis.

In answer, Abigail Echo-Hawk, a member of Seattle Women’s Commission and a tribal liaison for UW Partnerships for Native Health, said she thought such authentic places can be created, that the Intellectual House is one of them.

“I sit in a space that’s sacred,” she said. “We’re just at the beginnings of something that can grow bigger.”