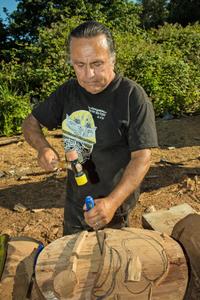 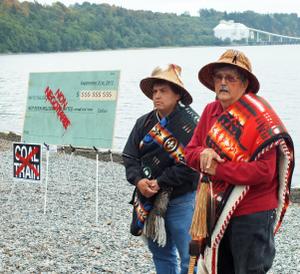 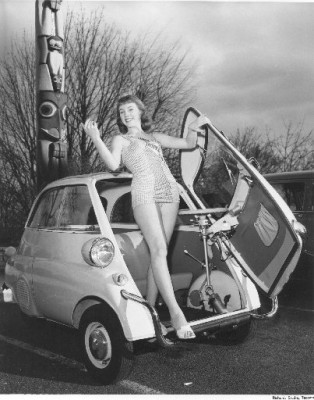 Richards Studio Collection : On March 11, 1958, Miss Tacoma Home Show of 1958, Marilyn Ganes, was photographed leaning out of the front door of a BMW Isetta 300 parked near the Tacoma Totem Pole.

TACOMA, Wash – They mulled over its decrepit condition, speculated about who carved it and discussed its historical and cultural significance – both as a potential sacred artifact and a beloved object of commercial kitsch.

But in the end, all voting members of a specially convened review panel agreed Tuesday: Tacoma’s totem pole should remain part of the city’s art collection.

“I think it’s important to keep it,” said Jack Curtright, a longtime Tacoma dealer of Native American art. “It’s been here, I grew up with it. It’s been an icon of this community.”

Tacoma’s Arts Commission took the unusual step of convening the so-called deaccession review panel to determine whether the aging totem pole, which has become a falling hazard in downtown Fireman’s Park, should be removed from Tacoma’s collected public artworks. 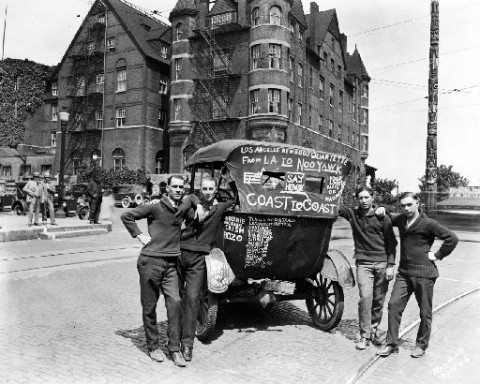 Commissioned by civic boosters in 1903, the more than 80-foot long cedar log carved in what’s purported to be Native iconography aimed to help put Tacoma on the map.

But age, rot and insect infestation have structurally weakened the pole, forcing public works officials to fence it off and temporarily brace it with steel rods. City officials are now grappling with what to do with a historic object that’s become a public safety threat.

“If it falls to the south, it will fall on a freeway ramp,” said Frank Terrill, the city’s senior plans examiner, who’s been monitoring the pole since the 1990s. “…I think we’ve reached the limits of the ability for it to stand (on its own) before it’s toppled by high winds.”

As both a designated city landmark and a public art piece, the pole falls under the dual authority of Tacoma’s Landmarks Preservation Commission and Arts Commission.

Last month, a landmarks subcommittee unofficially recommended it be taken down and publicly left to rot – once considered a customary Alaskan Native practice for poles at the end of their lifespan. The arts board then sought to separately consider the pole’s significance as a public artwork and called to convene Tuesday’s review panel.

Made up of arts and landmarks commissioners, a city planner, an art dealer, museum curators and a Native carver, the review panel held a ranging discussion about the pole’s cultural and historical importance, its artistic merit and its condition.

Then, members were tasked with deciding whether — based on a list of critieria in the city’s deaccession policy, including public safety and damage considerations – the pole should be removed from Tacoma’s arts collection.

Robin Wright, curator of Native American art for the University of Washington’s Burke Museum, noted the checkered history of the pole’s creation may never be resolved.

“The 64,000 dollar question is: Who carved it,” Wright said. “And I can’t tell just by looking at. It’s sort of been mysteriously hidden, and over time the story has changed.”

Records variably describe civic boosters hiring Alaskan or British Columbian Natives to carve the pole, partly to best a 60-foot tall totem pole erected in Seattle. As the story goes, for $3,000, the commissioned tribal members secretly carved a log donated by the St. Paul & Tacoma Lumber Company, until its public unveiling in 1903 – a day before President Theodore Roosevelt visited town.

But Native art authorities among the panel agreed the iconography appears inauthentic and the carving less than expert.

“It’s entirely possible that it was even a non-Native person” who carved Tacoma’s pole, Wright conjectured, “and they kept them secret because he was not Native.”

But while its cultural value remains dubious, panel members agreed its historical value as a city icon is undeniable.

JD Elquist, a member of the arts and landmarks commissions, said he reconsidered his previous recommendation — that the pole be removed, laid down and left to decay — as some tribes traditionally have done.  Some experts noted — and Elquist acknowledged — that decaying poles are also commonly preserved.

Curtwright added that because “it doesn’t look like it’s a sacred artifact,” it’s probably not culturally appropriate to let it decay.

Elquist said his change of heart largely came from the panel’s recognition the pole is more important as a city artifact than a Native one.

“Due to the history of what it means to the people of Tacoma,” Elquist said, “it’s important that it stay around as long as possible.”

Elquist ultimately made the motion that the pole not be “deaccessed” from the municipal art collection; all other voting members agreed.

But the panel could not come up with a clear recommendation as to what the city should do next – whether to brace the pole in place, take it down, find a place to house it indoors or erect a new pole.

City engineer Darius Thompson noted the city can store the pole in the Sea Scouts building on Dock Street “for a number of months until we figure out what we can do with it.”

For now, all such options remain on the table for the landmarks commission to consider, said Reuben McKnight, the city’s historic preservation officer. A staff report, including cost analyses for various options and a summary of the review panel’s discussion, will be presented to the landmarks board on June 12, he added.