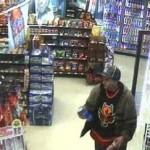 Courtesy image.
Arlington Police recently posted this security camera footage screen-cap on www.CanYouID.me, of a suspect who passed a counterfeit $50 bill at the Union 76 Gas Station at 2513 State Route 530 in Arlington on Jan. 15.

In a modern spin on the “wanted” posters of the Old West, local police departments are using a new website — www.CanYouID.me — to help identify unnamed suspects.

In the wake of the Marysville Police Department’s recent success with the program, the Arlington Police Department has posted a notice of its own on the site — at http://canyouid.me/blog/2013/03/arlington-police-department-case-no-13/apd130130 — asking web surfers if they recognized the suspect in a security camera footage screen-cap who passed a counterfeit $50 bill at the Union 76 Gas Station at 2513 State Route 530 in Arlington on Jan. 15.

The website hosts photos taken via video surveillance cameras in stores and other locations. With purported crimes ranging from credit card theft to robbery, suspects are shown on the website’s main page in the hopes that someone can help put names to their faces.

“The CanYouID.me website now provides a practical tool for law enforcement to partner with the public, to help hold criminals accountable for the crimes that impact our community,” Marysville Police Officer Dan Vinson said.

Marysville Police responded to a report of a shoplifter leaving the Marysville Kmart store with $11,338 in jewelry stolen from a locked display case. Unable to identify the suspect, detectives turned to CanYouID.me for help. Two citizens identified the suspect through the photos posted on the site, and he has since been charged, according to Marysville Police Detective Craig Bartl, who inherited the case from Vinson, who was on detective duty at the time.

CanYouID.me allows anyone who recognizes a suspect in a photo to contact the investigating agency through email with just a simple click. Anonymous tips are also welcome. Since its development by a Lake Forest Park detective in July of 2010, the website has helped identify 20 suspects, with 43 participating agencies and 148 detective signed up with the site. The city of Arlington website will link to its entries on CanYouID.me under its police department link at http://arlingtonwa.gov/index.aspx?page=86.

“The media is very helpful on big cases, but we’ve got tons of lesser crimes that aren’t going to make the evening news, and this is another outlet for that,” Arlington Police Sgt. Jonathan Ventura said. “This goes along with [Arlington Mayor Barbara Tolbert’s] focus on community outreach and embracing social media, because we can’t do this without the public’s help. It’s just a great tool.”