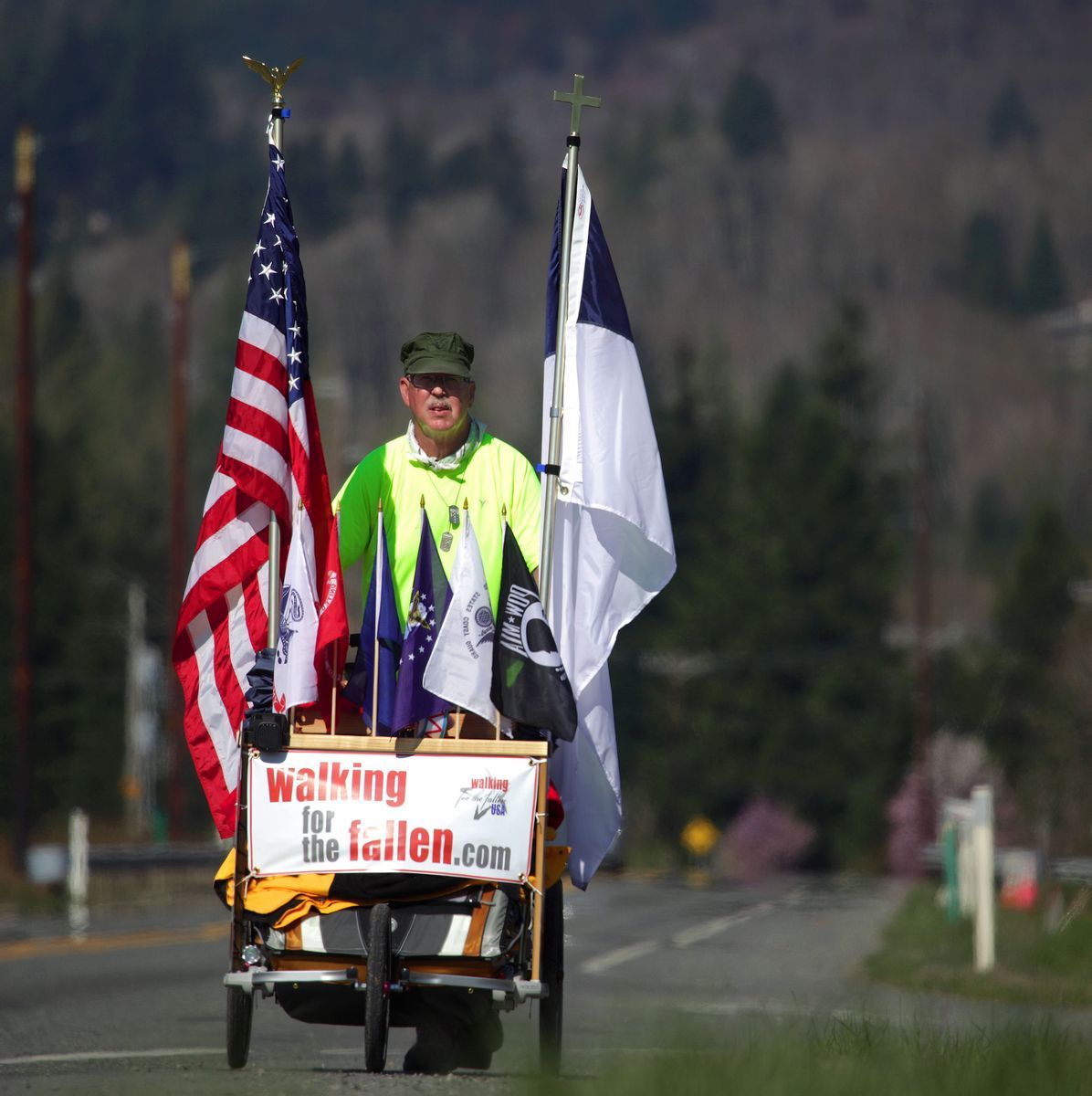 Mark Mulligan / The Herald
Chuck Lewis, a Marine Corps veteran living in Ronan, Mont., walks eastbound down U.S. 2morning toward Gold Bar on Monday, the second day of a 3,300 mile, 6-month journey across the U.S.

U.S. soldiers, sailors and Marines killed in war or those who returned with physical and mental disabilities are the focus of his cross-country campaign.

Lewis is committed to walk 3,300 miles from Everett to Washington, D.C., during the next six months to raise money and awareness for programs that help military veterans.

Lewis, 62, from Ronan, Mont., began his patriotic journey Easter morning at Legion Park in Everett where Bill Quistorf, an Army veteran who lives near the park, shook his hand. Lewis said goodbye to his wife and daughters and started walking down Marine View Drive to Hewitt Avenue headed to U.S. 2.

He won’t see his wife again until he reaches Kalispell, Mont. They’ll have another reunion in Dubuque, Iowa, and she plans to meet him in late September when he finishes at the Vietnam Memorial in the nation’s capital. Hoping to walk 25 miles a day, Lewis plans to reach Chicago, dip down to North Carolina and then up to Washington, D.C.

Lewis, a Vietnam veteran and retired electrical engineer, is pushing a flag-decorated cart loaded with a tent, a sleeping bag, clothes for any weather condition, a second pair of shoes and a solar panel to power his iPhone, which is interfaced with a SPOT global positioning system that allows his supporters to track his progress online.

He spent Sunday night at the Sultan Firehouse, where firefighters Steve Tonkin, Michelle Fox and Andrew Lowry decided to take Lewis out for supper.

Though he was prepared for chilly rain, Lewis donned a pair of athletic shorts and a T-shirt Monday morning to continue his spring walk along U.S. 2 in the Skykomish River valley.

In Startup, Lewis wondered aloud if this was the community where he would begin to see some elevation gain.

“Is this where I start going up? I see the mountains ahead,” Lewis joked. “I already have a blister, but I’ve run 100-mile races and I’m prepared.”

While taking a break, Lewis told a story about two Marine Corps veterans who returned to Ronan last year from combat duty in Afghanistan. One came home missing his legs. The other killed himself three weeks later.

“In the military, these guys have a purpose and people who have their backs. When they get home, everybody is busy, so they have nobody to talk to. The economy is poor and they can’t find a job,” Lewis said. “I probably can’t help too many of these guys personally, but I can raise awareness and money for the programs that can.”

Lewis waves to the drivers who honk their horns. Occasionally people stop him to ask about his journey.

The side of his cart is decorated with a thermometer graphic that shows how much Lewis has raised for veterans. His goal is $50,000, but he has a second thermometer ready to go should people donate more.

Lewis invites people to walk with him through their towns. If anyone asks, he is able to give a presentation about his trip. He also welcomes help with places to sleep, shower and wash clothes.

To offer such help to Lewis and donate to the cause, go to www.walkingforthefallen.com.