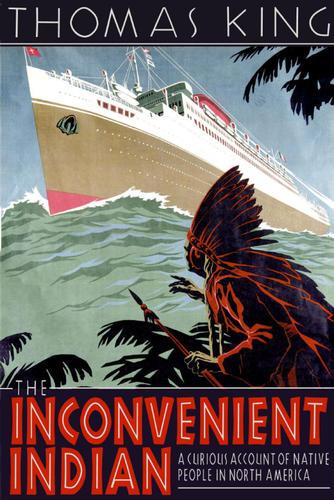 Indians are most “inconvenient” when they are … alive.

King stuffs the book with gems such as, “Christianity is the gateway drug to supply-side capitalism,” noting that the work is an expression of “a conversation I’ve been having with myself and others for most of my adult life.”

It’s not news to anyone that Natives have been duped, massacred, assimilated, deceived and often betrayed outright since the days of Christopher Columbus. But King racks up anecdotal evidence that, governmental apologies notwithstanding, the prevailing attitude is still more enamored of the dead Indian than the living.

King may be one of the few authors who can bring as many laughs as tears to the subject. But that’s what he does in this scathing history of Native-white interactions from the beginning of European settlement to today. He exposes in detail the colonial viewpoint that still persists and outlines its supposed infatuation with the “Inconvenient Indian.” It’s serious stuff, but King’s unconventional approach combining humor and biting, clever wit makes the book readable, even enjoyable.

Reviewing incidents in the centuries-long dance between Natives and non-Natives—the book is thoroughly researched but with no academic trappings such as footnotes—King surveys treaties, removals, residential schools and relocations to conclude that these were simply ways “to shuffle Indians out of the way of white settlement and economic development.”

He detours to describe Hollywood’s love affair with the Indian, noting that the love, again, only extends to the “Dead Indian”—the romantic version—rather than to the “Live Indian” or the “Legal Indian.” They are the real, all-too-inconvenient Indians.

King not only debunks the role assigned to Natives throughout history but also shows the ways that such notions persist to this day. His humor and easygoing, fireside-chat style make the dark message clear and convincing. King frequently brings in his partner Helen’s ideas, as well as his own thoughts about how or why he should present something. That makes the work casual and endearing, and we can’t help but be drawn to and empathize with the author.

King’s vista spans both the United States and Canada because the border doesn’t exist for most aboriginal people. It also reflects his bi-nationality: a Cherokee born and raised in California, now living in Canada and lecturing at the University of Guelph.

When released in Canada nearly a year ago, The Inconvenient Indian became the number one nonfiction book in the country, remaining on the best-seller list for more than 20 weeks.

King’s account is gloomy indeed, but at the end he offers a glimmer of optimism. The Alaska Native Claims Settlement Act, the Nunavut Land Claims Agreement along with the creation of the Nunavut Territory in northern Canada, and the creation of Gwaii Haanas National Park and Haida Heritage Site in western Canada are all positives, recognizing Native sovereignty. But given King’s take on the past 500 years, such treaties may be destined to remain isolated tokens unless attitudes, both Native and non-Native, change dramatically. This book can help generate the needed dialogue.

Beyond being a good writer, storyteller and academic, King is a towering intellectual with an uncanny ability to cut through the balderdash spooned out by governments, corporations and the mass media. And he does it with delightful humor and self-deprecation. The Inconvenient Indian should be required reading in every school and university in North America.