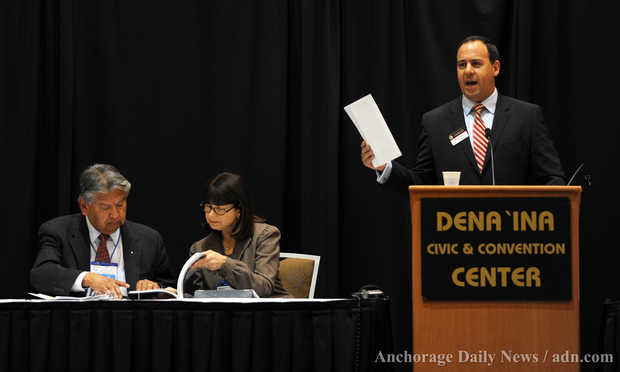 In the three weeks since the U.S. Indian Law & Order Commission chastised Alaska for opposing Natives who want their own village cops and courts, chairman Troy Eid says he’s been called a radical and an outsider who shouldn’t be sticking his nose where it doesn’t belong.

Eid swept aside such criticism Wednesday when the commission officially presented its report in Anchorage. He declared that Alaska “was on the wrong track” and that public safety and security were so bad in rural Alaska, especially for women and children, that it had become a national disgrace.

“I don’t claim to be an Alaskan,” said Eid, the former U.S. Attorney for Colorado, “but I know injustice when I see it.”

Speaking to a crowded room of mainly Alaska tribal officials and Native rights advocates at the 23rd annual Bureau of Indian Affairs Tribal Providers Conference, Eid was interrupted by applause almost every time he called on the state to acknowledge sovereignty here.

“There ought to be a recognition of tribal sovereignty as THE force that will keep people safer — and why not?” Eid said. “It’s what we do everywhere else in the United States. We recognize local people should be able to govern themselves, make their own decisions, that they should not be fighting with their states.”

A life-long Republican, Eid said it wasn’t a matter of politics, though opponents of the report have tried to portray it that way. “I would hold my conservative credentials to (Attorney General Mike Geraghty’s) or the governor’s anytime,” he said.

The nine-member Indian Law & Order Commission was established by Congress in 2010 and directed to report back to Congress and the President on its findings after holding hearings and meetings around the country, including Alaska.

The report, released Nov. 12, was mainly about the successes and failures of reservation justice programs and recommendations on new policies and laws.

But the panel singled out Alaska in a special 30-page chapter. It accused the state of falling behind the rest of the country in providing a secure environment in Bush villages.

“What’s so shocking about Alaska is that you have the most rural state in the country and you have the most centralized law enforcement in terms of how the state provides — and fails to provide — services,” Eid said. “We cling to this model because we know it and because there’s a lot of perverse pleasure taken in controlling the lives of other people … The colonial model, which is alive and well in Alaska, does not work.”

Eid and panel members Carole Goldberg of the UCLA School of Law and Ted Quasula, a former BIA police officer from Arizona, said Alaska should recognize tribal authority, not fight it.

Tribal courts exist in Alaska, but they mainly handle adoption and other family matters. The state recognizes their jurisdiction over village members, but recently challenged a decision by the Minto tribal court that stripped a convicted wife beater of his parental rights, arguing that the court exceeded its authority because the man was enrolled in another village.

Eid and Goldberg had sharp criticism for the Alaska Native Claims Settlement Act of 1971, the law that paved the way for the trans-Alaska pipeline by settling Native land claims and establishing regional and village corporations in place of reservations. While supporters of the act, like the late Sen. Ted Stevens, R-Alaska, have described it as forward-looking legislation designed to integrate Alaska Natives into the dominant economy and culture, Goldberg said it was the “last gasp of termination policy” designed to separate Natives from their traditional lands.

Laws passed since then have recognized Native American tribal authority, though often, as in the Violence Against Women Act, Alaska was written out of the legislation, they said.

“Alaska has been left behind because of the Alaska Native Claims Settlement Act,” Goldberg said.

Eid said he has heard the law described in almost reverential terms, as if it had been “set in stone” and handed down like tablets.

In fact, he said, the law has been amended 35 times since passage, and it should be changed again to bring “Indian country” — and Native sovereignty — to the thousands of acres of land owned by Alaska Natives, villages and other Native entities.

Eid said that when he arrived at his room in the Hotel Captain Cook Tuesday night, there was a six-page letter in an envelope on his pillow. It wasn’t a love note, but a hand-delivered defense of Alaska’s position by Geraghty, the state Attorney General.

Eid noted that Geraghty acknowledged that public safety was deficient in Alaska’s villages, but opinions diverged after that. Geraghty said that increasing the power of tribal courts and police, using the reservation model, would subject non-Natives to a justice system they had no power to affect democratically.

“The report does not explain how non-Native residents in these communities will participate in … tribal self-governance given that they have no right to vote on tribal laws or participate in electing tribal leaders,” Geraghty wrote. Since ANCSA’s passage, he said, “Alaskans have been free to reside in any Alaska community and expect to be governed by a uniform system of criminal laws.”

But Eid said that was no more relevant than he, as a voting resident of Colorado, being subject to Alaska criminal law while visiting here. If he broke the law, he said, he would expect Alaska courts to be fair to him even though he can’t vote here, just as he would expect tribal courts to fair with non-Natives in their villages.

Geraghty also referenced the Parnell administration’s secret plan to bring a measure of self-determination to some villages. As outlined by Gov. Sean Parnell to the Alaska Federation of Natives convention in October, the proposal would allow tribal courts to hear misdemeanors as civil, not criminal cases, with culturally attuned punishment or rehabilitation — but only if the defendant agreed.

Geraghty said in an November interview that he couldn’t provide a copy of the proposal he had given the Tanana Chiefs Conference because it was subject to negotiations.

“Has anyone seen this thing?” Eid asked the room Wednesday. No one had. He and Goldberg said the negotiations were doomed if the state didn’t treat the Interior villages as sovereign governments.