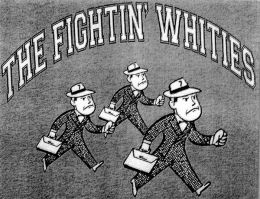 Courtesy of UNC Libraries Archival Service
The “Fightin’ Whites” printed shirts that read “The Fightin’ Whities” after an error in a Mirror article added an “i” to the team’s name.

The story we’re told is revealed by white Americans, who have a vested interest in the narrative. As such, our understanding is certainly somewhat skewed, and has indirectly resulted in the use of Native American images as team mascots.

The movement to remove Native American mascots began in the late 1970s, but very few changes have actually been made to date.

Many, including the Washington football team’s owner Dan Snyder, argue against changing the mascots because of the identity it has created for former players and community revolving around the team.

But supporters of a wide-sweeping change opine that Native Americans are marginalized by the nicknames. Many tribes are categorized together simply as “Native American,” based on social structure centered around white culture.

One intramural basketball team set out to flip the tables in 2002 when the Fightin’ Whites formed at UNC after the Coloradans Against Ethnic Stereotyping in Colorado Schools (CAESCS) tried to get Eaton High School to change its mascot.

“The message is, let’s do something that will let people see the other side of what it’s like to be a mascot,” said Little Owl of the topic to the Greeley Tribune in 2002. “I am really offended by this mascot issue, and I hope the people that support the Eaton mascot will get offended by this.”

The team quickly became a national story with various news sources across the country taking the story to the viewers, and Lynn Klyde-Silverstein, assistant professor of journalism and mass communications, found the public had three

general reactions to the team after the media coverage was split in three different directions.

The main response was that people found satire in the idea, leading to Fightin’ Whites T-shirt purchases with the proceeds going to a scholarship at UNC. The other two findings were less favorable for the group. Some saw the team name as a waste of time and a third group saw it as an expression of white pride.

“One thing I’ve noticed and in my research I’ve found this too, is that whites don’t understand their privilege, a lot of whites,” Klyde-Silverstein said. “Because what happens is there were a lot of letters to the editor that said, ‘Well, I’m white and I think it’s great that we finally have a mascot.’ They don’t understand that when you’re a minority that it’s different, it feels different.”

A wide-spread counterpoint against changing the Native American mascots is that the Notre Dame Fighting Irish nickname doesn’t spark the same controversy.

Supporters of the Native American monikers ask what the difference is between the types of nicknames. Why don’t Irish-Americans react with vitriol to the Notre Dame leprechaun mascot?

Mark Shuey, an adjunct professor of sociology at UNC, said the power structure of American society dictates an important difference between Native American and Irish mascots and offered regarding the Fightin’ Whites’ inability to gain much traction outside of the area.

“The Fightin’ Whites cannot diminish the white group collectively because (whites) still have the power,” Shuey said. “It’s the same with the Fighting Irish. Initially the Irish were excluded, relegated to the lower realms of society, like Native Americans and Negroes.

There have been two examples in Colorado that show change-based thought on the issue, but no action has occurred since the early 1990s when General William J. Palmer High School in Colorado Springs changed its mascot from a Native American to an Eagle, keeping the mascot name of Terrors because of pressure from the community. Loveland High School said it was willing to change its Indian mascot, but no change has been made in the 11 years since the school first agreed to remove its Native American mascot.

So how do changes actually happen? Various attempts have been made, even at UNC when the 2001-2002 Faculty Senate voted 11-7 with five abstentions to encourage the athletic department to avoid competition against teams using racial mascots.

When North Dakota joined the Big Sky Conference last season, The Mirror was instructed by the sports information department not to use the school’s mascot and other publications refuse to use the racially-driven mascots.

“What I teach my students is, if you’re perpetuating a stereotype, then that’s bad,” Klyde-Silverstein said. “If you’re using the word ‘Redskin’, isn’t the perpetuating it?

“People may say that’s advocacy, but isn’t it advocating for stereotypes if you’re using the term ‘Redskin?’ To use the Chief Wahoo (Cleveland Indians logo) picture, isn’t that perpetuating a stereotype? I think by not doing anything you’re still doing something.”

It’s been nearly 30 years since movements began to change the mascots, but the change remains relatively localized. Perhaps the biggest possible change would be a total change of course by Snyder in renaming his football team. The pressure on the NFL and Snyder has increased recently, but he remains resolute.

Klyde-Silverstein said she wants her students to avoid racial monikers as well.

The “Fightin’ Whites” printed shirts that read “The Fightin’ Whities” after an error in a Mirror article added an “i” to the team’s name.