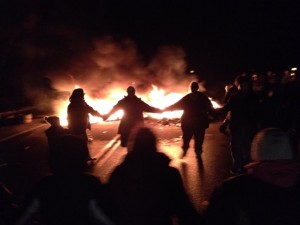 A Houston-based energy company that has faced ferocious resistance from a Mi’kmaq-led coalition is ending its shale gas exploration work for the year, says Elsipogtog War Chief John Levi.

Levi said Friday that the RCMP informed him that SWN Resources Canada is ending its exploration work, but will return in 2015.

Levi said SWN and its contractors would be picking up geophones from the side of the highway today. Geophones interact with thumper trucks to create imaging of shale gas deposits underground.

“They are just going to be picking up their gear today,” said Levi. “At least people can take a break for Christmas.”

Demonstrations against the company escalated this week. Demonstrators twice burned tires on Hwy 11 which was the area where SWN was conducting its shale gas exploration.

SWN obtained an extension to an injunction against the demonstrators Monday after arguing it needed two more weeks to finish its work. In its court filing, SWN claimed it needed about 25 km left to explore.

Levi said the Mi’kmaq community, which sits about 80 km north of Moncton, will be there again in 2015 to oppose the company. Levi said SWN will be returning to conduct exploratory drilling.

“We can’t allow any drilling, we didn’t allow them to do the testing from the beginning,” said Levi.

Levi said word that SWN is leaving is no cause for celebration just yet.