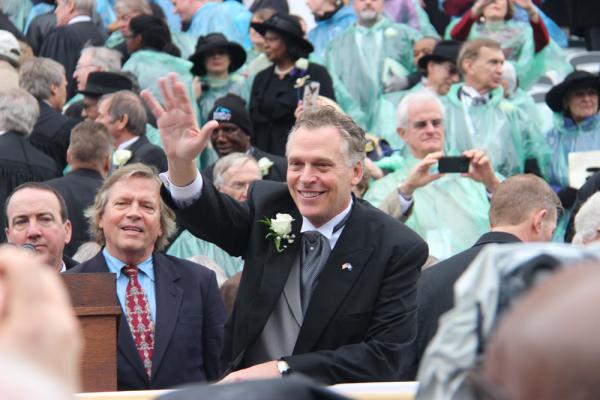 In the midst of bleachers filled with umbrellas and blue plastic ponchos handed out by volunteer’s, McAuliffe was sworn in standing alongside his family. McAuliffe, dressed in a formal grey suit complete with a white rose boutineer, called the moment, “The highest honor of my life.”

After being sworn in, McAuliffe addressed the crowd as expected by protocol and soon touched on health care and diversifying the economy.

“Like the majority of other states, we need to act on the consensus of the business community and health care industry to accept funding that will expand health care coverage, save rural hospitals, and spur job creation,” he said.

“As the legislature and my administration work to diversify our economy, we need to remember that our sense of urgency is driven by those Virginians who struggle each and every day to get by – and whose dream is simply to give their children the opportunities that they may never have had.”

He also expressed his desire that such opportunities should be open to anyone, without discrimination.

“My administration will work tirelessly to ensure that those opportunities are equal for all of Virginia’s children. No matter if you’re a girl or a boy, no matter what part of the Commonwealth you live in, no matter your race or religion and no matter whom you love.

“We must work to ensure that the children of new immigrants to Virginia have equal educational opportunities, to ensure that someone can’t lose a job simply because they are gay and to ensure that every woman has the right to make her own personal health care decisions,” McAuliffe said.

Immediately following McAuliffe’s remarks, representative tribal members from the state’s 11 Indian tribes sang and danced to a blessing song to bless the Capitol grounds, to give best wishes for a successful administration and a wish for stronger ties to the Indian tribes of the Commonwealth of Virginia. The song was led by 11 year old Chickahominy tribal member Keenan Stewart.

“We are honored to be a part of history; this goes down in the history books. This is the first time the Nottoway Indian Tribe of Virginia has been invited to be here at the Inaugural events,” said Lynette Allston, tribal chief of the Nottoway, a tribe that had received state recognition in 2010.

Chief John Lightner said it was also the first time the Patawomeck were invited to the inaugural events as a state recognized tribe and he was also happy to be there.

After the inauguration, McAuliffe shook hands with the crowd and joined staff and attendees in watching the inaugural parade.