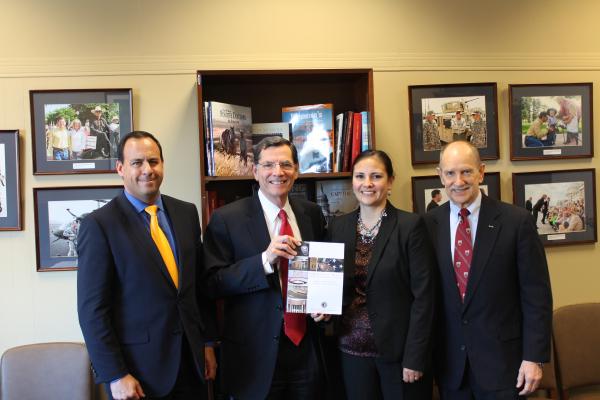 Radical, revolutionary, exceptional or just plain common sense are some of the terms used to describe “A Roadmap to Making Native America Safer,” the result of two years’ work by the nine-member Indian Law and Order Commission established by the Tribal Law and Order Act of 2010.

For more than 200 years Congress has consistently passed legislation that deeply erodes the authority of tribal justice systems. The TLOA began to reverse that trend by increasing tribal courts’ sentencing authority, and the Violence Against Women Act of 2013 again enhanced tribal judicial authority to some extent. The TLOA also called for the establishment of a commission to make recommendations as to how to improve public safety in Indian country in response to skyrocketing crime rates.

The commission presented its report in November, saying that it had “concluded that criminal jurisdiction in Indian country is an indefensible morass of complex, conflicting, and illogical commands, layered in over decades via congressional policies and court decisions and without the consent of tribal nations.” The report makes more than three-dozen recommendations about how to change things, some of them breathtaking.

The commissioners, all volunteers acting as private citizens, represented a spectrum of political views, yet easily reached consensus on some basic principles. Commissioner Tom Gede, a former California deputy attorney general and executive director of the Conference of Western Attorneys General, says, “What is really remarkable is that all the commissioners felt unanimously that the current system, which is in fact a multitude of systems in Indian country, does not serve the public safety of individual Indians and tribes very well and that tribes should be given the opportunity to engage their own justice systems and law enforcement systems free of the overarching control of other governments, subject, however, to the same constitutional constraints faced by all other governments in the United States.”

Local, that is, tribal control of law enforcement and the judiciary is the theme that runs through the report. The commission’s first recommendation is that Congress pass legislation allowing tribes simply to opt out of the current federal and/or state law enforcement and justice systems and replace them with their own systems. “There’s no certification process, no U.S. Department of Justice working group or pilot project. The [commission] emphatically rejected the approach…. We want Indian tribes to have the freedom to choose and to not have to go on their knees to Justice or BIA and say ‘Please tell us that we’re ready,'” says Commission Chairman Troy Eid, a former U.S. Attorney for the District of Colorado and currently on the faculty of two law schools.

This and all the other recommendations are based on extensive field hearings and comments from tribal members. “We struggled over these issues out in the field and in forums with sometimes 400 or 500 local people who were telling us what they thought. If there ever was a grassroots effort, this was it,” says Eid.

Commissioner Ted Quasula, Hualapai, has more than 40 years’ experience in law enforcement in Indian country. “Probably the most important part about putting the report together was getting the thoughts and the viewpoint and the position of all the tribal people that have firsthand information on what the problems are,” he says.

The one stipulation to the opt-out recommendation is that Congress establish a U.S. Court of Indian Appeals to which a defendant could appeal on the grounds that his 4th, 5th, 6th or 8th amendment rights under the U.S. Constitution had been violated. Such a court is also needed, says the report, “because it would establish a more consistent, uniform, and predictable body of case law dealing with civil rights issues and matters of Federal law interpretation arising in Indian country.”

Commissioner Jefferson Keel, lieutenant governor of the Chickasaw Nation, retired U.S. Army officer and former president of the National Congress of American Indians, says, “This and the whole process of appointing a commission to look at the conditions of law enforcement and tribal law and order in Indian country is extremely important. The tribes across the country … can take it and really make some inroads in creating a legal level playing field.”

The question of what the tribes will do with the report brings up the question of how President Barack Obama, Congress and federal agencies such as the Departments of Justice and the Interior will respond. “Our hope,” says Quasula, “is that it doesn’t sit around and collect dust,” a concern expressed over and over again by the commissioners. “With tribal leadership taking charge, there will be change to the outrageous child abuse, domestic violence, violence against women statistics. They’re just unacceptable, totally unacceptable,” he says.

Commissioner Carole Goldberg, a justice of the Hualapai Tribe’s Court of Appeals and a professor at UCLA’s School of Law, is taking the lead in crafting an implementation plan, which will be “a distillation of recommendations of the commission’s report into a set of more specific actions. For example, there may be points where we need to specify whether a specific action would best be undertaken through seeking a solicitor’s opinion in the Interior Department or modifying a regulation. If there’s to be a statutory change, where in the federal code would that statutory change be most appropriately located,” she says.

Sen. Mark Begich, D-Alaska, says, “It is important that we now move to the next stage. I’ve asked the Senate Indian Affairs Committee to hold a hearing on the report, because I think it’s important for us not just to put this on a shelf and ignore it. There are some pretty important issues we should address here.”

Those issues include the need for base funding for tribal law enforcement, justice systems and detention facilities and for better cooperation between federal, state and tribal law enforcement. The report also recommends a requirement that federal agents turn up in tribal court when they are called, not a trivial issue, says Eid.

The unique situation in Alaska gets a chapter, as does juvenile justice, which Goldberg describes as “an urgent problem that needs to be remedied.” Those recommendations follow the principle of the Indian Child Welfare Act in putting young offenders – and the dollars to provide services – in the control of the tribe rather than of the federal and state justice systems ill-equipped to deal with them.

The report’s recommendations may look like a hard sell, but, Eid says, the report “is not to tell anyone what to do, but it’s also to say, ‘Local government works best; it’s the American way.’ It’s emphatically a better way to prevent crime…. It’s clear that many Native governments, even those with not a lot of means, want to and will sacrifice in order to put sovereignty into action through enforcing their own criminal laws.”

Eid says he thinks the movement toward local tribal control of law enforcement and justice systems is unstoppable. “I’m very optimistic,” he says.