By Amy Nile, The Herald

The Snohomish School District is running two propositions. It is seeking a four-year renewal of an expiring operations levy and approval for technology improvements.

The replacement maintenance and operations levy would bring in more than $106.1 million over the next four years. It funds the difference in what the state pays and the total cost of educating students. The levy currently accounts for about 20 percent of the district’s budget for operations and educational programs.

The district also is asking voters to pay an additional 50 cents per $1,000 of assessed property value for a separate capital projects levy.

It would bring more than $14 million over four years to fund instructional technology improvements, such as replacing computers, expanding wireless and upgrading online communications.

The Monroe School District is asking voters to renew an expiring operations levy while seeking new taxes for technology upgrades.

The four-year replacement learning levy would bring in $66 million over the next four years to supplement state funding for classroom instruction. It currently accounts for about 20 percent of the district’s budget.

Monroe’s second proposal would bring in $7.5 million over six years improve technology . Homeowners would pay 31 cents per $1,000 of assessed property value for the first two years. The rate would decrease to 29 cents by the last two years of the levy.

The Sultan School District is seeking renewal of a maintenance and operations levy. It would bring in more than $18.7 million over four years.

As is typical for other districts, the levy funds make up about 20 percent of the Sultan school budget. The state funds nearly 70 percent and the federal government covers just over 10 percent of the cost of education.

Voters have until 8 p.m. Feb. 11, to return their ballots at voting centers, drop boxes or by mail. Ballots in the mail must be postmarked by Feb. 11 and require first-class postage.

People have until Monday to register to vote in person at the Snohomish County elections department, 3000 Rockefeller Avenue, Suite 505 in Everett. 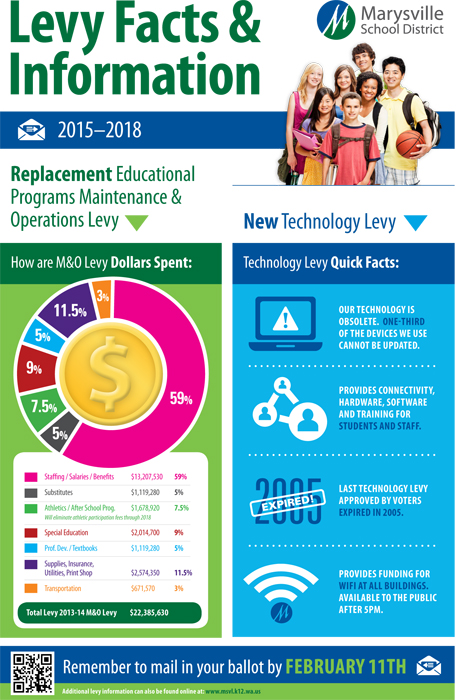