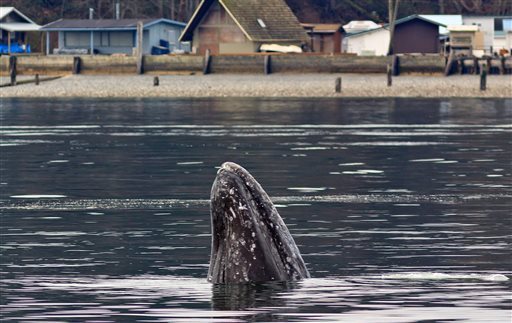 By John Dodge, The Olympian

Marine mammal researchers have learned over the years that the gray whale spring migration from their breeding grounds in Baja, Calif., is not all black and white. It’s, pardon the expression, several shades of gray.

More than 20,000 of these marine giants start out each year in the late winter and early spring on a 5,000- to 6,800-mile journey to their feeding grounds in the Bering, Beaufort and Chukchi seas. It’s one of the longest mammal migrations worldwide by creatures that reach 50 feet long and can weigh 40 tons. They don’t all make it nonstop or in its entirety for a variety of reasons.

John Calambokidis, an Evergreen State College graduate and one of the founders of Cascadia Research, a well-respected, Olympia-based marine mammal research group, has more than 25 years of experience figuring out what the gray whale migration is all about. Generally, it breaks down into four categories of whales, he explained to me.

The vast majority of the grays do make it to the three seas that ring northwestern Alaska, spending the summer months opening their filter-feeding mouths to feast on a varied diet of crustaceans, crab larvae, small fish and marine worms. These are some of the same whales that draw the oohs and aahs of whale-watchers at land and at sea all along the ocean migration route.

But there’s another genetically distinct group of grays — they’re known in scientific circles as the Pacific Coast Feeding Group. As their name suggests, they spend the spring, summer and fall spread off the outer coast from Northern California to northern British Columbia, exhibiting feeding behavior apparently learned from the maternal side of their lineage.

A third and smaller group has become known as the Puget Sound Group. This group of about a dozen, primarily male gray whales veers off from the larger migratory return like clockwork each early spring to hang out in the shrimp-rich waters of Possession Sound between Whidbey Island and Everett.

The first of the Puget Sound visitors was seen this past weekend. This old bull whale is nicknamed “Little Patch.” He’s been the first to show up for the past two years. He’ll soon be joined by others, many of them individuals that Calambokidis and his colleagues first starting seeing nearly 25 years ago.

Marine mammal scientists rely on the unique and stable pattern of mottling on each whale’s body to tell the individuals apart.

The dozen or so whales in the Puget Sound Group complete the migration. They hightail it to Alaska in late May or early June.

The Puget Sound Group provides one of the best chances of seeing gray whales in the wild. Island Adventures has been offering gray-whale-watching tours out of Everett for the past decade. They’re currently scheduled to run through May 18. The company claims a 99.5 percent success rate at seeing a gray whale. It just goes to show that Little Patch and his companions are as reliable precursors to spring as the Lenten rose, daffodils and crocuses in the flower beds at Horsefeathers Farm.

Calambokidis said Island Adventures has been helpful with gray whale research over the years, helping researchers to identify individual whales.

The fourth group of migrating grays whales is known as the stragglers. Whales that fall into this group are often sick or injured and die without completing the migration. The southern end of Puget Sound is often their final stop before they wash ashore.

I’ve grown to dread news of a gray whale in South Sound waters. Invariably, the story of gray whales in our midst has a sad ending.

A DIFFERENT KIND OF MOVE

This just in from the Capitol Land Trust: Eric Erler, executive director of the Olympia-based nonprofit, is stepping down from the post after 13 years. Erler will remain with the land trust in a new capacity, working to build financial support and new partnerships for the land conservation group.

The land trust board is accepting applications through March 24 to fill the director role. For more information about the job description and how to apply, visit the land trust website at capitollandtrust.org.