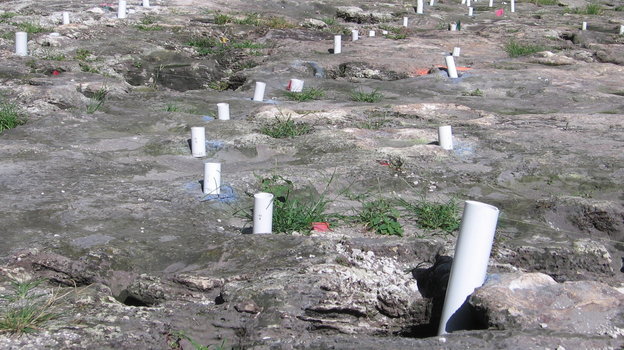 A series of postholes sit on a site that some call a major archeological find, once home to a Tequesta village. A developer wants to build on the site, but agreed to preserve the village.
Greg Allen/NPR

In downtown Miami, amidst the office buildings, shops and high-rise condos, visitors will soon be able to see a site historians are calling Miami’s birthplace.

The spot where the Miami River meets Biscayne Bay used to be home to the Tequesta tribe, which is where Spanish explorers who first arrived in Florida in the early 1500s encountered them. Today, that spot is the heart of downtown Miami.

A developer began making plans last year to build on one of the last pieces of undeveloped land there. When the company called in archaeologist Bob Carr to first conduct a survey, he found what may be the oldest prehistoric town in the eastern United States.

When the topsoil was cleared away, Carr found a series of postholes bored into the limestone bedrock. The postholes form the outline of six circular structures: buildings that once were part of a major Tequesta village.

“The Tequesta were the native people of southeastern Florida,” Carr says. “They were certainly here when the Europeans arrived. They probably encountered Ponce de León, who apparently did land somewhere near the Miami River.”

The discovery of the village was a major archaeological find, one that rivals the discovery of a related site 15 years ago on the other side of the Miami River. Development there uncovered a much larger ceremonial site dubbed the Miami Circle. Preservationists raised money to save it, but little has been done since then to improve that site or interpret it for visitors.

The developer of the new site, MDM Development Group, recently reached an agreement with historic preservationists that will preserve the village and also interpret some of the most important elements.

MDM plans to build a retail, hotel and office complex on the site but as part of the agreement, the building’s lobby has been redesigned. It will now include a museum gallery with glass walls and flooring to showcase some of the Tequesta circles for visitors.

Architect and preservationist Richard Heisenbottle says that visitors will “be able to see the circle and the archaeological dig through a glass floor. And, at that same time, there will be a video that explains the history of the site.”

A second Tequesta circle will also be visible from the sidewalk and showcased in an area planned for a restaurant in another part of the complex.

Most of the rest of the prehistoric Tequesta village will be preserved under the building and accessible to researchers and archaeologists through a crawlspace.

It’s not all preservationists hoped for, but it is pretty close. Along with the Tequesta village, the site also contains elements from its later uses, when it was a military fort and then Miami’s first resort hotel. Those layers of history will also be preserved and explained to visitors.

“It does explain very clearly to everyone as we look at this, ‘This is where Miami came from,’ ” Heisenbottle says. “Miami’s earliest days are right there.”

Along with a movie theater and restaurants, the complex will now also have a history museum and interactive displays for visitors.

“If you go through Europe and you see how they’ve been able to marry the relationships between commerce and history, that’s what is proposed here,” says Eugene Stearns, who represents the developer.

Miami is one of America’s youngest cities, just a little more than a century old. This new archaeological find is a reminder that Florida is also home to some of the oldest settlements in North America.

“This will give you the opportunity to see both sides of the story, that we’re one of the oldest human habitation sites and we’re the youngest major metropolitan area,” says historian Arva Moore Parks.