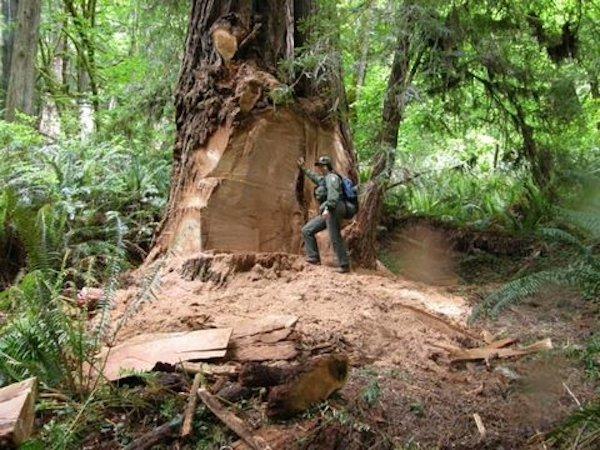 The New York Times is raising the alarm on redwood poaching.

Redwoods that have stood like sentinels for a thousand years or more are being brutalized by poachers, their burls hacked off and sold. There have been at least 18 known cases of burl poaching from redwoods in the past year, forcing the closing of one California state highway at night, with more to follow.

“It’s not just a property crime,” said Brett Silver, supervising ranger for Redwood National and State Parks in California, to The New York Times. “It’s a legacy, like hacking up a church.”

This the Yurok certainly feel, regarding redwoods as “sacred living beings” that “stand as guardians over our sacred places,” the tribe says on its website.

In March, the National Park Service announced it would close the Newton B. Drury Scenic Parkway at night to try and hamper the operations, which tend to be conducted under cover of darkness. While the poaching of wood in general is not new, a slow economy combined with an increase in methamphetamine use have made poachers bolder, the newspaper said.

“They have been targeting ever-bigger burls and using increasingly brazen tactics,” The New York Times reported. “Last year, a redwood estimated to be 400 years old was felled by thieves who wanted access to a 500-pound burl 60 feet up.”

Burls are essential to a redwood’s reproduction, the National Park Service said.

“Burl is a woody material full of un-sprouted bud tissue,” the NPS said in a leaflet about the trees. “It serves as a storage compartment for the genetic code of the parent tree. If the redwood falls or is damaged, the burl may sprout another redwood tree known as a clone.”