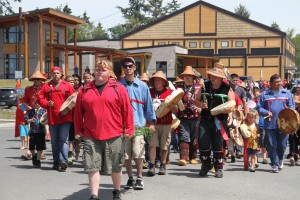 The First Salmon Ceremony is a time when Tulalips honor the first King Salmon of the year. He is a representative of his people and when the people of Tulalip treat him with the respect, he returns to the salmon village carrying the message that we are worthy of the sacrifice, the life, that a salmon gives in order to feed us. It’s an ancient tradition that ensures good harvests and keeps us tied to the species that we rely on for both physical and cultural sustenance.

“This is tied to a value,” said Tulalip Board of Director and Treasurer Glen Gobin, “the value of giving thanks for the things that nature provides for us. The way we do things today may not be the same as we did 200 years ago, because many things were taken away. But as long as it’s done with good intentions and good feelings in your heart, our ancestors look at that and are happy.”

If you’ve never been to the First Salmon Ceremony, the first thing you notice is how it feels. Like a wedding or baptism, the atmosphere is somewhere between a family reunion and sacrament. Smiles, hugs and laughter permeate the ceremony. Along with the love, there are constant, gentle reminders that this isn’t just pomp and circumstance, this is a ritual that is necessary to the survival of our people.

“It’s important that the teachings we receive are passed on in the same manner we received them. If we don’t, then our future changes,” said Gobin. “It’s the young ones that will continue to carry that on.”

After describing the meaning behind the songs used in the ceremony and emphasizing that songs are considered personal property, Gobin further explained, “I tell this story every time, so that the young ones, when they hear the song, they know what it means. They know how it came to be and they can pass that onto the next generation.”

Federal Indian policy over the years has generally aimed to eradicate Native Americans as a people. Although, not as outwardly brutal as genocide, assimilation policies and cultural disconnection are considered just as damaging to tribal citizens as outright murder of the populace.

“Through the course of time we lost much. All of our history is done in an oral manner,” said Gobin. Although much is gone, he pointed out that much has been saved as well.

Gobin thanked those gathered for the ceremony, “You are here for a reason, you are here because this is a ceremony. That returning visitor (King Salmon), he knows who is here. You know the potential of the message he’ll bring to the other side.”

As the canoe took the remains of the first salmon back to the water, releasing him facing west towards the salmon village, Tulalips raised their voices in a song that means, “Farewell Big Chief, safe journey home.”