Water that truly unlocks health, or the latest cure all snake oil? 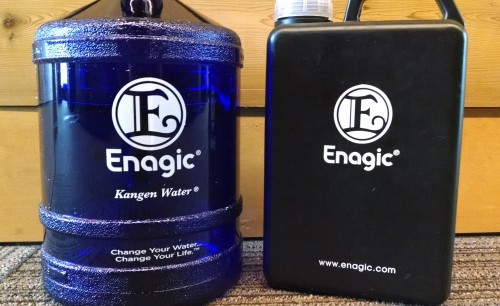 You may have seen the blue and black Enagic water jugs people are packing around these days. You’ve probably heard about Kangen water, and if you yourself are not a Kangen user, you’ve probably wondered what exactly is so special about this water from all other filtered waters. The answer to which often leaves people with many more questions about how it all works, or why Kangen is a better choice. Here you will get an in-depth look at this latest health fad.

Many Kangen users tout this water as the new miracle in naturopathic health. Easily absorbed by the body, this water is supposed to keep you hydrated, in addition to being an antioxidant.

Tulalip tribal member Caleb Woods, a Kangen user, said, “I feel more energized, and toxins flush out of my body faster. I notice I sweat easier, and my acne has been clearing up.”

The effects Woods noted are typical of any well hydrated person, so what makes Kangen different? The answer is not so simple.

What is Kangen water exactly? In a nutshell, it is basic, or alkaline. The machine that filters and produces the water is actually a medical machine developed by a Japanese manufacturer 40 years ago. According to Kangen rep, Shawn Brown, water from the city tap or well goes into the machine, is filtered, and then restructured using electrolysis; a process of running an electric current through the water. Water molecules, which are naturally polarized, cluster in a naturally hexagonal structure, similar to a honeycomb. The restructuring of water arranges the molecules into micro clusters of five to seven molecules, instead of the typical 15. That process also ionizes the water, which makes it basic by creating a negative hydroxyl molecule (HO–) and a positive hydrogen ion (H+), or cation. Micro clusters of hydroxyl molecules are more easily absorbed in the body.

The separation of ions of Kangen water raises the pH, which is a measure of the power, or concentration, of hydrogen ions in any compound. The pH scale runs 1-14, 7 being neutral. As the concentration of hydrogen ions increases, the pH number decreases. Acids have low pH, and bases have high pH. Water typically measures at 7. According to the Snohomish County Health District, city water measures at 7.5 because of the lye added to the water to prevent rusting pipes, both hazardous to health in and of themselves. Kangen water is very basic when it’s ionized, measuring between 8.5 and 11, though agitating the water will return it to a neutral state. Also, if not consumed immediately, the natural interaction between the cations (H+) and hydroxyl (OH–) molecules will return the Kangen water to natural water (H2O).

What is the need for alkaline Kangen water?

Brown said, “Cities put a lot of chemicals in the water to kill bacteria, or to make the water healthy. Essentially, that is dead water. Kangen water is not only filtered, but it has free hydrogen ions, which is a natural antioxidant.”

The hydrogen cations are regulators that catalyze chemical reactions in the body’s systems, drawing out free oxygen molecules, or oxidants. In that way, the water is alive, interacting with the body as you drink it. The abundant of cations join with oxidants, neutralizing them. But Kangen water, as a basic solution, disrupts the body’s cells from doing this naturally by inhibiting the mitochondrial processes. The mitochondria of a cell, which govern metabolism in cells and in turn the body, require oxidants in order to metabolize proteins. Hydroxyl molecules join with free radicals making hyperperoxide in the body, allowing the free cations to seek out oxygen and oxidants to join with. That essentially leads to the depletion of oxygen creating a chemical imbalance in the body and a disruption of natural processes at a cellular level. This leads to premature cell death. The body works to regulate itself, and these processes occur naturally without Kangen water.

“The body is naturally alkaline, the blood is alkaline. If the body is acidic, you’re probably sick,” said Brown.

That is true, though not entirely accurate. The ideal pH of blood is between 7.3 and 7.4. So yes, it is alkaline, but only slightly. The body’s many systems help to regulate the pH of the body, each producing acids and bases, specific to each system. While the body is naturally alkaline by design, it is regulated through the secretion of acids produced in the body. Acids, like lactic and stomach acids, are designed to breakdown sugars and proteins, while bases, various hormones, are designed to specifically regulate systems in the body, many of which produce acids. Systems in the body use water to make hydroxyl and hydrogen cations for the purpose of metabolizing compounds and cleaning the body. It is a delicate balance that can have serious health implications when altered.

While it is a delicate balance, deviation of pH levels, even slightly, are signs of serious illness in the body. To do this intentionally has many health implications. For example, deviations in body chemistry of any degree affect metabolic systems drastically. A shock of pH imbalance due to raising the alkalinity of your body could lead to alkalosis. Mild alkalosis causes muscle spasms and cramps. Severe alkalosis can lead to tetanus or cardiac arrest. Acidosis, in contrast, causes mild nausea, vomiting, convulsions, and apnea.

Why does it matter, you may wonder? First of all, Kangen water will be available at all youth summer programs, and at the summer school. Parents should be aware that this is being served to your children. For people with strict dietary needs, there are serious health risks associated with altering body chemistry. That’s not saying Kangen is bad, or shouldn’t be used, but parents should be aware of what their children are exposed to. If people, including children, are on medications, they need to know how Kangen water affects them. The Kangen website and virtual demonstration specifically warn that users should not take medications with the alkaline Kangen water, and should refrain from drinking Kangen for an additional two hours afterward.

Second, there has been a large push that this is the answer to a healthier membership. There is a community Kangen machine available to the public for an hour, mornings and afternoons, at the Don Hatch Jr. Youth Center. Some members have machines in their homes. Kangen can only be acquired through the use of these machines, not sold in stores anywhere. These machines run between $2500 and $4000, and can be acquired through a regional Kangen representative. While the benefits of Kangen may outweigh the risks, the truth is, you don’t need Kangen water to be healthy. Similar results can be achieved through choosing organic foods and eliminating processed foods as much as possible, and expanding your diet to include foods that have specific benefits for healthy function of the body’s systems.

There is no magic cure all to ailments. While you can’t drink your way to health, it is beneficial to drink filtered water. To  date, however, there is no documented medical suggestion that says basic water is healthier than natural water, in fact the opposite. Whatever water you choose to drink, the importance is to stay hydrated.