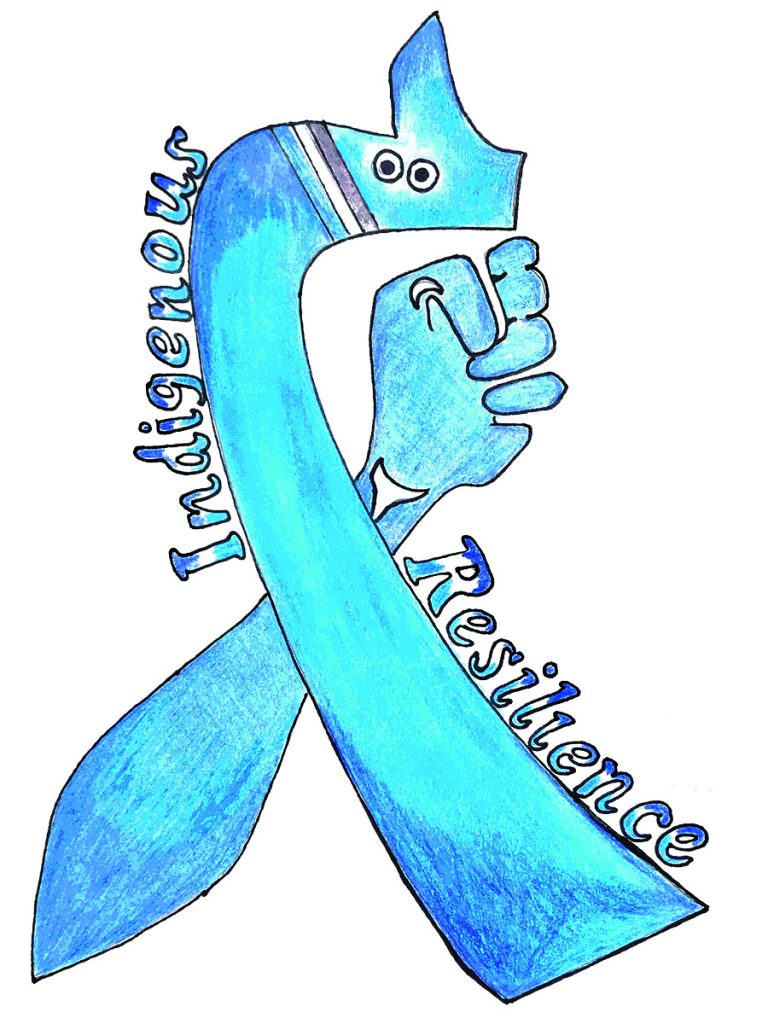 Tulalip tribal youth Jaycenta Miles-Gilford’s Indigenous Resilience design was chosen as the winner of the ‘Reclaiming Wholeness Through Recovery’ contest. The Problem Gambling Program will feature her art on t-shirts.

Tulalip Family Services held a contest during the month of January for the youth of the community. The contest encouraged kids to explore their creative minds to create a t-shirt design for the upcoming National Problem Gambling Awareness Month in March. Open to kids between the ages of twelve and eighteen, the theme for the contest was Reclaiming Wholeness Through Recovery. Family Services’ Problem Gambling Program has several special events planned next month to help bring awareness and education to the Tulalip community about gambling addiction.

The Problem Gambling Program often collaborates with the Tulalip Youth Council to brainstorm ideas for upcoming events. The t-shirt contest idea was so popular, the council spent an extended amount of time, excitedly discussing ideas and debating whether the design should be created on computer or by hand.

“We went to the Youth Council and asked for their input on awareness month and what they want to see, because we want them to know that they’re heard and that their voices mean something. We want them to know that they’re included in this process because a lot of times we hear how gambling, whether it’s them personally or a family member, this disease is impacting their lives,” states Robin Johnson, Problem Gambling Counselor.

Family Services accepted art designs through January 30th and received several submissions. On the first of February, young Tulalip tribal member Jaycenta Miles-Gilford was informed that her art was picked as the winning design. The Problem Gambling Program will feature her art on t-shirts that will be handed-out at all of the upcoming events during National Problem Gambling Awareness Month.

“It’s the ribbon of awareness,” states Robin. “And the color for National Problem Gambling Month is blue. She also incorporated the cultural aspect with the canoe and paddle. And I love the message, Indigenous Resilience, that’s exactly what it’s all about, not giving in and fighting back. The young lady who won is going to be honored at our Annual Community Dinner and will be presented with a three-hundred dollar Wal-Mart gift card.”

The program aims to provide as much education as possible about the addiction to the Tulalip Youth. Sarah Sense-Wilson, Tulalip Problem Gambling Coordinator, believes that many times the youth become gambling addicts because they find it taboo and thrilling because of the risk and reward, as well as exciting when competition is involved which is extremely popular in the sports realm.

“March is identified as National Problem Gambling Month because of March Madness and the mainstream promoting of gambling during the entire month,” Sarah explained. “It’s really a campaign to promote awareness. Three years ago, we initiated the campaign in the tribal community here in Tulalip. We really want to show people that this is a real illness, this is an addiction and that it’s something that affects tribal communities just like it affects non-tribal communities. And given the proximity of the casino and other gambling establishments, we want to let people know that there is treatment and that treatment does works. We’re available and accessible to everyone.”

Sarah explained that when the Problem Gambling Program was in early development, they chose to focus on two age groups, the elders and the youth, who are statistically more vulnerable to the disease. For the elders, she attributes the addiction to an excess amount of time due to retirement, as well as an escape from both physical and emotional pain caused by grief and loss. Studies conducted by the American Society of Addiction Medicine show that gambling causes a chemical imbalance of neurotransmitters in the brain, which seemingly appear to ‘numb’ the pain receptors, when in actuality the gamblers found a way to temporarily mute their problems and relieve their pain.

“We wanted to do community outreach, supporting these groups so they know that we’re a resource,” states Sarah. “If you want to come and learn more or see about setting up an intervention for a family member, we’re here to offer support, education, materials and anything we can do to help promote the wellness of our community. We strongly encourage people to get their families involved because statistics and data show that the more the family is involved – spouses, extended family, friends and the important people in their life – then the likeliness of that individual getting well increases dramatically.”

The upcoming National Problem Gambling Awareness Month events include the 3rd Annual National Problem Gambling Month Community Dinner on March 3rd at the Hibulb Cultural Center from 6:00 p.m. to 9:00 p.m., a community movie night on March 17th at the Boys and Girls Club beginning at 5:00 p.m. as well as the Annual Honoring Elders Luncheon at the Tulalip Senior Center on March 21st from 11:00 a.m. to 2:00 p.m.