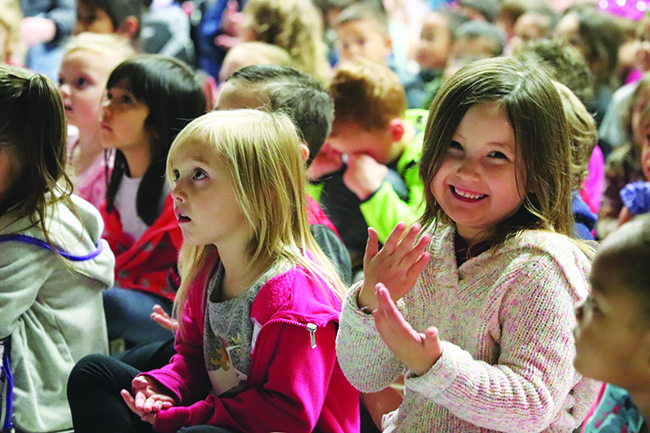 On the morning of October 12, the Betty J. Taylor Early Learning Academy (TELA) gymnasium was occupied by tiny future leaders who sat crisscross apple sauce while listening to the Killer Whale story told by a team of nine Lushootseed Language Teachers. In addition to stories, the teachers also performed a number of traditional songs, receiving plenty of crowd interaction as the youngsters knew many of the words and happily sang along in Lushootseed. This joyful gathering was just the first of many upcoming Cultural Days where the students attend an assembly in the morning and create crafts in the afternoon, all while learning about the traditional lifeways of the Tulalip people.

“The second Tuesday of every month we are having a Cultural Day during a full day of school,” explains TELA Montessori Manager, Tami Burdett. “We start with a cultural assembly and invite the families and then we do a cultural craft in the classrooms. We teamed up with the language department and it was wonderful because the kids know these songs and they proudly sing them.” 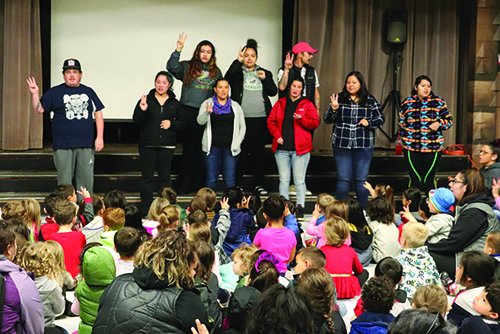 This year TELA has implemented a language immersion curriculum, partnering with the Lushootseed language department to teach the revitalized Coast Salish vocabulary to the kids. Every day the language warriors pay a visit to the classrooms, sometimes leading the class by sharing stories and songs in Lushootseed, other times simply interacting with the kids and speaking the language to them individually during playtime or lessons.

Studies have shown that kids soak up the most knowledge during early childhood development, making the expression ‘a child’s brain is like a sponge’ seemingly true. Families of other cultures have proven that kids can learn to fluently speak two languages at a young age, speaking their native tongue at home and English while at school or with friends. More importantly, TELA is proving that right now with the language immersion approach, ensuring Lushootseed lives well into the future.

Cultural Day takes the traditional teachings and the language immersion idea to a new level. Each assembly features local guest speakers who offer their stories and teachings to the students. The half hour assembly is followed by cultural crafts. Once the kids return to their classrooms, they participate in a hands-on traditional art project. 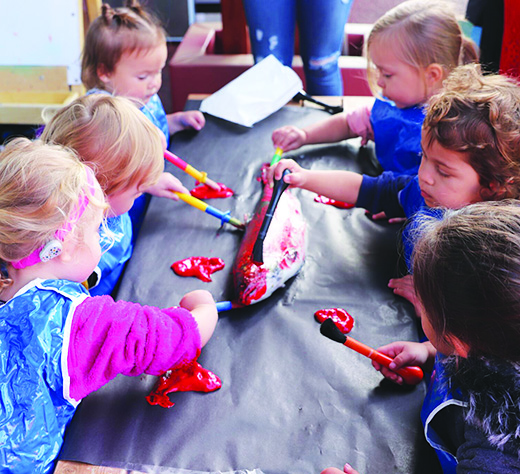 “Each of the classrooms are going to be doing a fish print today,” says Tami. “Once completed those will be going home with the kids to share with their families. It’s actually really neat, they take the salmon and paint it and then they take the fish and put in on fabric and you have a beautiful fish print. We’ve known many families that frame their kids’ fish prints and display them at home.”

Many TELA teachers use craft time as an opportunity to expand their lesson plan and teach the kids the cultural significance the craft has to Native communities. For instance, as her students covered their fish in red paint, TELA teacher Alix McKiernan asked them a few questions about salmon, like where do salmon live and if they liked to eat salmon. After the kids responded, Alix added a number of ‘did-ya-know?’ facts about the relationship between salmon and Northwest tribes and also asked the students if they’ve ever caught a salmon or went fishing with their families. 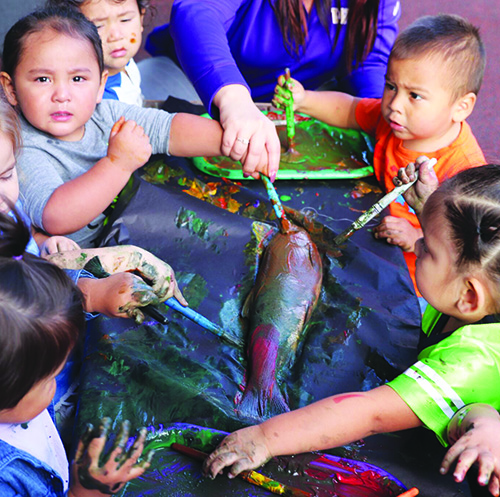 After their prints were finished, Alix’s classroom was treated to more interactive education as she cut open the salmon so the kids could get an up close look at the anatomy of the fish.

TELA’s next Cultural Day will be held on November 13, and families are welcome to join and watch Tulalip’s future generation learn their ancestral teachings to strengthen the culture for years to come.

“It warms my heart to hear the children sing and speak the language and to see them so excited to learn about our culture,” Tami expresses. “[At future Cultural Days,] the boys will be making drums with their families and the girls will be making clappers. Those will follow them until they graduate and then they get to take them home and use them to practice and perform. The kids love the songs and the language, even when we welcome them into the school every morning we hear ηαʔɬ δαδατυ ανδ ηαʔɬ σψəψαʔψαʔ in the afternoon. We love hearing the language. 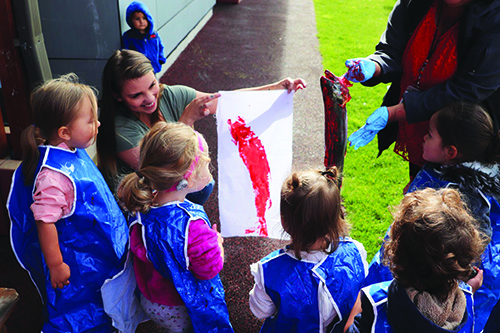 “We would like to send a big shout out to Brandon Carrillo for donating fish; Ms. Kris who coordinated with her brother-in-law, Steven Young, from fisheries, they donated nine salmon. And also, Rudy Madrigal, who bought twelve fish from our fishermen and donated them to [TELA Policy Council Chair] Mike Pablo for us.”