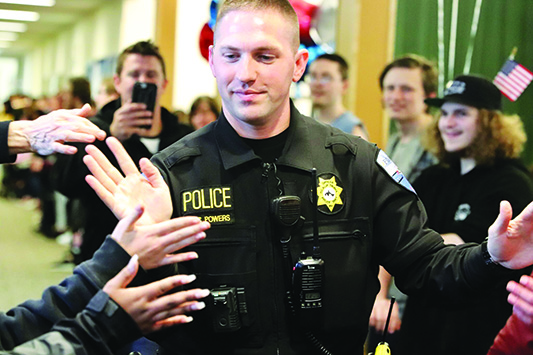 On April 19, Officer Phillip Powers walked into the Marysville Mountain View Arts and Technology High School for his last day on duty as a School Resource Officer and his last day as a Tulalip Police Officer, until he returns to the country in 2020. As a member of the United States Army, Powers was called up to serve a yearlong deployment overseas to protect our Nation’s freedom.

Officer Powers found a home within the Tulalip community upon graduating from the Police Academy and becoming a member in blue for the Tulalip Police Department. Shortly after, he was named the School Resource Officer for all of the schools in the Tulalip area including the Betty J. Taylor Early Learning Academy, Quil Ceda Tulalip Elementary, Heritage High School and Marysville Arts and Tech, where he built strong connections with the community members, instructors and students. 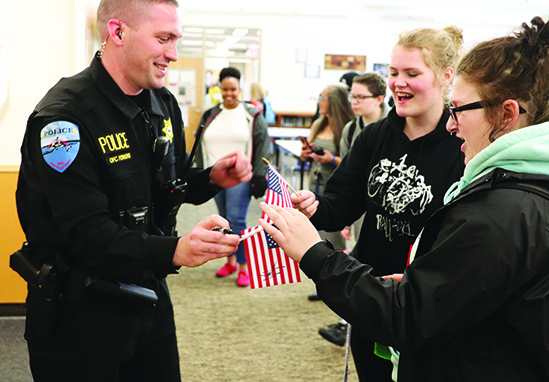 As he said his final goodbyes at each school, he was met with cheers and applause at Marysville Arts and Tech, where the students organized a surprise farewell party for the officer. A look of shock, followed by a large smile spread across his face as he made his way through the school’s cafeteria to the center stage, while the young adults honored the local hero with a well-deserved standing ovation.

The law official was presented with a goodbye card, which all of the students signed, before a number of youth, school faculty, family, friends and fellow officers shared memories as well as expressed words of gratitude for the impact he’s had within the community. During the emotional morning assembly, nearly each speaker wiped away tears before embracing Officer Powers with a hug. The teens recalled games of gatorball and conversations about movies and pop culture. And some kids simply thanked him for acknowledging them on some of their toughest days. 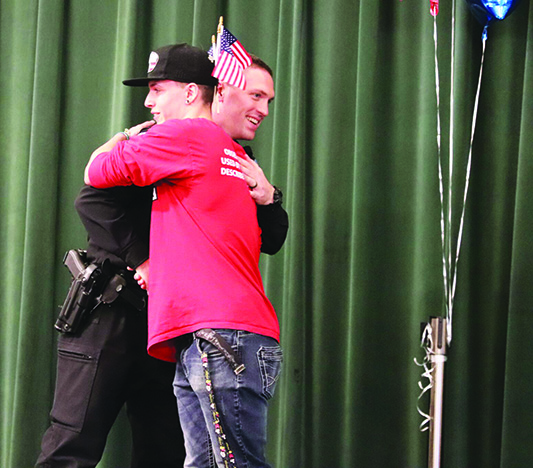 “Powers, my man I love you dude,” stated an Arts and Tech student. “I just want to thank you. I know cops get a lot of crap nowadays, but I think you changed the way that’s perceived, especially in this community. You’re fun, you know the culture, you listen to hip hop, which is lit. I think you changed the way a lot of young people think and feel about law enforcement, because we got to know you on a more personal level. I want to thank you for dedicating your life to protecting and serving our country, whether it be locally or globally. Thank you for protecting our freedom.”

The sendoff ended with students lining up on both sides of the hallway while Officer Powers walked through, giving each student a high-five.

“I feel very appreciative,” said Officer Powers. “I try to make a positive, lasting impact on the kids as much as I can just by being genuine and bringing a caring aspect. Sometimes you don’t see the effect you have on people, some of the kids won’t ever show it. To hear some of them talk about their interactions with me in a heartfelt manner, that’s different than what I normally see on a daily basis, and it was so special.” 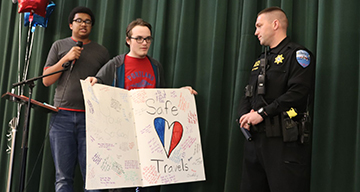