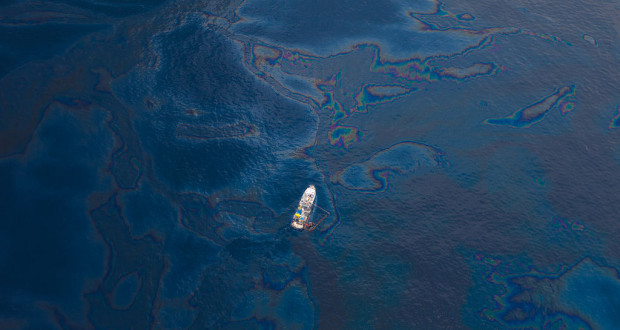 A ship floats amongst a sea of spilled oil in the Gulf of Mexico after the BP Deepwater Horizon oil spill disaster. By kris krüg via Wikimedia Commons

By JENNY STALETOVICH, The Miami Herald

MIAMI — In a lab on Virginia Key, a group of baby fish are being put through their paces on a tiny fish treadmill.

The inch-long mahi-mahi, being used as part of a study to assess damage caused by the Deepwater Horizon oil spill that spread crude across the Gulf of Mexico for 87 days in 2010, were exposed when they were embryos to oil collected during the cleanup. Now, at 25 days old, the oil is doing exactly what scientists suspected it would do: hamper the swimming of one of the ocean’s fastest fish.

And significantly so. Young mahi usually swim at a rate of five body lengths per second. For perspective, imagine a 6-foot man swimming 30 feet in a second. The fish, struggling against a current in a little tube attached to a propeller called a swim tunnel, can only muster three body lengths.

For a fish that needs speed to survive, this could mean bad news. Mahi, one of the most popular fish on menus, is already heavily fished. So losing a generation to an oil spill could take a toll. It also suggests that other fish suffered from the spill.

“Any life form is optimized compromise,” Martin Grosell, one of the study’s authors, said as a way of explaining physiology perfectly evolved to maximize speed. And if you mess with that treaty of parts, he said, “you’re going to increase its vulnerability.”

The treadmill study marks the second in recent months by the University of Miami Rosenstiel School of Marine and Atmospheric Science that has found that oil from the largest spill in U.S. history damages young pelagic fish, the large predators found in the open ocean. In March, UM researchers working with National Oceanic and Atmospheric Administration scientists determined that the BP oil also damaged the hearts of tuna embryos, a condition that likely killed them in the wild.

Both studies – disputed by BP – are worrisome because tuna, whose numbers have dropped by as much as 75 percent in the last 40 years, and mahi began their spring spawning just as the spill occurred, sending fragile embryos across warm surface waters and into a patchwork of oil slicks that covered more than six square miles.

These newest findings, published in the journal Environmental Science & Technology, build on that earlier report by looking at fish as they age.

BP says the study is invalid because, according to the company, the tests used concentrations of oil not found in the Gulf during or after the spill. Researchers also failed to look at adult fish, spokesman Jason Ryan said in a statement.

“The tests only looked at impacts to fish under one year of age,” he said. “Even if there had been an effect on a single-year class of such fish, the study does not provide any evidence to show that an effect on that group of fish would have had a population-level impact.”

After the spill, NOAA began enlisting scientists to investigate the damage it caused – so far, the studies range from the acoustic damage done to endangered sperm whales to oil in fiddler crabs. For pelagic fish, which are particularly sensitive to changes in their near-constant deep-water environment, scientists want to know how much oil it takes to affect the fish and what those effects are.

To test the mahi, researcher Ed Mager first mixed oil from the spill and seawater in a Waring blender at concentrations replicating the spill. He exposed one group of embryos to the mix for two days and then raised them in clean seawater. Another group was raised in clean water and exposed to oil when they reached about 25 days.

Mager also wanted to ensure that no other factors stressed their performance. Like all babies, the mahi startle easily. So he wrapped the treadmill – a clear, four-inch swim tunnel outfitted with a propeller and immersed in a two-foot tank – in black plastic. Mager, who studied deadly respiratory viruses in premature human babies before he switched to fish, then curtained off the area and monitored his little subjects with a video camera.

Mahi are carnivores and foragers, so they swim fast. But when he turned on the treadmill, Mager was surprised to see that the outwardly healthy fish swam much slower. The ones exposed as embryos swam 37 percent slower. Those exposed as juveniles dropped 22 percent.

Because they are so sensitive to change, pelagic fish – and particularly fragile embryos and juveniles – can act as a kind of canary in a coal mine. So the information that Mager and the team have collected for the study, one of several ongoing at the school, will be fed to modelers to determine a more expansive view of the ecosystem after the spill and help figure out the limits for how much oil it can tolerate before damage happens.

“We’ll be a little closer to knowing what to look for and how bad when, I cynically say, the next spill happens. Because it will,” Grosell said.