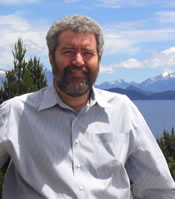 Swimming through cities is a fact of life for many salmon in the Northwest. With all their pavement and pollution, cities add to the challenges salmon face as they make their way to the ocean and back to their spawning grounds.

Alan Yeakley is the director of the School of the Environment at Portland State University and co-author of Wild Salmonids in the Urbanizing Pacific Northwest. The book sets out to answer a key question: Can wild salmon populations coexist with humans in urban areas?

EarthFix reporter Cassandra Profita sat down with Yeakley to talk about exactly why cities are such a problem for salmon and steelhead in the Northwest, and what urban-dwellers can do about it.

Cassandra Profita: Tell me what got you interested in this topic. I think of it as salmon in the city.

Alan Yeakley: When the focus has been so strongly and of course rightly so on the wild land areas, agricultural areas, forested areas, the hinterlands. That’s most of the land surface, the land area, but yet it has always been recognized that these fish have to go through these lethal urban areas. So, any fish going through the entire Willamette Basin has to go through Portland. Any fish going in the Columbia Basin has to at least go through the area between Portland and Vancouver, and with those toxics coming off the streets with the sediments coming in the higher temperatures that city environments create, it’s quite a challenge for fish to go through those areas and yet it represents such a large part of the Pacific Northwest that they have to pass through twice in their lifetime.

Profita: So, are you looking at what challenges salmonids have in urban environments?

Yeakley: Yes, they range across a whole suite of issues. And it ranges from physical impacts from sediment coming into the streams at higher rates coming off of our roads, the toxic elements that are coming in either from automobile exhaust or waste, or from fertilizer that people are applying to their yards, from industrial sites. Just all manner of – you know that toxic soup that is produced from cities that hits these streams.

Every time somebody steps on the brakes in their car – including me. Today I drove my car in so that had some impact on salmon. And we’re all doing this. We’re all having these tiny little impacts that add up. We know from copper in the brake pads that has a sub-lethal effect. In other words, it’s an effect that won’t kill the fish but it will reduce their ability to function, just having some presence of copper in the water that’s coming off those brake pads. So, these everyday practices that we do, watering our lawns too much so that the water doesn’t just soak into the lawn but goes out into the street and moves into the street, particularly if we put too many pesticides, herbicides or insecticides. The insecticides affect the insects in the stream and those insects are part of the salmon’s diet. So any extra insecticides we’re putting in our yards that go into the stream will then affect the fish. These are indirect effects, but they’re still effects.

Profita: Did you look into how salmonid populations are actually doing in urban environments? Did you look at their numbers?

Yeakley: From the city of Portland we work with Chris Prescott. He and others are doing comprehensive surveys of these salmonid populations. They do them on a routine basis every year. trying to understand population levels of salmonids. And recently Chris sent me some data about a month ago, actually, from some some encouraging results for native fish populations in Portland urban streams including salmonids that are on the uptick. So there are some encouraging results from Portland. There are also encouraging results from other cities such as Boise and Seattle and some of the other surrounding metropolitan areas in the Pacific Northwest in terms of some of the salmon numbers coming back. Of course, they’re not in any substantial numbers yet, but at least there is some presence of salmon in some of the area streams now.

Yeakley: “Yes, where municipal efforts have been most successful and most intense we’re seeing the best return. For instance in the Johnson Creek watershed, there have been a number of very large restoration sites, recovery sites that have been conducted by the city of Portland, the city of Gresham and with some help from other entities. All of these people working together have been able to recover stream segments’ entire floodplain areas, and that’s really notable so they’re to be lauded.

The big challenge, of course, is these habitats are not sufficient still to recover very large populations of salmonids. And they sometimes are not connected together well enough. So there will be a big stretch of nice habitat and then they’ll go through a concrete, very narrow concrete passage like an LA stream-type channel where you don’t have any riparian, any side channels, any overhanging vegetation. So it’s kind of like a Mario game where you have little stretches where the fish are really doing OK and suddenly it gets really tense again and the numbers are not going to not come back very strongly until we reconnect and get rid of some of these really lethal habitats that still remain in their path.

Profita: What have you found needs to change to accommodate fish in urban areas and what’s realistic?

Yeakley: The realistic question is really the challenge. Part of what needs to be done is just what municipalities like the city of Portland are already doing. It just needs to be continued. More of it. Because it’s working but it’s not sufficient for full recovery.

So that’s the first thing. We just need to continue what cities like Seattle, Portland and others are already doing. But then more needs to be done in the same area, so all the streams still in damaged conditions have lots of toxics going into them have lots of nearby homes that don’t have a lot of mitigation, a lot of bioswales or other retention ponds to intercept the pollutants as they come off these urban lawns. Those still need to be continually upgraded in terms of adding more interception of those toxic pollutants and more reduction of the toxic impacts of either the urban residents or of the commercial areas or industrial areas.

Alan Yeakley is the director of the School of the Environment at Portland State University and co-author of Wild Salmonids in the Urbanizing Pacific Northwest.