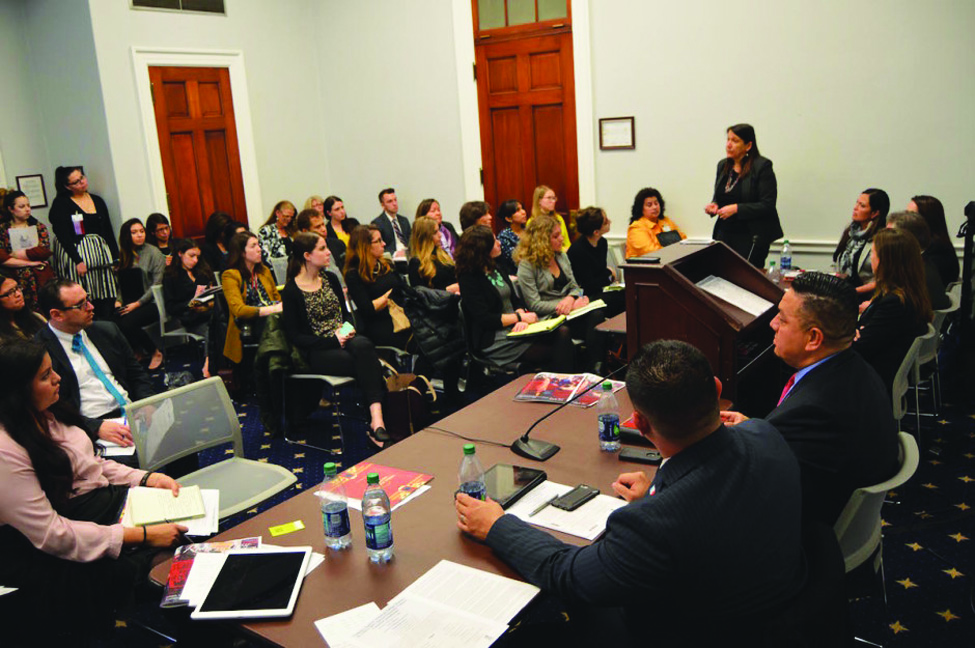 “VAWA was a major step but it was just the beginning to restoring to Indian tribes – sovereign nations – the authority to protect women,” said Congressman Xavier Becerra. “I want to thank those tribes who are implementing tribal jurisdiction over non-Indians committing domestic violence on tribal lands because we can now talk about real successes. Now we have cases of Native women who have had their rights defended.”

The 2013 Violence Against Women Act affirmed tribes’ ability to exercise special domestic violence criminal jurisdiction (SDVCJ) over non-Indian defendants within Indian country for domestic or dating violence against Native women, and violations of protection orders.  The briefing provided updates on tribal implementation of this life-saving legislation.

“Why was this provision needed?” asked Terri Henry, the moderator of the briefing and the former chairwoman of the Eastern Band of Cherokee Indians and current Co-Chair of the National Congress of American Indians Task Force on Violence Against Women. “Because the rates of violence perpetrated against Native women showed that 6 in 10 Native women will be victims of domestic violence.  And 1 of 3 Native women will be raped in their lifetime, many of which are domestic violence related.”

“But, when you look at national statistics for Native women, what is lost in translation is the complexity of the criminal justice system and understanding that these crimes are perpetrated at the local level.  In the case of Native women, these crimes are committed at the local, tribal level,” shared Ms. Henry. “Our reality is that our tribal lands have become safe havens for perpetrators.”

As of January 1, 2016, eight tribes have implemented special domestic violence criminal jurisdiction over non-Indians under VAWA 2013. Together, the tribes have made 44 SDVCJ arrests, resulting in 18 guilty pleas, 5 referrals for federal prosecution, 1 acquittal by jury, 12 dismissals, with 6 cases pending.

The Pascua Yaqui Tribe began exercising SDVCJ on February 20, 2014, as part of the DOJ Pilot Project. “We knew these offenses were occurring for many years and all we could do was drive the abuser to the edge of the reservation. We found that the non-Indian defendants had a long history of violence and were repeat offenders, some with criminal convictions and outstanding felony warrants,” said Alfred Urbina, Attorney General, Pascua Yaqui Tribe.

Since implementing SDVCJ, the tribe has made 26 SDVCJ arrests involving 20 separate offenders, resulting in 6 guilty pleas, 4 referrals for federal prosecution, 1 acquittal by jury, and 10 dismissals. Pascua Yaqui reports that since it began implementing SDVCJ, cases involving non-Indians have made up 25% of the tribe’s domestic violence caseload.

“The 16 offenders investigated in the initial year accounted for 86 contacts with just Pascua Yaqui law enforcement before and after passage of VAWA 2013 and not counting state contacts. The offenders included African American, Asian, Hispanic and Caucasian men and one woman,” said Oscar “OJ” Flores, Chief Prosecutor of the Pascua Yaqui Tribe.

The Tulalip Tribes began exercising SDVCJ on February 20, 2014, as part of the DOJ Pilot Project. As of February 1, 2016, the Tribes had 11 SDVCJ arrests involving 9 defendants, resulting in 6 guilty pleas, 1 federal guilty plea, 2 dismissals, and 2 cases pending. The defendants have had a combined number of 109 contacts with Tulalip Tribal Law Enforcement since 2008.

“Non-Indian offenders had the feeling they could do what they wanted to because there was no way they would be prosecuted. We could call county law enforcement but their response was very long or they would not come at all,” said Glen Gobin, Vice Chairman of the Tulalip Indian Tribes. “Now the tribe can prosecute non-Indian offenders but the jurisdiction is limited to certain crimes, it does not protect victims of stranger rape, and does not protect children or other family members.

In response to a question asking what members of Congress can do to help in the coming weeks, Virginia Davis of the National Congress of American Indians responded, “The most critical support needed right now is tied to resources for Indian tribes to enhance their response and implement this life-saving provision. Most significant is tribal access to the Crime Victim’s Fund which is the main source of federal funding to crime victims. These funds do not currently reach Indian country well because there is no dedicated funding stream for Indian tribes. This could be fixed in the appropriations process. Last year the Senate included money from the Crime Victim’s Fund in the CJS bill but the House did not. In the ultimate bill that was passed it was not included. We are hoping for your support over the coming months.”

“I want to thank all of you implementing the hard fought legislation won under the Violence Against Women Act. You have learned from your cases prosecuting non-Indians. We knew that VAWA needed to protect all women,” said Congresswoman Gwen Moore. “We need to expand the jurisdiction over children, sexual assault and other crimes connected to domestic violence. Tribal women certainly should have the protection of their law enforcement and know they can live safe in their community.”