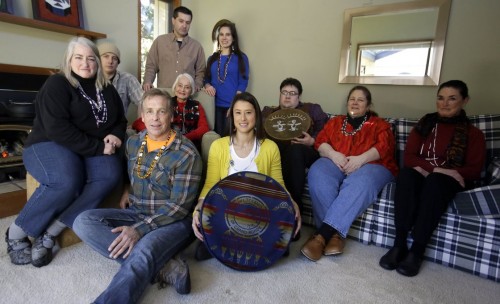 In western Oregon, members of the Confederated Tribes of Grand Ronde are engaged in a debate over what it means to belong.

The tribe’s enrollment committee is considering kicking out an entire family that traces its lineage back to the founding of the modern tribe more than a century and a half ago. The family is related to Chief Tumulth, leader of the Watlala, a tribe that controlled river traffic along a key section of the Columbia River.

“If you search for ‘Chief Tumulth,’ you’ll find that he’s, as some people claim, the most famous Chinookan chief that there ever was,” says Jade Unger, Tumulth’s great, great, great, great grandson.

After Unger heard about Chief Tumulth as a teenager he began to study the tribal language, Chinuk Wawa, and learned the traditional methods of hunting and fishing. Studying his ancestors, he began to learn about himself.

Eventually, Unger was enrolled at the Confederated Tribes of Grand Ronde. In 1855, Tumulth played an early role in the confederation’s founding by signing an important treaty with the U.S. government.

Unger says for nearly 30 years his family was embraced by the tribe, that is, until last September, when everything changed. The tribe’s enrollment committee told Unger and 78 members of his family that a recently completed audit showed they were enrolled in error.

Back in 1995, the tribe opened its Spirit Mountain Casino, and for the first time, members began to see a financial benefit. Within a few years, the tribe began to tighten its enrollment requirements. In fact, under the new standards, Unger’s family wouldn’t be let in today.

His ancestor may have signed a key treaty in the formation of the Grand Ronde, but Chief Tumulth was killed before the reservation was officially recognized in 1857. Unger says that information was well known to the committee members who approved their applications.

“There was no error,” Unger says. “It was very deliberate and it was unanimously agreed upon that we had a background and we had a right to belong here in this tribe.”

Tribal Council Chairman Reynold Leno wouldn’t discuss pending cases. But he says the audit was needed to correct inconsistencies in the tribal record.

“Tribes are made up of families and families know their own history,” Leno says. “And when you have people that don’t kind of fit into that family-type scenario, it kind of draws a question. And I think that’s what a lot of people wanted looked into.”

While he says any disenrollments that result from the audit are unfortunate, he says the tribe has a constitution — and it’s his job to uphold it.

“It was given to us by the Supreme Court to set standards and regulations for our enrollment, and I think people should respect that,” Leno says.

But both in and outside of Oregon, disenrollments are raising questions. David Wilkins, a professor of American Indian Studies at the University of Minnesota and a member of the Lumbee Nation, estimates that as many as 8,000 U.S. citizens have been cast out of native tribes over the last two decades. And Wilkins worries tribal disenrollments could be putting tribal autonomy in jeopardy.

Grand Ronde is still reviewing the results of the audit, which means more disenrollment letters could go out.

Unger acknowledges he might lose his federally recognized status, but he says nobody can take away his identity as a native person.

“That’s, hands down, way more important to me than any little chunk of money I might get in a per capita payment,” Unger says. “I don’t care about that. I care about my tribe. I feel like I belong. We belong.”

And Unger says that’s the one thing he wants to hold on to.

Four members of the Nooksack Indian Tribe have filed a lawsuit in tribal court hoping to overturn a tribal council action stripping them and 302 other people of tribal membership.

The Nooksacks, headquartered in Deming, operate two Whatcom County casinos and have about 2,000 members, according to information on the tribal website. If the council’s Feb. 12, 2013, action stands, the tribe would lose about 15 percent of its membership, including two members of the current eight-member tribal council. Those who are stricken from tribal membership rolls would lose access to tribal housing and health care benefits, as well as tribal fishing rights.

Tribal Chairman Bob Kelly has not responded to a request for comment.

The lawsuit asks the tribal court to issue an immediate stay to block the disenrollment of tribal members, pending full court review of the issues. The four plaintiffs are Sonia Lomeli, Terry St. Germain, Norma Aldredge and Raeanna Rabang.

In a press release from Moreno Peralta, one of the 306 who is acting as spokesman, Peralta said the disenrollment that he and others face is “simply a matter of tribal family politics and vengeance” being carried out by Kelly and his supporters

.Among those facing loss of tribal membership is former tribal chairman Narz Cunanan. Kelly unseated Cunanan in a 2010 tribal election.

The move to disenroll 306 people affects primarily the members of the Rabang, Rapada, and Narte-Gladstone families. Peralta charged that the disenrollment was motivated by the fact that the families are also part Filipino.”It is racism and cultural genocide that we are facing,” Peralta said in the press release.

But another Nooksack member, Bernita Madera, scoffed at the idea that the move to disenroll is based on anti-Filipino sentiment.

Madera said she and many other Nooksacks have Filipino ancestors, but they also have solid credentials qualifying them for membership in the Nooksack tribe. Those now facing disenrollment do not, she contended.

“We can show our Nooksack lineage,” Madera said. “We have our family tree. They don’t.”

Madera, who is not a member of the tribal council, said Kelly and other council members have been advised by a tribal attorney not to comment to media.

Kelly’s action against the 306 has widespread support among other tribal members, Madera said.

The dispute over the tribal identity of the 306 people is a new eruption of a dispute that has been smoldering since at least the year 2000. At that time, several members of the Rabang family were facing federal prosecution for drug-smuggling offenses. Other tribal members contended that the Rabang family and its allies had infiltrated the tribe by exploiting a lax enrollment process, taking over tribal government and using it as a front for illegal activity. But nothing came of those accusations.

The tribal court lawsuit, provided by the plaintiffs, delves into the complex legal issue of who is entitled to membership in the tribe. According to the lawsuit, the tribal constitution specifies that anyone with one-fourth Indian blood and any degree of Nooksack tribal ancestry is eligible for membership.

The lawsuit contends that tribal council members relied on an unconstitutional tribal ordinance stating that enrollment is open only to those who are descendants of people who got part of an original allotment of Indian land, or descendants of those who were on a tribal census from 1942.

The lawsuit states that the tribal council passed a resolution declaring the enrollments of the 306 to be “erroneous,” because those enrollments were based on descent from Annie James George and Andrew James, who were not on the census and not among the original recipients of tribal land allotments.

This too is a long-running dispute. As far back as 1996, tribal officials were consulting with an attorney about possible disenrollment of the descendants of Annie George, according to a letter from the attorney to the tribe. The Bellingham Herald recently obtained a copy of that letter.

The tribal council approved the resolution to disenroll those whose membership was based solely on descent from George and James after a seven-hour closed session held Feb. 12 without the participation of council members Rudy St. Germain and Michelle Roberts, according to plaintiffs. St. Germain and Roberts are among the 306 faced with loss of tribal status.

Two days later, the council began sending “notice of intent to disenroll” letters to those affected.

On March 6, tribal chairman Kelly sent letters to all tribal members providing his view of the matter. Kelly’s letter, provided by plaintiffs, says the 306 affected tribal members will have 30 days to appeal to tribal council and provide evidence of their eligibility for membership.

“Those who do not respond will be automatically disenrolled,”

Kelly’s letter states. “They will no longer be qualified for tribal housing, medical facilities, treaty-protected fishing or hunting rights, or any other rights reserved to Nooksack tribal members.”Kelly’s letter also states, “Obviously, we do not take this duty lightly, nor do we assume the responsibility with any sense of joy. Many of the more than 300 people who will be affected by this action are individuals you may know. You might attend meetings or socialize with them. Your children might go to school with them.”

Madera said she and other tribe members have already organized a recall petition against St. Germain and Roberts, paying the $500 petition filing fee in both cases and gathering the required minimum of 126 signatures.

As she understands it, the petition now empowers the tribal council to remove the two from the council if they choose to do so.