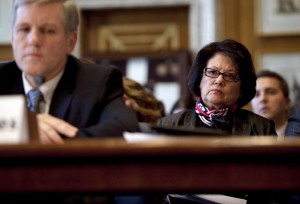 HELENA – The Flathead Reservation is among 21 Indian reservations that will be the focus of the next phase of a $1.9 billion program to buy fractionated land parcels owned by multiple individuals and turn them over to tribal governments, Interior Department officials said Thursday.

Government officials will work with tribal leaders to plan, map, conduct mineral evaluations, make appraisals and acquire land on the reservations from Washington state to Oklahoma in this phase, which is expected to last through 2015.

Other reservations could be added to the list, but the 21 named Thursday meet the criteria, particularly tribal readiness, said Assistant Secretary for Indian Affairs Kevin Washburn.

“We knew it wouldn’t be successful unless tribal leaders were interested in the program,” Washburn said.

The land buyback program is part of a $3.4 billion settlement of a class-action lawsuit filed by Elouise Cobell of Browning, who died in 2011. The lawsuit claimed Interior Department officials mismanaged trust money held by the government for hundreds of thousands of Indian landowners.

The 1887 Dawes Act split tribal lands into individual allotments that were inherited by multiple heirs with each passing generation, resulting in some parcels across the nation being owned by dozens, hundreds or even thousands of individual Indians.

Often, that land sits without being developed or leased because approval is required from all the owners.

The land buyback program aims to consolidate as many parcels as possible by spending $1.9 billion by a 2022 deadline to purchase land from willing owners, then turn over that purchased land to the tribes to do as they see fit.

So far, the program has spent $61.2 million and restored 175,000 acres, said Interior Deputy Secretary Mike Connor. To buy even that much land, officials had to locate and contact owners in all 50 states and several countries to find out if they were willing to sell, Connor said.

The work primarily has been focused on South Dakota’s Pine Ridge Reservation until now.

Last month, tribal leaders from four reservations criticized the buyback program’s slow pace and complained they were being shut out of decisions over what land to buy. The leaders from tribes in Montana, Oklahoma, Oregon and Washington state spoke before a U.S. House panel.

Rep. Steve Daines, R-Montana, who called for the congressional hearing, said he welcomed Thursday’s announcement by the Interior Department.

“However, I am concerned their efforts here may not provide tribes with the necessary tools to ensure the Land Buy-Back program is properly implemented,” Daines said in a statement.

He said the Interior Department should use its authority to give tribes more flexibility, and it should move swiftly to address consolidation problems on other reservations not included in the announcement.

Washburn said Thursday that his agency has entered into or is negotiating cooperative agreements with many tribes in the buyback program, though others say they want the federal government to run the program.

21 reservations next up in consolidation program

These are the American Indian reservations the Department of Interior plans to focus on in the next phase of a $1.9 billion buyback program of fractionated land parcels to turn over to tribal governments. The program is part of a $3.4 billion settlement over mismanaged money held in trust by the U.S. government for individual Indian landowners.

– Confederated Salish and Kootenai Tribes of the Flathead Reservation, Montana.