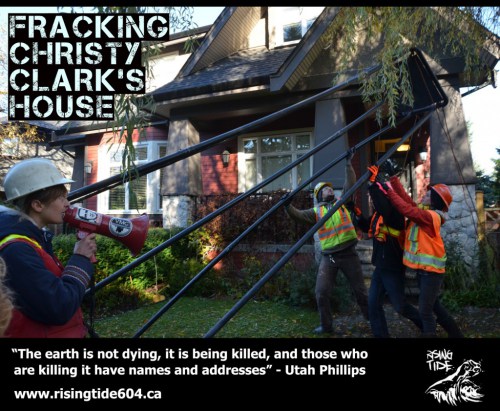 On Sunday morning, activists with Rising Tide-Vancouver Coast Salish Territories set up a 15-foot mock fracking rig on Premier Christy Clark’s lawn and announcing that “Because the Premier loves fracking, we figured we would save her the hassle of trying to take over other peoples’ homes and bring it right to her!” says Jacquelyn Fraser, an activist with the group.

“We are just so worried about all the water that is being used and polluted in northeastern B.C. for fracking. We are sure Premier Clark is too and we’re sure she can share some of her own supply so that she can see the boom in the industry she keeps promoting,” says Fraser as ‘construction workers’ set up the rig behind her. “She may not end up with a lot of fresh water at the end, but at least she has some we could use right now.”

The group is referring to the impacts on the environment caused by hydraulic fracturing, a process through which water, sand, and chemicals are injected into the ground to fracture rock and release unconventional natural gas.

“With Christy Clark touring North America to promote Liquiefied Natural Gas, fracking and gas extractionis set to take over the province,” says Maryam Adrangi, Climate and Energy Campaigner with the Council of Canadians.

Both Rising Tide and Council of Canadians toured up to northern B.C. to speak with communities impacted by fracking and fracking pipelines, such as the Pacific Trails Pipeline. Numerous families said that shortly after fracking began in the region, they were no longer able to drink their tap water and the water burned their children’s skin.

“There are over 23,419 operating fracking wells in the region and another 4,000 which are abandoned. We shouldn’t make communities up north face all the burden,” said Adrangi jokingly. “In all seriousness, no one should have to face the impacts of fracking which include having all of their freshwater being used by industry and for coporate profit, and then having unidentified, toxic chemicals put back into the water cycle.”

The group also noted the serious climate impacts of fracking, as more studies indicate that fracked gas can produce as much emissions as coal.

Christy Clark has been strongly encouraging the province’s future in the fossil fuel industry, with a meeting with Alberta Premier Alison Redford on Tuesday to discuss the infamous Northern Gateway Pipeline proposal as she just returned from a North American tour to promote Liquefied Natural Gas (LNG).