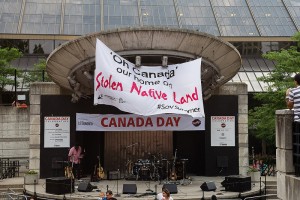 Activists with No More Silence and Idle No More unveil surprise banner at Canada Day celebration in Toronto, call attention to Missing and Murdered Indigenous Women

At this evening’s Canada celebration at Mel Lastman Square, a group of activists as part of Idle No More’s Sovereignty Summer campaign, scaled the main stage at Toronto’s official Canada Celebration and ‘dropped’ a banner reading, “Oh Canada, your home on Stolen Native Land.”

Also, members and supporters of the group No More Silence were on hand at Mel Lastman’s Square handing out educational flyer’s about Idle No More and also No More Silence’s campaign to call attention to the tragedy of Missing and Murdered Indigenous Women. Silvia McAdams, a spokesperson for Idle No More says, “there is a deep interconnection between the ongoing extractive industries based economy of Canada and the violence that industry represents against our most sacred mother earth and this country’s ongoing failures to address and resolve the murdered and missing First Nations  women’s  and girls’ crisis. Sovereignty Summer calls for an immediate national Inquiry led by grassroots Indigenous women to develop a national action plan.”

Also on hand were activists dressed up as a promotional team from RBC, handing out flyers for a fictional “Colonialism Dividend” for Canada Day. “The point of this is to call attention to the source of Canadian wealth: Native land and resources,” says Audrey Huntely of No More Silence. “While the stereotype of the drunken lazy Indian living on hand outs persists it is in fact Native land and resources that make up the riches of this country – projects like the tar sands financed by banks such as RBC generate huge profits for a few while destroying the land and communities in their path. Hand in hand with this destruction go skyrocketing rates of violence against women. In fact Native women are five to seven times more likely to be murdered than other women,” Huntley says.

Sovereignty Summer is the new campaign of the Idle No More movement and the Defenders of the Land Network, intended as an education and action-based campaign focused on Indigenous Rights and in defense of Mother Earth. Building on the momentum and enthusiasm of the Idle No More Winter and Spring towards a strategic and effective next stage of this movement.