TAHOLAH, WA (4/15/14)– The Quinault Indian Nation (QIN) Business Committee passed regulations Monday night to reopen Lake Quinault to non-tribal use, but only under specified regulations and restrictions, according to Fawn Sharp, QIN President.

The lake, which belongs to the Quinault Nation, was closed to non-tribal use on June 6, 2013 to safeguard it from pollution, invasive species and other issues of concern. Since that time, numerous nearby non-tribal residents, property owners and business owners in the area have spoken out in support of the Tribe’s actions, saying they appreciate the work being done by Quinault to protect the lake for future generations.

“That has always been our intent,” said Sharp. “Safeguarding our sacred lake for our children and for all the life it sustains is one of our highest priorities. If we can achieve those objectives, and share this precious resource with our non-tribal members, that’s what we will do. We believe it is time to try.”

The Quinault Business Committee passed the Lake Quinault 2014 Fishing, Boating and Use Regulation 2014-01, which allows uses of and on Lake Quinault for a one year time span.

Capable of throwing its seed as far as 20 feet with a single pop, Scotch broom is a tough invader. 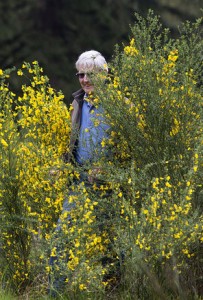 Steve Ringman / The Seattle Times
Barry Bidwell walks through a patch of Scotch broom, which can grow between 6 and 12 feet tall, at the Glacial Heritage Preserve. Bidwell has battled broom for two decades.

Scotch broom, also called Scot’s broom, blossoms in full color at Thurston County’s Glacial Heritage Preserve. A member of the legume family, its seeds are produced in pods. The pods dry in the summer sun and open with a pop, shooting seeds as far as 20 feet.

Who would think this soft landscape, with its undulating blue waves of wildflowers, flitting butterflies and calls of meadowlark, could be the scene of such battle.

But war it was, to win back, acre by acre, more than 700 acres of native prairie at Thurston County’s Glacial Heritage Preserve south of Olympia, from an invasion of Scotch broom.

The sunny flowers of Scotch broom are just now coming into full bloom, painting roadsides, highway ramps, clear cuts and any other open ground yellow all over Puget Sound country and beyond. But its pretty face conceals a commando’s swagger.

Since it was brought here, probably as an ornamental during white settlement in the 1860s, Cytisus scoparius has turned into one piggy guest. A native of western Europe, Scotch broom, also called Scot’s broom, has so worn out its welcome it’s classified as a noxious weed and been quarantined by the state Department of Agriculture. That means it is not to be sold, and is discouraged from planting by anyone for any purpose. Yet it continues to devour more acres of native habitat every year.

A member of the legume family, its seeds are produced in pods, which, as they dry in the summer sun, literally go ballistic, splitting and twisting open with a pop, ejecting seeds as far as 20 feet.

As if that wasn’t enough, the plant can even enlist an army of soldiers to help it conquer ever more ground. Ants eagerly pick up its seeds, dispersing them far and wide as they take the seeds back to the nest to feed fatty deposits on the seed surface to their young. The ants then deposit the seeds in their waste pile — where the seeds vigorously sprout in a compost of ant poo.

Left alone, Scotch broom can grow in stands so dense it alters the very chemistry of the soil in which it grows, as it sets nitrogen in nodules on its roots, making the ground less suitable for the native plants it replaces.

That same ability to fix nitrogen in the soil also enables Scotch broom to thrive just about anywhere, even in the nutrient-poor soils of native grasslands and prairies, where it quickly grows 6 to 12 feet tall.

Its green stems enable it to photosynthesize even in winter, when rains stoke its lush growth, notes Sarah Reichard, director of the University of Washington Botanic Gardens. She and one of her students, Dean Dougherty, published an article in 2004 that noted a single plant could be covered with more than 800 seed pods, producing more than 9,650 viable seeds per year that can last decades — 50 years is not unheard of. And every time soil is disturbed where Scotch broom grows — say to pull it — more seed is churned up, to sprout a new generation. 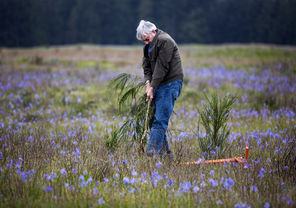 Steve Ringman / The Seattle Times
Barry Bidwell, of Graham, pulls up Scotch broom after first loosening it with a Weed Wrench, a tool developed specifically for removing the noxious weed. Thanks to volunteers like Bidwell, where Scotch broom once reigned blue camas flowers now bloom in the Glacial Heritage Preserve.

But persistence has its rewards. At the Glacial Heritage reserve, volunteers cut, pulled, poisoned and burned back broom. They have sawed it down and attacked it with WeedWackers fitted with metal blades. Mowed it with brush hogs, pulled it out with chains tied on the bumper of their cars and poisoned it with herbicide.

Scotch broom may be the only weed with a tool created just for it: a Weed Wrench. A demolition demon standing chest high, it’s used to clamp onto the trunk of the most mammoth specimen of Scotch broom, and lever it out of the ground with a satisfying crunch.

When volunteer Michelle Blanchard, of Olympia, first started clearing Scotch broom at the reserve, it grew so tall that as she rode her horse into its thickets, she disappeared from view.

“It’s raining out, and it’s cold, and snowing, and we are looking around thinking, ‘This is crazy, there is still another 1,000 acres of Scotch broom,’ ” she said of the early days of the battle of the broom.

Two things helped turn the tide: fire, deployed repeatedly in controlled burns, and judicious doses of herbicide. Followed with diligent hand pulling, volunteers working first with The Nature Conservancy, and then the Center for Natural Lands Management, which stewards the property today, started making headway. With continued work ever since, the results today are dramatic.

As Blanchard walked the prairie this week, a meadowlark called across the open, rolling terrain. Checkerspot, a rare native butterfly, sipped nectar from blue pools of camas flowers. Golden paintbrush, one of the rarest native plants in Washington, glowed as if lit from within.

To Barry Bidwell, a volunteer slugging it out with broom at this site for nearly 20 years, seeing the native plants here swell into full bloom this week was a pleasure dearly felt. A former Boeing engineer, with the license plate ECOVOL (short for ecology volunteer), he first started working at the prairie to give shape and purpose to his retirement.

Over the years, Bidwell said, he has come to believe restoration work is good for more than just the land.

“It gives people the insight that something can actually be made better.”