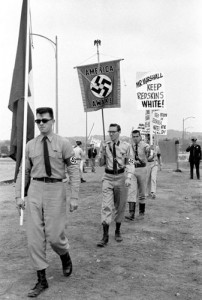 Members of the America Nazi party demonstrate against desegregating the Washington Redskins football team in 1961.

Offended that the professional football team headquartered in our nation’s capital still uses a racial slur as its team mascot?

Then you may not be surprised with what was going on with Washington’s NFL franchise in 1961, as Indian Country Today Media Network reported while pointing out a photograph resurrected by Mother Jones magazine.

Back then, the football team owned by the late George Preston Marshall was the last all-white squad in the NFL, and American Nazis marched to encourage him to keep it that way.

One of the signs they held says, “Mr. Marshall, Keep Redskins White!”

When it comes to offensive statements, that would seem the equivalent of piling on. It is relevant today, as ICTMN noted, because current owner Dan Snyder is battling to keep Redskins as the team nickname. (Mother Jones, by the way, refuses to, and redacts the nickname in its stories.)

Both sites refer to Thomas G. Smith’s 2012 book, “JFK and the Integration of the Washington Redskins,” where Smith wrote that Marshall was as upset about the federal government forcing him to integrate (Washington’s stadium is on federal land) as he was at the prospect of diversity.

“Why negroes particularly?” he asked. “Why not make us hire a player from another race? In fact, why not a woman? Of course, we have had players who played like girls, but never an actual girl player.”

The Kennedy administration gave Marshall a choice: let black players on his team, or go find another stadium to play in. The team was integrated, but more than half a century later, many believe Washington’s NFL team is still dragging its feet on racial matters.