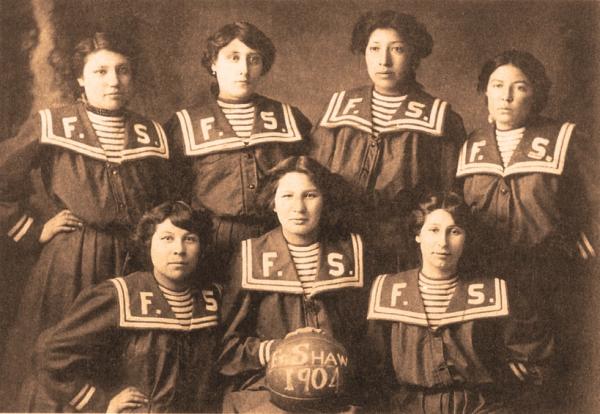 Montana State University News Service
Some of the women from the 1904 Fort Shaw basketball team. Pictured in the front row, are Genie Butch, Belle Johnson, and Emma Sansaver. In the back row, from left, are Nettie Wirth, Katie Snell, Minnie Burton and Sarah Mitchell.

Tip-off to basketball season is right around the corner. Shoni and Jude Schimmel are back at the University of Louisville, poised for another run at the national championships. Two years ago, Tahnee Robinson became the first Native American woman to be drafted by the WNBA and last spring, Angel Goodrich became the second. Indian girls are playing at many schools across the country and basketball reigns supreme throughout Indian country.

But Indian women and basketball are not as new as many think. In 1904 the women’s basketball team at Fort Shaw Indian Boarding School in Montana were world champions.

This arch at the site of the Fort Shaw Indian Boarding School proclaims the team as World Champions. (Jack McNeel)

Basketball was in its infancy, but rez ball was born.

James Naismith invented the game just 13 years earlier, so it truly was a new sport. Even during those 13 years it had evolved to something more resembling the game today. The clock didn’t stop, so the scores were lower and field goals only counted for one point, but the young women ran the full court as they do today. The uniforms could better be described as bloomers and the ball was slightly larger back then.

The young women on the Fort Shaw team came from seven tribes throughout Montana and Idaho. Some of the girls had played shinny or double ball, but had likely never played this new sport. Their first game was against a high school boy’s team in Great Falls. The young ladies rode 40 miles in horse drawn wagons to play that game, winning and actually doubling the score of the boy’s team.

That was just the beginning. They beat the men’s teams at the University of Montana and Montana State by scores of 25-1 and 22-0. At halftime they entertained with songs on the mandolin and violin, recited poetry, sang and did Native dances. Teams didn’t want to play them.

A granite monument below the arch contains a photo and the name of each team member along with a steel basketball. (Jack McNeel)

The 1904 World’s Fair was held in St. Louis, Missouri. Fort Shaw Indian School Superintendent Fred C. Campbell arranged for the team and other Fort Shaw students to attend and live in tipis at the Indian Exhibit. They performed dozens of times showing their basketball talent as well as musical talents to raise money for the trip.

Missouri had put together an all-star team—their coach studied Fort Shaw and spent the summer preparing for them. They thought they were ready. It was a best of three series. The score in the first game was 24-2 in favor of Fort Shaw. Missouri requested a several week delay before the second game—the final score of which was 17-6, again in favor of Fort Shaw. They were declared world champions.

Fort Shaw was to close as a boarding school in 1910. The basketball team members went their separate ways, but their story continues to be told. PBS produced a movie called, Playing for the World. In 2004, Happy Jack Feder wrote a book called Shoot, Minnie, Shoot! Another movie was produced with that same title. In 2008, Linda Peavy and Ursula Smith produced another book titled Full-Court Quest: The Girls from Fort Shaw Indian School Basketball Champions of the World.

Paulette Jordan, Coeur d’Alene tribal member, played the role of Minnie Burton in the video. Jordan was a basketball player through four years of college at the University of Washington so the role came naturally. Minnie Burton was also an Idaho resident and a member of the Lemhi Shoshone Tribe.

“There was a lot of pride in playing the role of Minnie,” Jordan said. “I felt a strong relationship to Minnie who was a leader on the team. She was a natural, tall like me, and strong. She was a full-blood Indian. They were not just winners, but gracious about it. They kept winning and every time the hate became less… began transforming into respect. I believe that team had influence on the popularity of basketball into tribal culture that lasts to this day.”

The Fort Shaw Indian Boarding School no longer stands, although a couple of small stone buildings still occupy the site—but the basketball team has not been forgotten. A large steel arch has been erected with the words: 1904 World Champions. Beneath the arch is large granite stone with a steel basketball mounted on top with a photograph of the 10 young women on the team and the names of each player engraved in the stone. It’s a wonderful tribute to an incredible team that shocked the world in 1904.