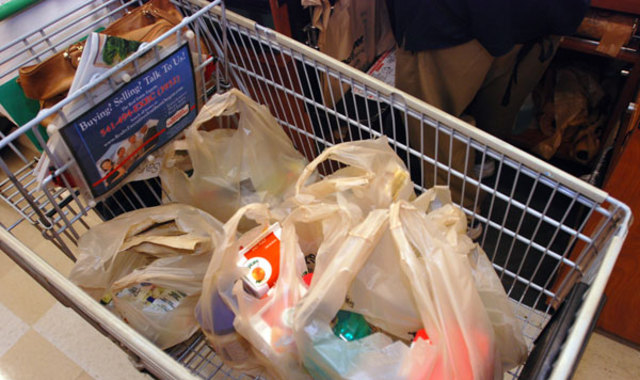 Seattle banned those thin, plastic grocery bags. So did Shoreline, Bellingham and Edmonds. But at least one city could be going the other direction. (File photo)

Seattle banned those thin, plastic grocery bags. So did Shoreline, Bellingham and Edmonds. Olympia is just the latest Washington city to consider a similar restriction. But at least one city could be going the other direction.

In 2012, following the lead of Seattle, the Issaquah City Council voted 5-2 to ban the plastic carry-out bags. The ban took effect last March and former Issaquah city councilmember Mark Mullet says the drop in plastic bag use has been dramatic.

“It’s in the millions, not in the thousands, and that’s just in the city of Issaquah. What happened is people are bringing bags from home and when people buy one or two items from the store, they just carry them out with them.”

Now a state Senator, Mullet said this is a purely environmental issue.

“These bags, they take hundreds of years to decompose so the goal is: don’t use something for 30 seconds and have it sit around for 500 years,” he said. Seattleite Craig Keller called that lazy environmentalism. “The only environment that they’re saving is in their minds. The same plastic lids on the top of their Starbucks cups that they suck constantly are also the same problem.”

Keller is co-founder of Save Our Choice. His answering machine describes the purpose of his campaign this way: “Taking a stand against those on council, hell bent to quote: ‘modify your behavior.'”

Keller and his supporters gathered enough signatures to force the city council to reconsider the plastic bag ban. King County Elections issued a Certificate of Sufficiency for a petition to the Issaquah City Council, which can either adopt the petition and repeal the ban or send the issue to the ballot in the form on an initiative.

The city council has not indicated a time frame for considering the options. The council has until Dec. 27 to notify the county elections office if it wants to put the measure on the February ballot.

“There’s broad support for restoration of consumer and merchant choice,” said Keller. But Mullet thinks the people of Issaquah favor the ban. “We actually held a special city council meeting devoted to one topic and that was plastic bags because we wanted to be sure that the city of Issaquah could give as much input as they wanted and we heard support from the community for supporting the ban.”

Mullet welcomes a vote of the people and thinks it could be an interesting campaign with plastics manufacturers paying special attention.

“I think there’s going to be an industry here that’s going to view this as sort of a battleground and they’re going to put resources in because if they can get it overturned in this city, maybe they feel it will prevent other cities from going down the same path,” reasoned Mullet.

The vote on plastic bags could be the first citizens initiative to make it to the ballot in Issaquah.