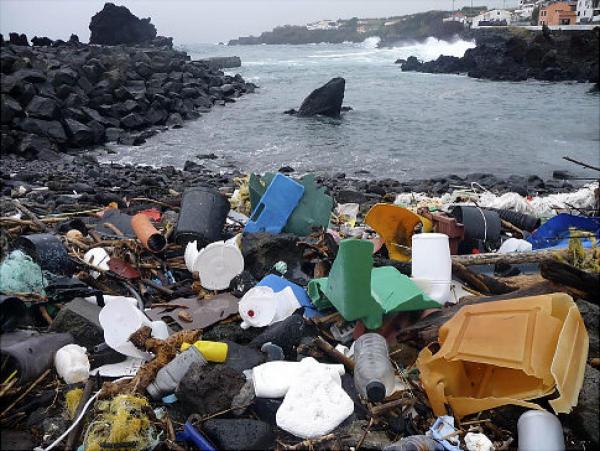 AP/5 GYRES
In this February 15, 2010 photo released by 5 Gyres, a coastal area of the Azores Islands in Portugal, is shown littered with plastic garbage.

“Thus he learned that there are spirits in the water – that water is life.” – Wichita Legend of the Water Spirit

The tragedy of Malaysian flight 370, which disappeared en route to China, has brought attention to a distressing fact about our “civilized” society, that we are now drowning in our own garbage. For a full month, searchers have had to comb through an ocean full of waste, making an already extremely difficult task almost impossible. On March 8, the day after the plane was scheduled to land in Beijing, Vietnamese air force planes spotted two massive oil slicks, each between six and nine miles long, that were at first assumed to have been caused by the airliner, but when sampled turned out to be bunker oil for ships. The next day, the Vietnamese also spotted what they thought was a life raft and a door from the plane, but those items turned out to be floating junk.

Two days later, the Chinese reported that their satellites had spotted debris from the plane in the South China Sea, between Malaysia and Vietnam, but this too turned out to be more floating garbage. As the search shifted to the southern Indian Ocean, one of the most isolated and inhospitable regions on earth, satellites from several countries began to spot hundreds of objects, but all turned out to be floating waste. The amount of garbage in the oceans is so great and widespread that it was throwing off the search and rescue teams, and in the end they were forced to focus on analyzing the radar and electronic signals to narrow down the search area.

The pollution of the oceans, and of all water, is a serious threat to our well-being, for water, as indigenous people know well, is the essence of life. Yet civilized society has an almost complete disregard for clean water. Cholera, a disease unknown in the Americas before European settlement, derives from contaminated water. As the pioneers traveled westward, using rivers, streams and lakes as toilets (while at the same time drinking from them), the now contaminated waters killed countless Indians and nearly wiped out entire tribes, such as the Comanche, Hidatsa and Choctaw. More than 150,000 Americans are also believed to have died in the pandemics of 1832 and 1849, including former President James Polk. Due to cholera, Chicago had one of the highest death rates in the world between 1885 and 1890, losing more than 12 percent of its population.

Nor has time made civilized society any wiser. Up until 1970s, with the advent of clean water legislation in the U.S., the average American city sewage treatment plant consisted of a long pipe into the ocean, or lacking a nearby ocean, a lake or a river. It was also common to dump household garbage in the oceans or lakes. New York City dumped more than a million tons of garbage a year in the New York Bight, creating the first ocean “garbage patch.” An article in Indian Country Today Media Network one year ago, entitled, “Lake Erie has a Garbage Patch That Rivals the Oceans,” found that much more needs to be done to preserve Americas water.

RELATED: Lake Erie has a Garbage Patch That Rivals the Oceans

Much of the debris floating in the oceans is plastic, which degrades extremely slowly and eventually becomes toxic to marine life. A 2006 United Nations Environment report estimated that every square kilometer of world’s ocean has an average of 13,000 pieces of plastic litter floating on the surface. In the most polluted garbage patches, located in every ocean, the mass of plastic is greater than that of plankton, the algae upon which all oceanic life depends (the grass of the oceans), sometime by an order of five to six times. Experts believe that virtually every fish, sea turtle, or seabird now has plastic inside of it. Not only are the plastics toxic in themselves, they act like sponges, soaking up other toxins in the oceans. When devoured, the toxins work their way up the food chain, eventually impacting human health.

Parasitic diseases similar to cholera are now spreading to marine mammals such as killer whales, as the ocean waters become filled with human and animal excrement. Yet little is being done to combat this menace. The last international agreement concerning ocean dumping and pollution was a protocol signed in 1996, however it was not ratified by the U.S., nor has it been ratified by enough countries (there must be at least 26) to come into force. The last international marine debris conference, held 2011 in Honolulu, ended with no concrete program for international action.

It was long presumed that dumping in the ocean meant that pollution was out of sight, and thus could be ignored. But now the chickens, or their byproducts, are coming back to haunt our modern society. The search for Flight 370 may not have found the plane yet, but it may have discovered something far more important, and far more tragic.