LAS VEGAS (AP) — Tribal leaders and U.S. officials are marking the completion of a nearly $2.4 million solar power array at a freeway travel stop and convenience store off Interstate 15 outside Las Vegas.

A ceremony was set Tuesday at the Moapa Travel Plaza at the Valley of Fire State Park turnoff about 40 miles northwest of Las Vegas.

The project was funded by an Agriculture Department High Energy Cost Grant.

Officials say the hybrid system reduces diesel fuel use by about half, cuts carbon dioxide emissions and will save money.

Twenty-one tribal energy and mineral projects just got a boost from the Department of Interior, including multiple projects to advance renewable energy on tribal land.

On Friday, the Interior Department announced the 21 tribal projects that would share in $3.2 million worth of federal grants. The projects include 13 proposals for renewable energy, including wind, hydropower and biomass. The recipients also include two oil and gas extraction projects and six projects focused on extracting limestone and other minerals.

“These grants are about strengthening self-determination and self-governance by enabling tribal nations to evaluate and promote their energy and mineral assets, negotiate the best agreements with partners or investors and develop these resources for the social and economic benefit of their communities,” Interior Secretary Sally Jewell said in a release

Not all of the tribes know how much money they’ll receive yet, but renewable projects accounted for the largest chunk of grant money at $1,972,350 for the 13 proposals. One of the tribes to receive grant money is the Crow Creek Sioux tribe in South Dakota, which has plans to build a billion-dollar wind farm. Crow Creek leaders hope the farm will provide free electricity to the 2,000 tribe members that live on the reservation and also generate electricity that the tribe could sell to nearby towns. If the tribe gets enough funding to build the project, leaders say it could produce enough energy to power 100,000 to 400,000 homes.

“We never hardly hear good news,” tribe Chairman Brandon Sazue told the Rapid City Journal of the tribe’s grant. “This was one of the greatest pieces of news I have heard since being chairman for Crow Creek.”

The tribe hopes to secure funding in time to start constructing the 150-160 turbine wind farm in early 2016.

Another initiative that secured Department of Interior funding is Montana’s Crow Tribe, which will receive $655,000 to build a hydroelectric facility at an existing dam on their reservation. That project would also provide power to reservation residents and would have the potential of supplying power outside of the reservation as well.

The grants are helping fund some projects that, if completed, would be one of only a few of their kind on tribal lands. There’s only one tribal-run wind farm in the U.S. so far — the Kumeyaay wind farm in California, which produces enough energy to power about 30,000 homes. The Cherokee Nation in Oklahoma is also working to build a 90-turbine wind farm, but that project hasn’t been completed yet. Government initiatives are looking to jump-start renewable energy on tribal land, however — in 2012 the Department of Energy gave away more than $6.5 million to 19 renewable energy projects on tribal lands, and in 2013 the DOE gave $7 million to nine tribes for wind, biomass and solar projects. 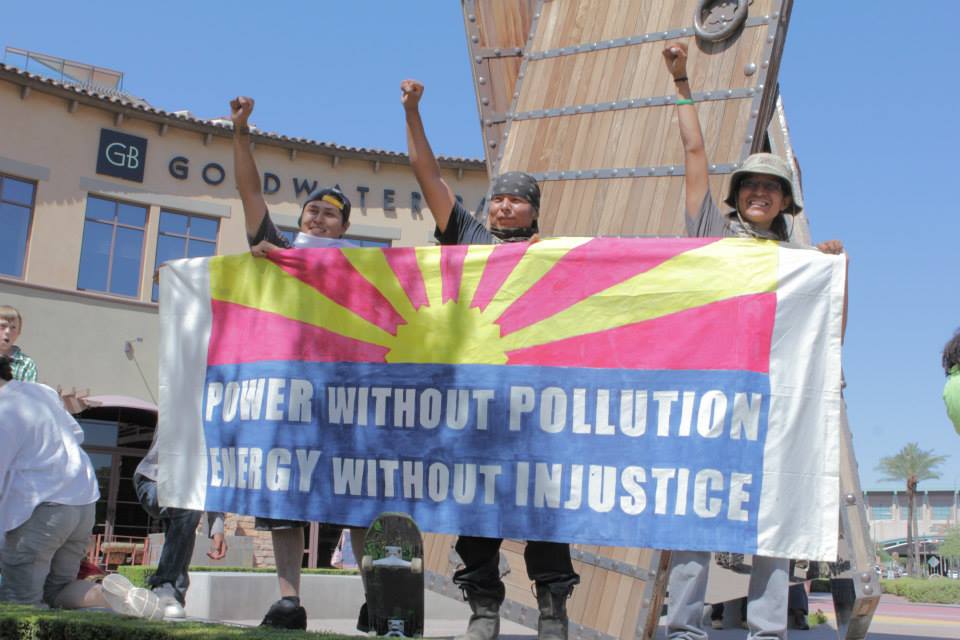 After a winding march, approximately 60 demonstrators used a massive solar-powered truck to pump water from the critical Central Arizona Project (CAP) canal into barrels for delivery to the reservation.

Flanked by supporters from across the United States, tribe members created a living example of what a Navajo-led transition away from coal toward solar power in the region could look like.

“We were a small group moving a small amount of water with solar today,” declared Wahleah Johns with Black Mesa Water Coalition. “However if the political will power of the Obama Administration and SRP were to follow and transition NGS to solar all Arizonans could have reliable water and power without pollution and without injustice.”

The demonstration was not only symbolic: the reservation needs the water they were collecting.

While this Navajo community lives in the shadow of the Navajo Generating Station—the largest coal-powered plant in the Western United States—many on the reservation do not have running water and electricity themselves and are forced to make the drive to the canal to gather water for cooking and cleaning.

This is despite the fact that the plant—owned by Salt River Project and the U.S. Department of Interior—pumps electricity throughout Arizona, Nevada, and California.

Yet, the reservation does get one thing from the plant: pollution.

The plant is “one of the largest sources of harmful nitrogen oxide (NOx) emissions in the country,” according to the Environmental Protection Agency.

While plant profiteers argue it brings jobs to the area, plant workers describe harrowing work conditions. “We are the sweatshop workers for the state of AZ, declared Navajo tribe member Marshall Johnson. “We are the mine workers, and we are the ones that must work even harder so the rest don’t have to.”

These problems are not limited to this Navajo community. Krystal Two Bulls from Lame Deer, Missouri—who came to Arizona to participate in the action—explained, “We’re also fighting coal extraction that is right next to our reservation, which is directly depleting our water source.”

The action marked the kickoff to the national Our Power Campaign, under the banner of Climate Justice Alliance, that unites almost 40 U.S.-based organizations rooted in Indigenous, African American, Latino, Asian Pacific Islander, and working-class white communities to fight for a transition to just, climate friendly economies.