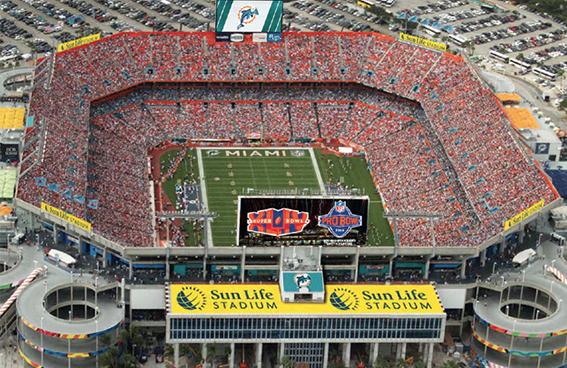 In 1985, the Associated Press reported that the Miami Dolphins were building a stadium on top of ancient remains that allegedly belonged to deceased members of the Tequesta Indian tribe. The team’s Vice President Don Poss told the AP that construction over the remains was “definitely not a deal breaker,” and they proceeded to dig them up.

In 1987, Sun Life Stadium cost $90 million to build, according to the wire service. And the football team still plays its games at Sun Life stadium today.

The Los Angeles Times reported in 1987 that archaeologists claimed that the Tequesta Indians had used the site about 800 A.D., and then, the Seminole Indians occupied the grounds in the mid-19th century. “The burial grounds were excavated in 6-inch increments as experts sifted through the diggings,” the report said.

The Miami New Times recently wrote that the Dolphins were cursed and that is why they have not been to a Super Bowl since 1985, which was several months before the remains were discovered.

Could the Miami Dolphins really have their own Curse of the Bambino on their hands? Could it be that we have found the root of all this pain and disappointment? Before you laugh it off, consider some of the facts:

– May 1985: Tequesta Indian artifacts and remains are discovered on the land where the Dolphins now play.

– May to December 1985: The Dolphins hire experts to sift through the site, recover, and remove every artifact they find.

– December 1, 1985: Less than 11 months later, the Dolphins continue construction on what is now known as Sun Life Stadium.

– 1985 to present: The Dolphins have not returned to the Super Bowl since.

You can read the rest of the paper’s article here.