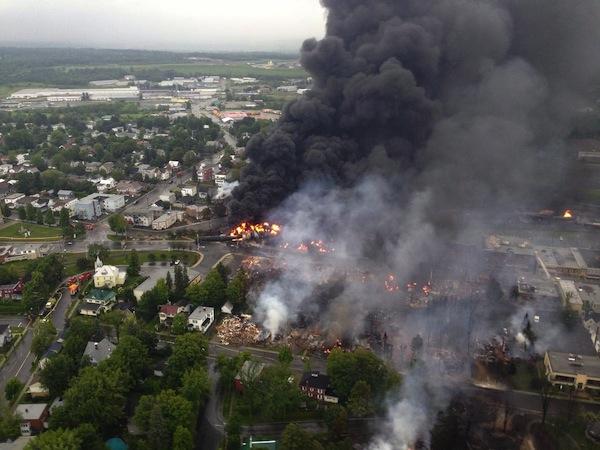 Fire rages the day after a 73-car train carrying crude oil from the Bakken shale of North Dakota to refineries in New Brunswick, Canada, burn after the train got loose and smashed into the town of Lac-Mégantic, killing 47.

As hundreds attended a memorial service in Lac-Megantic on Saturday July 27 for the 47 people killed in the train explosion that flattened the center of the 6,000-population town, the horrific accident resonated with a tribe all the way over in the Pacific Northwest.

The Quinault Nation is fighting a plan to transport oil by rail through their territory and across ecologically sensitive areas. Indeed, the July 6 accident in Quebec, in which the brakes failed on a Montreal, Maine & Atlantic Railway train and it sped downhill from its overnight resting place to derail and slam into the center of the small town, highlighted a drastic increase in rail transport of oil across the U.S. and Canada.

“It could have easily been Hoquiam,” said Fawn Sharp, President of Quinault Indian Nation, in a statement soon after the crash.

The Quinault are battling plans by the Westway Terminal Company out of Louisiana and Texas to build an oil shipping terminal in Grays Harbor with the capacity to store 800,000 barrels of crude. The company expects to transport 10 million barrels of crude through the ecologically sensitive harbor every year, the Quinault said in their statement.

In addition two other facilities to receive crude oil via rail shipments also being proposed in the Grays Harbor area, which includes marine shipping, would create “major environmental risks” to the community and the Quinault.

“The massive train, oil barge and ship traffic this project will bring to Grays Harbor is a tragedy waiting to happen,” Sharp said. “There will be spills and they will harm salmon, shellfish, and aquatic life, trample our treaty rights and cultural historic sites, and tie up traffic for extensive distances.”

Moreover the expansion of the Westway Terminals’ Port of Grays Harbor facility violates treaty rights as well as the tribe’s standards of “good stewardship and common sense,” Sharp said. “The risk is not worth a few more, unsustainable jobs. Far too much is at stake, and there is simply no way oil train proponents can pass the straight face test and tell us that their proposal is safe. Lives are at stake. Fish and wildlife resources. Water quality and much, much more. These are the same type of rail cars that will come pouring through our area, and unquestionably threaten the lives and safety of our people and resources.”

“This has been an emotional day followed by a very emotional period,” Harper said outside the church, according to AP. “It is very difficult to absorb all this when you see all of these families who have been affected.”

Several lawsuits have been filed as a result of the explosion, and both the police and federal transportation safety officials conduct investigations, AP reported.

The deadly oil-train explosion in Lac-Mégantic, Quebec, on Saturday also sparked an environmental disaster. An oil sheen has stretched more than 60 miles down a river that’s used as a source of drinking water.

By Tuesday morning, 13 people had been confirmed dead and some 37 were still missing after runaway train cars loaded with fracked crude from North Dakota derailed in the town and ignited. Lac-Mégantic’s fire chief said the fire is now under control, but a small area of town is still off limits for safety reasons. Emergency crews continue to search for bodies of the missing. Officials are urging relatives to provide them with DNA, such as on toothbrushes, to help them identify the dead, and are warning that some of the bodies may never be identified.

Meanwhile, water and environment officials are facing up to a crisis of their own. An estimated 26,000 gallons of oil that spilled from the rail cars flowed into the Chaudière River. Residents downstream are being asked to conserve water as municipalities switch to backup sources. From CBC News:

Quebec Environment Minister Yves-François Blanchet told CBC’s Quebec AM that he flew over the Chaudière River Sunday to see the extent of the damage caused by the oil spilled from the derailed tankers.

“What we have is a small, very fine, very thin layer of oil which, however, covers almost entirely the river for something like 100 kilometres from Lac-Mégantic to St-Georges-de-Beauce,” he said.

“This is contained at St-Georges-de-Beauce for the time being, most of it, or almost entirely, and we are very confident we will be in a position to be able to pump most of it out of the river. However, there will be some impact.”

A spokesman for Quebec’s environmental ministry says floating barriers and other tools are being used to block the oil from heading downstream.

But the pollution has already reached the nearby town of Saint-Georges, prompting fears oil could flow into the St Lawrence River.

Air quality in the town is also a concern. Officials say the air is safe, but an odor may remain. 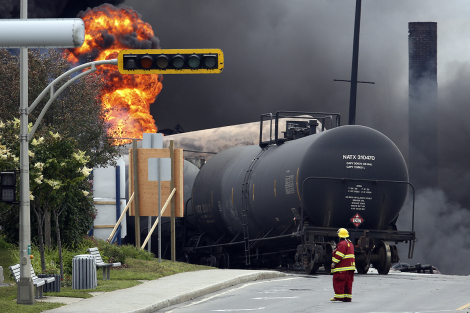 Reuters/Mathieu Belanger. A firefighter walks past a burning train at Lac-Mégantic, Quebec.

The latest disaster caused by the transport of oil across North America has wrecked the town of Lac-Mégantic in Quebec. A driverless train loaded with crude from the Bakken oil fields of North Dakota derailed and exploded early Saturday in the town’s center.

Dozens of buildings were leveled and at least five people were killed, while 40 more were still missing as of Monday morning. The fracked oil was en route to New Brunswick, which is home to the largest oil refinery in Canada. From Reuters:

The train, which did not have an engineer aboard when it derailed, was hauling 72 tanker cars of crude from North Dakota to eastern Canada. It rolled downhill from an overnight parking spot, gathered speed and derailed on a curve in the small town of Lac-Megantic at 1 a.m. on Saturday.

Each car carried 30,000 gallons of crude oil. Four caught fire and exploded in an orange and black fireball that mushroomed hundreds of feet into the air and flattened dozens of buildings, including a popular bar.

The disaster plunged the media into debate: Is it safer to move oil through underground pipelines (à la Mayflower, Kalamazoo, and Keystone XL), or to move it by rail?

Frackers and tar-sands miners are extracting record amounts of oil in America and Canada. Existing pipelines can’t carry the whopping bounty to refineries, so energy companies are seeking to lay lattices of new pipes. Meanwhile, the glut of liquid hydrocarbons is being loaded onto trains, which are being sent vast distances — and are triggering high-profile spills and accidents.

The Toronto Globe and Mail argues in the wake of the Lac-Mégantic disaster that “[p]ipelines are the safest way of transporting oil and natural gas, and we need more of them, without delay.” The New York Times considers the pipeline-vs.-train question more impartially, quoting environmental experts:

Edward Whittingham, the executive director of the Pembina Institute, an environmental group based in Calgary, Alberta, said there was not conclusive research weighing the safety of the two shipment methods.

“The best data I’ve seen indicates,” he said, “depending on your perspective, both are pretty much as safe as each other, or both are equally unsafe. There’s safety and environmental risks inherent in either approach.”

But the comparison obfuscates an obvious reality: The oil can’t be moved safely at all. (Same goes for natural gas.)

After a string of pipeline and rail accidents in recent years, it’s clear that letting the energy industry move incendiary bulk fluids around the continent is like tossing a book of matches into the crib to keep little Johnny happy while his folks stare at the television. And that’s without even considering the climate impacts of the fossil-fuel mining binge, or the many hazards of fracking.

The weekend tragedy is a reminder that the energy industry can’t be trusted to do anything safely, let alone transport oil.