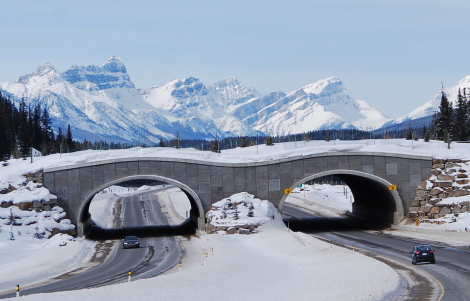 Bear bridges aren’t just beautiful — they work! That’s what you learn when, instead of sunning yourself and running through the sprinkler, you spend three summers working on your collection of bear fur:

For three years, researchers from Montana State University spent their summers collecting bear hair. The samples, collected on both sides of the 50 mile stretch of the Trans-Canada Highway that cuts through Banff National Park, prove what the researchers had suspected: wildlife underpasses and bridges were helping enough bears move back and forth across the highway to keep the populations healthy.

Not only does this mean the researchers can make a slew of bear-fur scarves, hats, and finger puppets, but that animals are using the paths specifically created to enable their boneage. About 10 percent of the bear population would need to cross the highway in order for its size not to dwindle; the three-year study showed nearly 20 percent of area grizzlies and black bears were using special crossings. Woohoo! Since drivers hit a million vertebrates every day, it’s vital that bears and other animals have an alternative to dodging cars:

Underpasses provide the cover cougars and many small mammals need, while the bridges and overpasses let moose and elk traverse in their preferred open-sky habitats. Cameras at each of the passageways have recorded hundreds of thousands of crossings for many different species, including bears, wolves, lynx, deer, elk and moose.

Like a bridge over troubled traffic, this will ease bears’ minds.