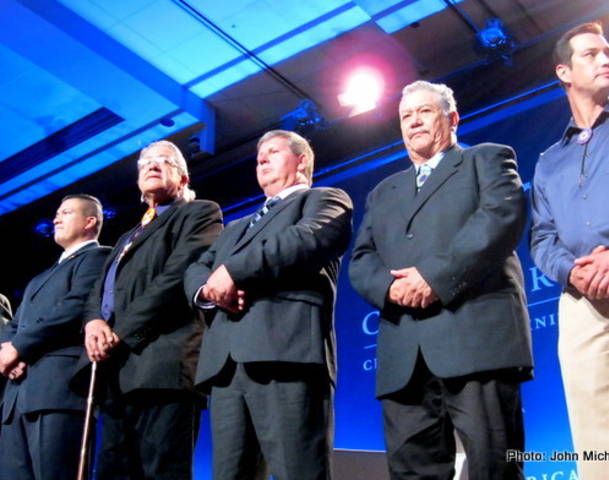 Tribal leaders stood on stage last week in Chicago, where the announcement of first-ever, historic wind energy initiative on Tribal land is expected to bring new life and livlihoods to chronicly impoverished reservations in South Dakota.

Clinton Global Initiative America is an annual event that brings together leaders from the business, foundation and government sectors in an effort to promote economic growth in the United States. The tribes’ initiative comes at a time when renewable energy investment is increasingly a national priority. Through the project, the tribes stand to infuse up to $3 billion directly into the South Dakota economy, an amount roughly equal to the impact of the entire manufacturing sector in South Dakota in a given year.

The planned project could generate 1-2 Gigawatts of power annually. Measured conservatively, that’s more than enough power to electrify the homes in Denver, Colo., for the next 20 years, the typical useful life span of the wind turbines.

The majority of the project’s funding will come through the sale of bonds by a multi-tribal power authority. The bonds are expected to be available to investors in about two years, following a critical planning and preparation stage.

In separate but related news, Deputy Secretary David J. Hayes of the Interior for the Obama administration discussed efforts under way to implement a tribal land buy-back program with reporters on a conference call Tuesday afternoon.

Hayes was joined on the call by Assistant Secretary – Indian Affairs Kevin Washburn, who provided details on the next phase of the Land Buy-Back Program for Tribal Nations (Buy-Back Program or BBP), including launching pilot efforts to establish cooperative agreements with tribal governments.

The buy-back program implements the land consolidation provisions of the $3.4 billion Cobell Settlement, which will funnel $1.9 billion into a trust land consolidation fund to consolidate fractional land interests across American Indian property. Background information from the Department of the Interior (DOI) said allotments of land provided individual American Indians in the 19th and early 20th centuries have grown to hundreds and even thousands of individual owners, which makes leasing or developing the parcels difficult.

The result, as former US Sen. Byron Dorgan of South Dakota confirmed in an exclusive interview with Allvoices following DOI’s earlier announcement, is that highly-fractionated allotments lie idle, unable to be used for any economically beneficial purpose.

As Dorgan, who now co-chairs the Arent Fox Government Relations practice and who helped negotiate the Cobell Settlement said, when one person in 2,000 or even 10,000 people can disagree, thereby killing any hope of affiliating land for purposes of economic development, moving forward is hard.

Hayes, who will be leaving DOI soon and said he was proud of his role in helping settle and implement the Cobell Settlement, told reporters that all legal questions have concluded as of last November and that opening the door to implementation now of the $1.5 billion of settlement funds for the BBP itself will be used to purchase fractionated interest so land is available for tribal use.

Historical problems caused the land to be locked up and unusable, but Hayes said 220,000 individual owners on 150 reservations will be impacted by Tuesday’s announcement. Based on fair compensation on a “willing seller basis,” Hayes said the federal government will turn land back over to the tribal nations.

From “government to government” is how Hayes phrased the new relationship between the US government and the six Native American tribes covered by the settlement, a level of respect tribal leaders have waited a long time to realize.

It will take 10 years to spend down the $1.9 billion in settlement funds, Hayes said, adding that it’s his expectation to initiate purchase offers by end of the year. Within the next three years or by the end of the Obama presidency, Hayes believes the BBP will be well on its way to spending down and returning millions of acres of land to tribal control.

The lawsuit and its settlement resolves claims that the federal government violated its trust duties to individual Indian trust beneficiaries, including not providing a proper historical accounting relating to IIM accounts and other trust assets, mismanaging individual Indian trust funds and violating its trust responsibilities for management of land, oil, natural gas, mineral, timber, grazing, and other resources.

Agreements with tribes for program administration has already begun, he said, adding that “we have heard Indian county and we must have support for tribal leaders” as we formalize agreements tribe by tribe. Part of the checks and balances system is providing an oversight board for the BBP to be chaired by DOI Secretary Sally Jewell, who Obama appointed to guide the agency during his second term.

Jewell replaces Ken Salazar, a former US Senator from Colorado, who guided DOI during Obama’s first term starting in 2009.

Hayes said regular meetings at the highest levels can be expected.

A feature of the Cobell Settlement was directed toward higher education scholarships. The settlement authorizes up to $60 million in scholarships for Indian students, to be administered by The American Indian College Fund. The money can be used at tribal colleges, vocational institutions and public and private universities. Twenty percent of the annual scholarships can be used for graduate studies.

The Cobell Settlement requires a board of trustees to oversee the scholarship fund. The Interior Department and the Cobell plaintiffs will each choose two members. The American Indian College Fund will choose one member.

Washburn said that if the systems are set up right from the beginning, there will be upfront advantages from advance planning and behind-the-scenes computer programs that will enable the effort to “move out methodically through a number of reservations.”

Giving a taste of the flavor, he said, shows how the program is gearing for the BBP. Washburn said staffing is up and that outside experts have been retained to assure we have the best program of appraising property as the basis for an offer. Third party groups, he said, are reviewing methodologies and making valid recommendations.

“Were a bunch of suits in Washington,” Washburn said. “We need tribal leaders” to engage when negotiating different agreement with each tribe to factor in their needs. He looked to having 10-12 tribes “on board, moving out from the train station” by the end of the year. Washburn likened the tribes to guinea pigs as sovereignty is returned the tribal nations.

Dorgan, who chaired the Senate Committee on Indian Affairs and the Senate Subcommittee on Energy and Water Development, believes that while the wind energy project is not dependent on Tuesday’s announcement, it can only help it along.

He said in a phone conversation with Allvoices that it’s not needed for the Sioux Tribes of South Dakota’s wind power initiative. Helping to negotiate the Cobell Settlement, Dorgan said that while there is enough Tribal land available for the wind power initiative, the real resource of value isn’t buried below the ground, but blows above it.

“The government may own the minerals below the land, but the wind above it belongs to the tribes,” he said.

If you like to write about US politics, enter Allvoices’ “The American Pundit” political writing contest. Allvoices is awarding four $250 prizes each month between now and Nov. 30. These monthly winners earn eligibility for the $5,000 grand prize, to be awarded in December. If you do not already have a free account, sign up here.

John Michael Spinelli is based in Columbus, Ohio, United States of America, and is an Anchor for Allvoices.