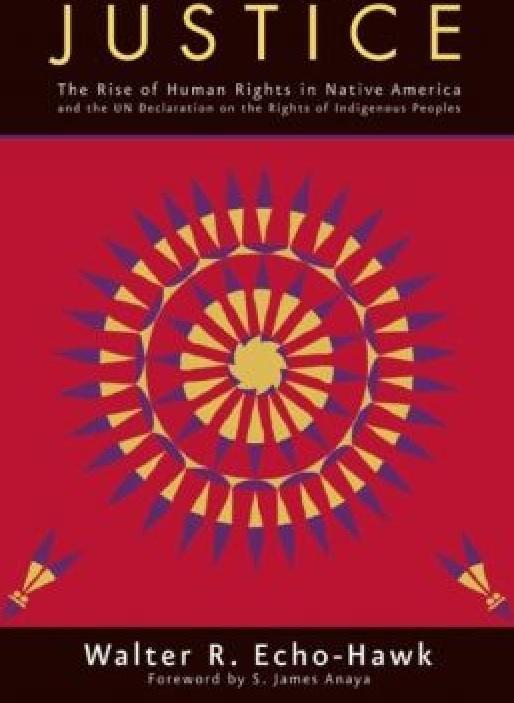 With his distinctive round eyeglasses and long, gray braids, Walter Echo-Hawk looks rather more owlish than revolutionary.

But the longtime Pawnee speaker, author and lawyer who toils on the frontlines of federal Indian Law makes a strong argument that it is time to drive a stake into the legacy of colonialism in his new book, In the Light of Justice: The Rise of Human Rights in Native America and the UN Declaration on the Rights of Indigenous Peoples (Fulcrum, 2013).

That stake could be the United Nations Declaration of the Rights of Indigenous Peoples, which Echo-Hawk sets out to examine and explain. Adopted by the United States in December 2010, it has yet to be integrated into law or policy. This provocative book, educational and inspiring for indigenous and “settler” alike, can show the way.

RELATED: Bringing UNDRIP to the People Is Next Step for Indigenous Rights: Chief

Echo-Hawk says he was motivated to write this volume as something of a hopeful counterpoint to his previous book, In the Courts of the Conqueror, which examined the worst cases in federal Indian law.

RELATED: In The Courts of the Conqueror: A Short Review

What jumps out at anyone studying mainstream attitudes toward this country’s Indigenous Peoples is the fact that what much of white America thinks of as a bygone era of treaty making, frontier warfare and taming the West is, to Indian people, current events. Life under the heel of historical oppression looks far different than the view of the boot wearer.

This difference in perspective goes deep to the bubbling heart of the notion of Melting Pot America, dividing white from brown, immigrant from Native. The confusion over Indian and Non-Indian relations becomes clear in this well-focused book when Echo-Hawk identifies a root cause that is often forgotten, or is not understood in the first place: colonial policies and their attendant settler mind-set.

It’s symptomatic of a severe disconnect, to say the least, that a nation founded upon principles of liberty and justice and freedom for all—one willing to shed blood in defense of these principles against oppressors, no less—could treat its original inhabitants with such astonishing injustice.

Echo-Hawk demonstrates how this dynamic plays out in America’s courtrooms, especially the U.S. Supreme Court. Chief Justice John Marshall is one of the nation’s most revered jurists, yet it was Marshall who introduced the doctrine of conquest into federal Indian law in the 1823 decision Johnson v. M’Intosh, ruling that colonists owned any Indian lands “acquired and maintained by force.” Tribal people, he wrote, were “fierce savages, whose occupation was war,” and thus did not warrant international legal protections for countries under invasion.

Doctrines of conquest and discovery used by European nations during 500 years of colonization, Echo-Hawk writes, allow governments to usurp indigenous land, property and rights without consent even today. Though Marshall later evolved his thinking, Echo-Hawk notes, the seeds planted in 1823 still exist. The Roberts Court, he writes, is one of the most hostile to Indian rights—the Baby Veronica ruling being the most recent example—and is actively eroding gains made in recent decades.

For every M’Intosh, Echo-Hawk says, there were other, more reasoned, decisions such as Worchester v. Georgia in 1832, in which the high court rejected conquest as an absurd legal fiction. But even as that ruling was being published, the federal and state governments were in the grip of the Indian Removal Movement, evicting Southern tribes from their homelands.

These “clothes of the conqueror,” as Echo-Hawk calls them, do not befit a democratic nation such as ours. He offers keen insight into the parallels between the long, painful African-American struggle for equality and the fight of tribal people to maintain their rights. The Civil Rights movement for many years used a counterintuitive tactic, known as the Margold Plan, to file a multitude of lawsuits urging the federal government to uphold its legal standard of “separate but equal.” Case after case after case was pursued to this end, forcing school districts and local governments and the courts to confront racial inequalities and cynical government policy.

Over several decades this approach focused at least a trickle of attention onto racial injustice, scored court victories and gained allies. Then, Brown v. Board of Education signaled a shift in tactics to a direct assault in order to show, Echo-Hawk writes, that “separate but equal” was unconstitutional.

Echo-Hawk believes that Indian Country is poised at a similar tipping point.

Skirmish after skirmish in often hostile federal courts has carved some sturdy pillars for treaty rights and sovereignty. But, Echo-Hawk argues, the cultural survival of Native America depends on a march to justice, and so does America’s evolution from a settler state to a more fully just society.

Echo-Hawk is a lawyer, and his topic of international human rights sometimes pulls him into dense thickets of language. But far from being a slog, the words in this book are illuminated by his passion for the topic, and his deep knowledge of the fight for fair treatment in federal courts. His words often burn with clarity, as does his message: Although the U.N. Declaration is a powerful tool for asserting human rights for Indigenous Peoples, it will not implement itself.

“Indigenous rights are never freely given—they must be demanded, wrested away, then vigilantly protected,” Echo-Hawk writes. “That is the essence of freedom.”