Everyone involved in Whatcom County’s water rights disputes seems to agree that a local settlement would be a good idea, but representatives of Lummi Nation have made it clear they will not sacrifice Nooksack River salmon to benefit farms, industries or cities.

Speaking at a May 30-31 water supply symposium at the Hampton Inn in Bellingham, Lummi Nation attorney Diana Bob said the facts were clear. 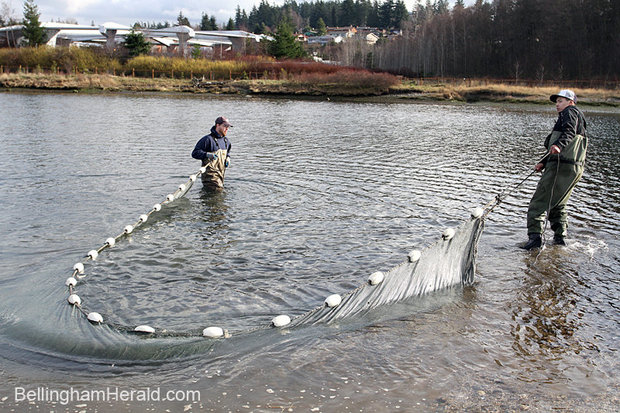 Dan Kruse, left, and Robert Teton of the Lummi Natural Resources Department, use a net to try to catch juvenile salmon to count on Feb. 15, 2012 at Marine Park in Bellingham. The department counts juvenile salmon around Bellingham Bay about once every two weeks. The Lummi and Nooksack tribes have asked federal agencies to file a lawsuit on their behalf to help determine the amount of water they should be guaranteed to bolster Nooksack River salmon stock.
COLIN DILTZ — THE BELLINGHAM HERALD

“We have fish dying in the Nooksack River because we do not have sufficient flows,” Bob said. “That is an unacceptable proposition to Lummi.”

The flow of water in the Nooksack and its tributaries is reduced by withdrawals of water for the city of Bellingham and Cherry Point industries, but Whatcom County farms withdraw even more to irrigate raspberries and blueberries. River water is also used to irrigate cow pastures in dry months.

Both the Lummi and the Nooksack Indian Tribe have a federally recognized right to catch Nooksack River salmon. The tribes have asked federal agencies to file a lawsuit on their behalf to force the state to take steps to define the amount of water that they should be guaranteed, to bolster the flow of water in the river and its tributaries. That likely would mean curbing the amount of water that other users are allowed to withdraw.

The tribes asked the feds to file the lawsuit more than a year ago, and so far there has been no word of a response.

Farmers admit that more than half the water they withdraw is not authorized by state law. Farm groups’ attempts to negotiate a deal with tribes have broken down, as have negotiations between the tribes and city of Bellingham. The city diverts water from the middle fork of the Nooksack River to replenish its direct water source, Lake Whatcom.

While the city has reduced its take of river water and could likely cut it even more, berry growers could be badly squeezed.

Marty Maberry, a prominent fourth-generation berry grower, said he too wanted to see salmon populations increase. He suggested that if farmers can get enough water to stay in business, they could help bolster the amount of water in streams by drilling new wells to spill into streams. He said underground water supplies are abundant in the county.

In many cases, pumping from wells also can reduce the flow of water in nearby streams, making solutions complex. But cutting off the water supply to Whatcom County farms is a poor response, Maberry said.

“The production of food and the care of the land that we farm runs as deep red in my blood … as it does in tribal members about fish,” Maberry said. “They were here first, but we were here second or third.”

He questioned the logic of taking Whatcom County fields out of production.”

We’re in the most natural place to grow food that you can find anywhere in the United States,” Maberry said, adding that putting farmers out of business because of tribal water and fishing rights would embitter the community.

Lummi representative Randy Kinley said the tribes don’t want to put farmers out of business, but they are not afraid of stirring up resentment if that’s what it takes to guarantee their rights.

“We’ve been there and I’m not afraid to go back there,” Kinley said, referring to the 1974 federal court ruling that recognized treaty fishing rights and forced dramatic reductions in salmon harvests by non-Indians.

“That’s not saying we won’t sit at the table,” Kinley said. “We want to be community members. … We hope we can keep the community together, but the community has to understand where we’re coming from. … We don’t want to put anybody out of business, but you have to understand the predicament you got yourselves into.”

Kinley and others noted that withdrawal of Nooksack water for agriculture has increased rapidly in recent years with little oversight by the state or Whatcom County.

The proposed Gateway Pacific Terminal coal export pier also would use river water from the PUD. PUD spokeswoman Rebecca Schlotterback said Gateway Pacific has already lined up its water supply via a PUD contract that extends to 2042.

While the PUD has a legal right to Nooksack water to cover its industrial customers, that right (and every other Nooksack River water right) is considered “junior” to the tribes’ water rights, since they were here first. Attorney Jay Manning, former chief of staff to Gov. Chris Gregoire and former director of the Washington Department of Ecology, said the PUD’s right to its water supply is not ironclad in that situation. Other water users also may be ahead of the PUD in the water line, if the available supply of water is cut back by a court order that allocates a larger share of water to the tribes for salmon populations.

“It’s going to be a function of math,” Manning said. “Where is the PUD’s right in that chain of priority? … Will there be enough water for the PUD to honor that (Gateway Pacific) contract? We don’t know that.”

Manning urged the crowd not to despair. He said workable solutions can be developed at the local level.

“If we don’t figure this thing out on our own, it is going to be figured out for us,” Eskridge said. “Somebody with a little bit more authority is going to shove it down our throats and we are not going to like that.”

Several speakers urged people to continue to work for a local agreement. Two of those speakers suggested that the tribes still may be motivated to make a deal, because there is no guarantee that the federal government will agree to take the state to court, and no guarantee such a court action would give the tribes all the water they want for salmon.

If any one person was absolutely certain they would prevail in a lawsuit, they would have sued long ago,” Bucknell said.

Bucknell also observed that no settlement will be painless.

“If you think there’s a solution that everyone in this basin is going to love, you’re delusional,” Bucknell said.