When the story appeared about Tony Picard, the 400-lb running back and nose tackle for White Swan High School, it was an immediate sensation. Picard appeared in local and national news interviews, including CNN and ABC’s Good Morning America. A YouTube video of a collection of plays his plays gained more than 3 million views. ICTMN caught up with Picard for a Q&A to further introduce him to Indian Country. 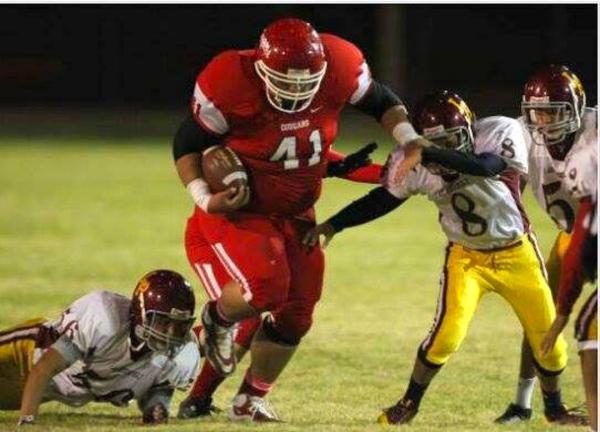 What has happened to you since the story came out?

I’ve been getting multiple phone calls. I went on national news. It’s been pretty crazy. I’ve still got more to do.

What has your reaction been to all the attention?

At first it was just crazy. All the attention is nice, but after so much, it kind of gets to you. I’m liking it, but I’m not getting all big-headed about it.

Have you heard from other college coaches since the story came out?

Yeah. I’ve heard from quite a few actually. [I’m] heading up to Washington State University for a recruiting trip.

How are your teammates taking it?

What is your hope for the future, five or ten years down the road?

I’d be finishing my last year of playing college football. I wouldn’t mind playing in the pros, and I think it would be an honor to play in the NFL. Other than that, if I don’t go to the NFL, I’d go to school for forestry or be a wildlife conservation officer.

What do you think about when you shake the other team’s captain’s hands?

Honestly there’s nothing going through my mind. I just shake their hand to show some sportsmanship. I don’t want to beat them up, but just win the game.

Do your teammates have a nickname for you?

Everybody calls me “Big Tone.”

Away from football, do you have hobbies?

What animals have you taken?

Do you have a girlfriend?

Do you feel you’re pretty much a typical high school senior?

Yeah. A lot of people see me as famous right now, but I am just a normal high school student.

In a historic move, the U.S. Department of Justice has agreed to notify Yakama tribal police before executing search and arrest warrants against tribal members on tribal land.

The move could help widen the path for the Yakama Nation, a sovereign nation, to have its full civil and criminal authority over its people returned.

“It’s historical from the standpoint that there is not another agreement like this with any other tribe and the U.S. Department of Justice,” Tribal Council Chairman Harry Smiskin said Monday during a telephone interview.

For decades, the lack of procedures involving search and arrest warrants between tribal and nontribal authorities on the 1.2-million-acre reservation have sparked disputes, including the Feb. 16, 2011, federal raid on King Mountain Tobacco, which is owned and operated by Yakama tribal member Delbert Wheeler in White Swan.

Federal authorities took computers, records and other documents from Wheeler’s business without informing tribal leaders and even blocked tribal police from entering the property during the raid.

In response, the tribe sued the U.S. Department of Justice in March 2011 for allowing the FBI to execute the raid without notifying tribal authorities. Also named in the lawsuit were Yakima and Benton county sheriff’s offices and government agencies in Virginia and Mississippi for their involvement in the raid. Wheeler is accused of avoiding state cigarette taxes in those states.

Similar agreements have been reached with Yakima and Benton counties and Virginia and Mississippi authorities, and the case subsequently has been dismissed.

Smiskin said the agreements reaffirm the tribe’s ability to govern itself and clearly establish procedures for outside agencies seeking to arrest tribal members on tribal land.

Benton and Yakima counties have agreed to not only allow a tribal police officer to be present when executing such warrants, but also to book tribal suspects into the tribe’s jail and go through an extradition process.

However, those arresting procedures may not apply to federal authorities who often have jurisdiction over serious cases on the reservation, Smiskin said.

Those cases usually are forwarded to the FBI from tribal police.

Smiskin said he’s seen improved communication between federal and tribal authorities since discussions about the agreement began not long after the lawsuit was filed.

“They have been very cooperative in that regard, in alerting us before coming on to the reservation to issue any warrants,” he said.

FBI spokeswoman Ayn Sandalo in Seattle said she couldn’t comment on the agreement because it was part of litigation, but said the FBI has always worked well with tribes.

“The FBI has always valued its partnerships with tribal authorities,” she said. “So for decades now, we’re continuing to build on that foundation and looking for ways to improve our working relations.”

For more than half a century, civil and criminal authority over tribal members on tribal lands has been confusing at best.

In 1855, the Yakamas signed a treaty with the federal government that allowed the now-10,000-member tribe to govern itself. It has its own police department and jail.

But in 1953, Congress enacted Public Law 280, which allowed several states to take over criminal and much civil authority over tribal members on their own reservations.

Yakama tribal authorities have retained much criminal authority over its members, but are now petitioning the state in a process called “retrocession” to have the rest, including civil authority, over its people returned.

Smiskin said the agreement could strengthen the tribe’s petition.

“I assume it would add to the petition for retrocession,” he said.