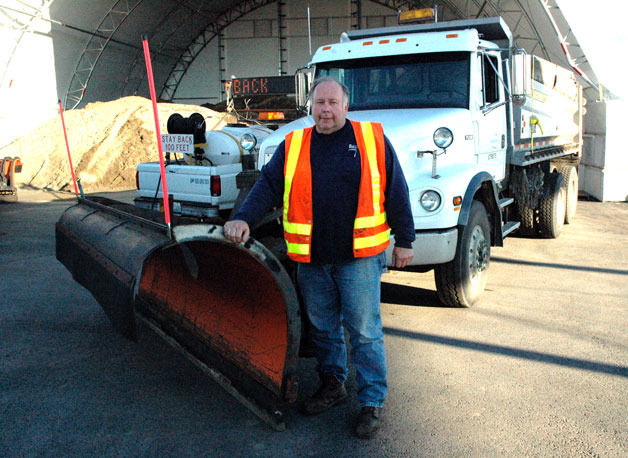 Eric Erga, Maintenance 2 Worker with the city of Marysville, stands ready by one of the city’s plow trucks for winter weather to come.
— image credit: Kirk Boxleitner

MARYSVILLE — Although the freezing temperatures that have already arrived could be coupled with precipitation over the weekend, the city of Marysville began planning for winter snow and ice when the fall had barely started.

“We’ve got between 700-800 tons of sand here at Public Works,” said Charlie Burke, Streets and Surface Water Manager for the city of Marysville. “We’ve got an additional 200-250 tons at the north end of town, to take care of that area and the Lakewood triangle. We actually reclaim a lot of our sand.”

Burke touted the city of Marysville’s fleet of vehicles equipped for snow and ice control, including four 10-yard trucks and a single one-ton truck for plowing and sanding, another 10-yard truck that sands exclusively, two five-yard trucks, and another truck that dispenses anti-icing liquid.

“We provide 24-hour coverage, but we split it into three eight-hour shifts from Monday through Friday, and two 12-hour shifts during the weekend,” Burke said. “The number of employees per shift is slightly heavier during the day, but you’ve got about 10 during the day, between eight to 10 on the swing shifts and around eight to nine at night.”

Burke characterized last year’s winter as mild, since the city only used 830 yards of sand on its streets, but he agreed with city of Marysville Public Works Director Kevin Nielsen that road safety remains a top priority for the Streets Department, as it maintains 196 miles of streets within the city to keep traffic moving throughout Marysville as efficiently as possible.

“We check the weather forecasts daily,” Burke said on Wednesday, Dec. 4. “When we had that cold snap on Monday, [Dec. 2,] we put down de-icer, which lasts for a few days, depending on the temperature, the wind and the moisture in the air. At least every three days that the temperature is below freezing, we lay down more de-icer.”

Even before any de-icer was applied to the city streets, the city began amassing its sand supply and assembling its snow and ice response crews in September, before it met with the Washington State Department of Transportation in October to review any changes to their routes, procedures or equipment. Prior to the city’s subsequent meetings with the Marysville Police Department, the Marysville Fire District and the Marysville School District in November, to review their resources and map out how they might overlap, city crews conducted an in-house training exercise in early November.

“It’s a field exercise that gets them used to the trucks and equipment again,” Burke said.

“We’re proactive in our approach, ready and prepared for any major snow and ice events that affect Marysville this year,” Marysville Mayor Jon Nehring said. “Our dedicated snow and ice response teams are ready to keep traffic moving and motorists safe on local roadways, to the best of our ability and with the least amount of disruption, while protecting lives and property.”

Just as city of Marysville Public Works and Emergency Management staff meet to share strategies and information with neighboring jurisdictions and utilities before the arrival of winter weather, so too will the city’s in-house database system track its dispatched crews’ responses to create a more efficient work flow. Nielsen added that the city’s snow and ice removal plans aim to augment that efficiency further by designating snow and ice routes, for sanding and plowing, according to prioritized zones based on the streets’ topography, traffic volumes and any special usage.

Street crews will concentrate their snow and ice removal efforts on arterials leading into and out of the city, as well as arterials on hills within the city limits, routes providing fire and police access, and then all other arterials within the city limits. As such, city crews’ responses will be focused on priority routes and arterials, such as State, 51st, 67th, 83rd and Twin Lakes avenues, as well as Fourth, Grove, 88th, 116th, 136th, 152nd and 172nd streets west of I-5 in the Lakewood area, and Sunnyside, Ingraham and Smokey Point boulevards. A full map of the city’s snow routes can be found on its website at http://marysvillewa.gov.

“We go all-out to make our roads as accessible as possible for the public, and commuters heading to and from work or schools, but the city doesn’t have the resources or the equipment to plow or sand residential neighborhood streets and cul-de-sacs,” said Burke, who acknowledged that city crews can remove snow and ice outside of those parameters, if requested by Marysville Police or Fire personnel, even as he deemed this a rare occurrence.

“We have crews driving sanitation trucks and other heavy Public Works vehicles on a daily basis, in addition to the police and their vehicles,” said Nielsen, who warned that the city might close certain roads during winter weather due to safety concerns. “We won’t jeopardize the safety of city employees by putting them in dangerous winter driving situations.”

When “Snow Closure — Do Not Enter” signs and barricades are placed at these locations, motorists and even pedestrians are advised not to go around them.

“In general, be cautious and use common sense when out driving or walking in freezing weather,” Burke said. “Make sure your tires are appropriate for the weather, either studded or with chains, and if you have to park on the side of the road, park safely. Our plows are about 10-12 feet wide, so it’s hard for them to move around a lot of cars.”

For the most current online information about local emergency or road conditions and preparedness, you can visit the city’s website at http://marysvillewa.gov, which includes several interactive features, among them an Emergency Alert Center that offers the latest updates. You can sign up to get emergency alerts sent to your email address and cell phone through the site’s “Notify Me” email subscription service.

Updates are also posted on the city’s Facebook and Twitter sites, as well as on Marysville Comcast TV 21 and Frontier TV 25 cable access stations. You can even call the city’s message-only Emergency Alert Hotline at 360-363-8118. For water and sewer emergencies during business hours, call 360-363-8100, or 911 after hours.

Freezing temperatures and predicted snowfall around Snohomish and North King Counties.  Over the next week highs of 37 degrees, lows from the  mid twenties into the teens. 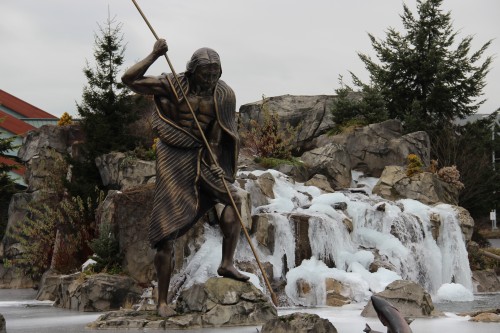