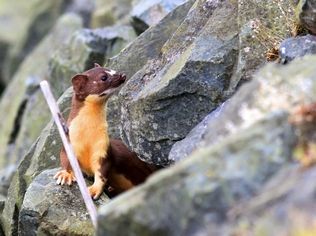 A weasel pokes its heads out of the rocks along the boat launch parking lot.

You typically don’t associate wildlife and the outdoors with business and industry, but the Port of Everett wishes you would.

It’s no secret that people want access to the waterfront; they’ve told port officials that quite frequently.

So through the years, the port has partnered with the city of Everett to create a system of trails for hikers, runners and bicyclists. On both ends of the trail are postage stamp parks

But with a few notable exceptions, like the summer ferry to the beach on the port’s manmade Jetty Island, public access along the waterfront isn’t well known and is certainly under used.

“A lot of people, somewhat surprisingly, still don’t know there are all these walking trails,” said Lisa Lefeber, the port’s public affairs administrator.

She’s talking about a system of trails developed in 2009 called the Marina District Waterfront Loop. It combines walkways along the port’s north and south marinas with those along W. Marine View Drive to provide a variety of opportunities for exercise coupled with a chance to see lots of wildlife.

“You have a better quality of life when you have a walkable waterfront,” Lefeber said.

And while many people don’t know what’s available, the wildlife have.

For example, the mudflats on the north end of the port once teemed with logs waiting to be shipped to Asia. The logs are mostly gone now, but the pilings used to tether them have been taken over by osprey.

On a short walk along W. Marine View Drive where the city has established two small view parks, Southview and Northview, there are five or six active osprey nests.

Depending on the state of the tides, it’s not unusual to see osprey or eagles soaring overhead looking for a meal. Ospreys also often dive to the tideflats to snatch a stick to add to their nests.

And, of course, where else would you expect harbor seals than around the harbor? On the opening weekend of boating season earlier this month, those walking behind Anthony’s Homeport restaurant were treated to seals looking for a quick meal around a net pen used to rear salmon. They didn’t appear to find one.

On my walks, I always try to include a trip along the parking area for the 10th Street Boat Launch because that’s probably the closest view of some of the osprey nests. They’re a ways off, so you may want to bring binoculars.

On a recent visit I saw something flash in the corner of my eye and looked down on the riprap to see a weasel dashing back into the rocks. But weasels are curious critters, and it wasn’t long before he poked his head out to have another look at me.

Probably the most popular access to the waterfront begins on July 5 with the opening of the Jetty Island ferry. It’s a short trip across the boating channel to a beach popular with families and with kite boarders.

Most people like the island for its shallow, sandy beach. But the area is teeming with wildlife and well worth the visit to see it.

Even though the ferry isn’t running yet, kite boarders are going there now using a variety of their own tiny watercraft: everything from paddle boards to canoes and inflatable kayaks.

You can too, but don’t forget your life vest and whistle for safety.

If you don’t have a boat, you can still get to a beach right now at one of the port’s least known areas: Pigeon Creek Beach and Viewpoint. It’s at the south end of the trail system and skirts the area where the port unloads and stores cargo from incoming ships.

To get there, you park at the end of Bond Street near the old train depot, walk across the railroad tracks, and walk or bike less than a mile.

First timers may be a little leery of the trip because it has all the charm of a prison exercise yard. You walk on an asphalt path between two chain-link fences; one keeps you off the railroad tracks and the other, topped with barbed wire, keeps you away from the cargo.

The walk is thankfully short, however, and the payoff is worth it.

Pigeon Creek is a gem of a park with a couple tables for picnics, and some logs and rocks for sitting. When the tide is out, there’s a nice beach and the water is pretty shallow. The view is stellar.