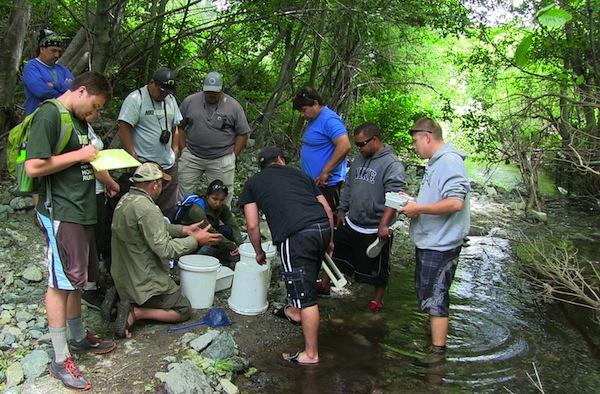 U.S. Fish and Wildlife Service
Service biologists provide tribal youth in northern California and southern Oregon with a unique opportunity to combine their cultural knowledge about the local ecology with the high-tech capabilities of NASA, the Service and other federal agencies.

A unique collaboration between a Klamath youth leadership development program and U.S. government researchers has won the U.S. Department of the Interior’s Partners in Conservation award for its use of traditional knowledge in conjunction with modern science.

The Klamath Tribal Leadership Development for Integrative Science and Traditional Ecological Knowledge Program, operating in northern California and southern Oregon, was one of just four recipients working with the U.S. Fish and Wildlife Service, the Klamath Tribes said in a media release. The partnership was one of 20 recipients overall out of groups working with various federal agencies on environmental conservation and won for its work in habitat restoration and the implications for fisheries management.

The U.S. Department of the Interior noted the unique melding of tribal cultural knowledge with today’s technology that got the program chosen out of the 14 partnerships that were nominated for the award by the U.S. Fish and Wildlife Service. Students worked first with tribal elders to gather ancestral knowledge of the region’s lands and waterways, then applied that knowledge to programs whose goal is to restore and manage native fish populations in the Klamath Basin. At the same time, the program gave tribal youth job skills, setting them up as future conservation leaders even as they contributed to present-day management of fish species that are important to indigenous culture and the ecology, the Fish and Wildlife Service said in a release.

“This partnership has the promise to result in some of the most advanced approaches to fisheries management in the country and will help prepare tribal youth for future careers in conservation,” the Fish and Wildlife Service said. “To date, these agencies have brought their collective resources and expertise with established and emerging technologies and have applied these to this collaborative effort, including remote sensing and unmanned aircraft systems. These technologies hold promise for improving our knowledge base and conservation effectiveness through energy efficient, cost-effective approaches to data collection with less impact on our ecosystems.”

Other partners involved were the Nature Conservancy, Humboldt State University, Southern Oregon University and the Oregon Institute of Technology, the Klamath statement said.

“The Department of the Interior is proud to recognize the accomplishments of those who are innovating and collaborating in ways that address today’s complex conservation and stewardship challenges,” said Department of the Interior Secretary Sally Jewell, who handed out the awards on January 16. “These partnerships represent the gold standard for how Interior is doing business across the nation to power our future, strengthen tribal nations, conserve and enhance America’s great outdoors and engage the next generation.”