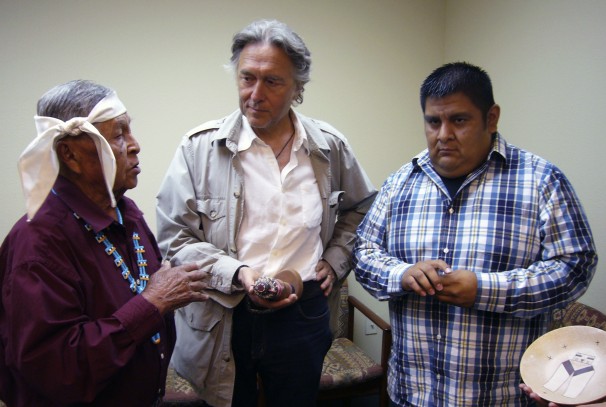 FLAGSTAFF, Ariz. — Two dozen ceremonial items bought last year at auction in France are set to return to Arizona in a way that pays reverence to the beliefs of American Indian tribes.

The masks and hoods invoke the ancestral spirits of the Hopi and Apache Tribes — who consider them living beings in keeping with tradition — and the expectation is they will be treated as such. That means shipping the sacred items free of plastics, bubble wrap or other synthetic material that would be suffocating. The items also should face the direction of the rising sun, have space to breathe, and be spoken to during their journey.

The shipping reflects the deeply sensitive nature of the items that the Los Angeles-based Annenberg Foundation quietly bought for $530,000 at a contested Paris auction two months ago with the goal of sending them back to their tribal homes in eastern Arizona.

The Hopi and two Apache tribes believe the return of the objects, kept largely out of public view, will put tribal members on a healing path and help restore harmony not only in their communities but among humanity.

“The elders have told us the reason we have the ills of society, suicides, murders, domestic violence, all these things, is we’re suffering because these things are gone and the harmony is gone,” said Vincent Randall, cultural director for the Yavapai-Apache Nation.

The tribes say the items — 21 pieces are headed to the Hopi, two to the San Carlos Apache and one to the White Mountain Apache — were taken from their reservations in the late 19th and 20th centuries at a time when collectors and museums competed for sensitive items from Western tribes. Tribal archaeologists say the objects also could have been traded for food and water, or unrightfully sold.

In Hopi belief, the Kachina friends emerge from the earth and sky to connect people to the spiritual world and to their ancestors. Caretakers, who mostly are men, nurture the masks as if they are the living dead. Visitors to the Hopi reservation won’t see the masks displayed on shelves or in museums, and the ritual associated with them is a lifelong learning process.

The San Carlos Apache recount a story of ceremonial items being wrenched from the hands of tribal members who were imprisoned by the U.S. military at Fort Apache. Journal entries from the time showed that hoods, as well as medicine bundles and other prayer items akin to crosses and holy water were taken, said Vernelda Grant, director of the Historic Preservation and Archaeology Department for the San Carlos Apache Tribe.

“Of course you’re going to be emotional, and of course it’s going to have an effect on your health, the welfare of your people,” she said. “It kills them, it killed us emotionally. Those items were taken care of until those times came. We were forced to hand them over so we could get what? A box of rations, a blanket?”

For the San Carlos Apache, the hoods represent the mountain spirits reincarnated in men who make and wear them in ceremonial dances for healing or when girls reach puberty. Each is fashioned by a tribal member endowed with a gift of being a spiritual leader. Once the hoods have been used, they are put away in an undisclosed location in the mountains, known only to the spiritual leader through a revelation from the “ruler of life,” or God.

If they are disturbed or removed, a curse of sorts can be placed upon humanity, Randall said.

Although the Apaches are among the most successful tribes in getting items within the United States returned to the tribes, they could do little to stop the sale in France.

The auction house argued that the items rightfully were in private collectors’ hands. A judge hearing the Hopi’s plea to block the sale said that unlike the U.S., France has no laws to protect indigenous peoples.

In a similar dispute in April, a Paris court ruled that such sales are legal. Around 70 masks were sold for some $1.2 million, despite protests and criticism from the U.S. government.

The Annenberg Foundation took note of the Hopi Tribe’s heartbreaking loss and in December employed a well-orchestrated, secretive plan to successfully bid on most of the items at auction.

The plan involved foundation employees placing bids by phone and keeping its plan private to save the tribes from potential disappointment. A French lawyer working for the Hopis and Survival International, Pierre Servan-Schreiber, said he spoke with the foundation using a discreet earpiece to keep the objects’ prices from skyrocketing as he bid on behalf of a U.S. benefactor.

“This is how we achieved this brilliant result,” Servan-Schreiber said in an email.

The foundation said it has complied with the tribes’ shipping requests to ensure the items are treated with care and respect. Those requests include shipping the items in specially designed, individual crates, turning them in a clockwise direction and entrusting them to the hands of men.

Should the items be handled contrary to Hopi and Apache practices, the tribes asked the foundation to apologize to the spirits and explain that it’s not intentional.

Two of the Hopi items, which have golden eagle and cooper’s hawk feathers, will require import permits from the U.S. Fish and Wildlife Service because the birds are protected under federal law. The sacred “Crow Mother,” which sold for twice its expected value at $171,000, requires an export permit from the French government, the foundation said.

U.S. Customs and Border Protection said it also would comply to the extent possible as the items enter the United States.

“It gives me immense satisfaction to know that they will be returned home to their rightful owners, the Native Americans,” said the foundation’s director and vice president, Gregory Annenberg Weingarten.

When the items reach the tribes after traveling overseas from France and to Los Angeles, there will be no extravagant celebrations — just quiet exaltation in knowing that their ancestral spirits will return to the mountainous areas of the San Carlos Apache reservation and to the hands of caretakers in Hopi villages.

“We understand their purpose for us. It’s not to be put up in the old circus shows of the bearded lady or the two-headed man,” said Sam Tenakhongva, the Kachina Society leader from the Hopi village of Walpi. “What it’s here for is to bring life, both for humanity and all living things.”