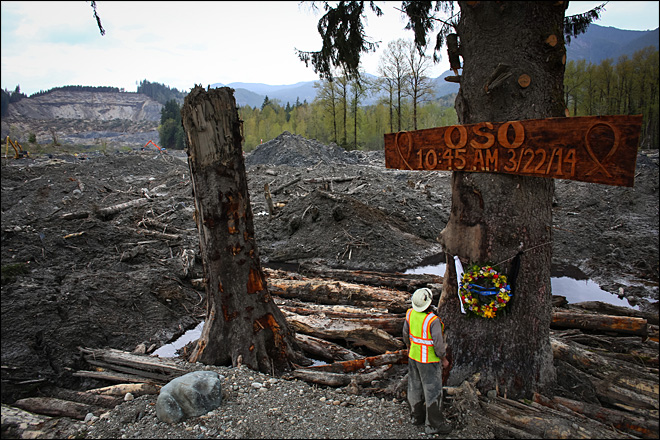 Ben Woodward looks up at a sign commemorating the moment of the Oso mudslide. The wooden memorial was attached to a towering spruce tree, one of the few in the debris field left standing after the disaster. (AP Photo/seattlepi.com, Joshua Trujillo)

EVERETT, Wash. – The Snohomish County sheriff’s office says search and rescue personnel believe they have located the last body from the deadly March 22 mudslide that killed 43 people at Oso.

Although the search for victims ended in April, workers have been screening debris and watching for the body of 44-year-old Molly Kristine “Kris” Regelbrugge.

Details were expected to be released at a news conference Tuesday afternoon in Everett.

Her husband, Navy Cmdr. John Regelbrugge III, also was killed in the slide that hit their home. His body was one of the 42 recovered earlier.

The discovery came on the same day that a team of scientists released the results of a report into the causes of the deadly mudslide.

The report says intense rainfall likely played a major role in triggering the slide, but that many other factors also contributed, such as previous landslide activity that also weakened the slope that collapsed.

The team says the slide, the deadliest in U.S. history, occurred in two major stages. A fast-moving mudflow remobilized a 2006 slide, bringing down old slide deposits across the valley. Another slide followed a few minutes later.

The report makes several broad recommendations that include doing an examination of landslide risks and communicating the information to the public.